Worth the wait: Folayang cops ONE lightweight title, stops Aoki 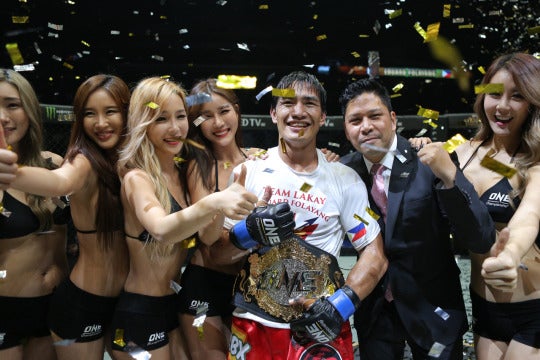 Golden moment for Eduard Folayang. Photo from ONE Championship

SINGAPORE—Eduard Folayang dropped to his knees then sprung back to his feet. He raised his hands in the air then was mobbed as he made his victory lap in the cage.

For years, Folayang had been patiently for his time and he finally had his moment Friday night.

Folayang not only won his first world title by seizing the ONE lightweight belt, he did it in the most spectacular way after turning who had been deemed an indestructible legend in Shinya Aoki to a mere mortal.

“I’m overwhelmed and really happy. I can’t explain it but I just looked up and said, ‘God really fulfills promises,'” an overjoyed Folayang, who was still in disbelief, said in Filipino. “Sometimes we rush but there are going to be upsets in life and we can’t turn our backs once we’re in those situations, so I learned my lesson in a different way [and it’s] a good story.”

“Shinya is a vey strong ground fighter. I just really prepared well for this fight.”

It was a crushing knee that made a snapping sound as it hit Aoki straight in the face that started the end for the fearsome Japanese star.

READ: ONE: Folayang primed for ‘make or break’ fight vs Aoki

The conclusion came just 41 seconds into the third round with Folayang hammering Aoki with everything he’s got, leaving his opponent stunned and pressed against the cage.

“I already saw he’s very open to get caught with that knee,” Folayang recalled.

It took Folayang five years to get a title shot and everyone around him—from his coach to stablemates—knew he wasn’t going to pass up a chance to come home a world champion.

Folayang was ready from the get-go. He was taken down several times in the first two rounds and managed to get back up on his feet, already an achievement by itself considering Aoki’s mastery of the ground.

READ: Fighters face off ahead of stacked ONE fight card in Singapore

But as the fight went on, Folayang’s confidence grew. He flashed a huge grin in the middle of the second round then landed definitive blows to the body in an array of punches and kicks.

So much have been said about Aoki’s ground game and how Folayang wouldn’t last long on his back.

But it turned out to be the other way around. Folayang’s striking power was too much.

Gold and silver confetti filled the air and finally—after a long and painful wait—Folayang had a gold belt shining around his waist.