All set to make history 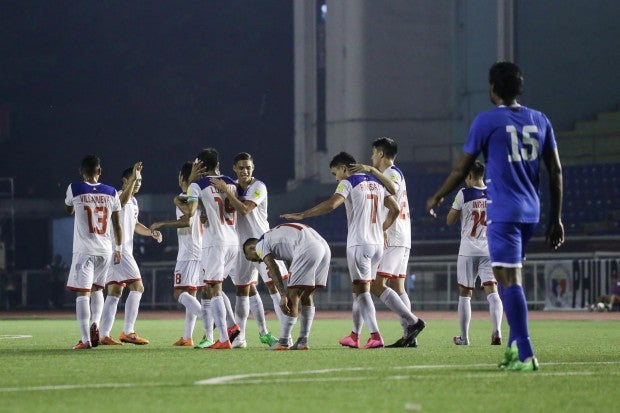 The Philippines’ lineup in the AFF Suzuki Cup has evolved over the past six years, but Azkals skipper Phil Younghusband insists the desire and determination to deliver a first title  in the competition for the country is stronger than ever.

As the Azkals start their quest against Singapore tonight, the country’s top international scorer called on his teammates to draw inspiration from past campaigns, especially when the Azkals bucked the odds to make history in the tournament.

“(Winning) it (Suzuki Cup) means everything to me now just as it meant to me in 2010,” said Younghusband who, along with older brother James, are the only remnants of the PH side that upset Vietnam in the 2010 tournament.

“I think for them (my teammates), it’s all about realizing how important this tournament is for Philippine football.”

The first step to the top is a tricky one for the Azkals as they face a familiar foe in the four-time winner Lions at 8 p.m. at Philippine Sports Stadium in Bocaue, Bulacan.

Defending champion Thailand, gunning for a record fifth crown, takes on Indonesia in the Group A opener at 4:30 p.m.

Younghusband knows dropping points from the first match could put the Azkals in a difficult situation of needing to play catch-up for the rest of the group stages.

The Azkals lost to Singapore, 0-1, in the semifinals in 2012, after drawing their last two meetings in the tournament including a 1-1 stalemate in 2010 in Hanoi.

The lead-up to the Suzuki Cup has been a roller coaster ride for the Azkals, who beat Kyrgyzstan, 1-0, in a friendly last week, before learning that Javier Patiño and Daisuke Sato will be unavailable due to club commitments.

Coach Thomas Dooley feels they have better preparation than the 2014 edition, where they also reached the semifinals.

“The level of confidence is high,” Dooley said. “You can feel the positive energy.”

Singapore coach V. Sundramoorthy, who had beaten the Philippines as a player in the 1983 Southeast Asian Games, believes they’ve got what it takes to beat the Azkals.

“We have to play with pride,” said Sundramoorthy.

The Suzuki Cup will be aired live over AksyonTV.