Southeast Asia’s biggest football stars are out to impress

No other tournament has brought so much joy and so much pain for the Philippine Azkals than the AFF (Asean Football Federation) Suzuki Cup, which kicked off yesterday at Philippine Sports Stadium in Bocaue, Bulacan. But while Filipinos will always remember the Suzuki Cup as the tournament that catapulted the Azkals to fame when they upset then-defending champion Vietnam in Hanoi six years ago, the competition is more than that.

It’s a showcase of the best that Southeast Asian football has to offer. And for a week, Filipinos will get to experience topnotch action on home soil.

The Azkals have been grouped with defending champion Thailand, four-time winner Singapore and perennial contender Indonesia in the tournament. From the four squads seeing action in Group A, Sunday Inquirer Sports picks out six players who could create the biggest impact for their respective teams in the tournament, expected to be watched by a combined live and television audience of 600 million, from the group stages to the finals on Dec. 17. Defender Amani Aguinaldo has played in so many big matches for the Azkals the past three years one can easily forget that he is only 21 years old. The only homegrown player to cement a starting role for the Azkals the past two years, the Davaoeño has been toughened by battles against some of Asia’s best in the AFC Challenge Cup and in World Cup Qualifying.

Quick on the tackle and a strong physical presence at the back, Aguinaldo now has a bigger responsibility for a team that has earned a reputation as a difficult side to break down. But unlike in previous tournaments, Aguinaldo won’t have the luxury of having someone more experienced than him on his side. With Rob Gier, Jerry Lucena and Juani Guirado all retiring early this year, the Global FC standout has seen different partners at the back, from Dennis Villanueva to Luke Woodland to Daisuke Sato.

It was his partnership with Sato in which he looked most comfortable. Unfortunately, though, the Filipino-Japanese left-back isn’t around for the AFF Suzuki Cup, leaving Aguinaldo with a huge burden of anchoring the backline. Whoever he will be paired up with at central defense, Aguinaldo knows he needs to play the tournament of his life to give the Azkals a chance of surviving even the group stages. 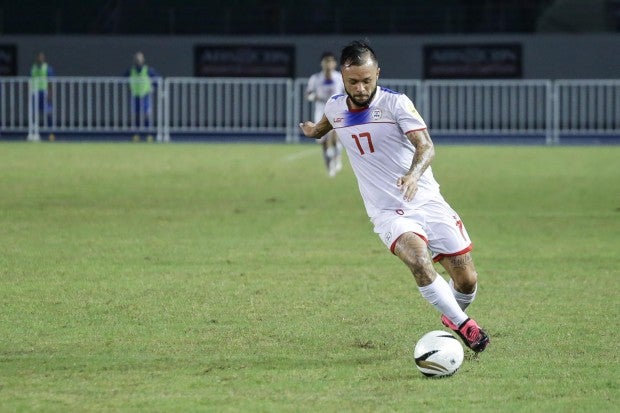 The Philippines may have reached the semifinals of the AFF Suzuki Cup in the last three tournaments, but their scoring boots seem to be missing when the stakes are high. In their six semifinal matches in that span, the Azkals have been shut out, starved of goals when they needed them most. This is where former Bundesliga campaigner Stephan Schrock could come in and give the Azkals a different look on attack.

Schrock’s experience and quality should come in handy as the Azkals hope to break down opposing defenses. With stability at the back line still suspect, the Azkals may have to rely heavily on scoring to be able to take points from matches, underscoring Schrock’s importance as a creative influence in the final third.

Schrock is coming off a productive first season with United Football League side Ceres-La Salle and has acclimatized to the conditions of playing in the country. Although he made an impact for Ceres in the AFC Cup, it is in the AFF Suzuki Cup where the Filipino-German will definitely cement his status as one of Southeast Asia’s best players. Chanathip Songkrasin’s size can be deceiving considering his impact on Thailand’s play. Drawing comparisons to Argentine great Lionel Messi because of his skills and pace, “Messi Jay,” as he is called back home, stands just 5-foot-3. But his presence is immense for Thailand regardless of the opposition.

Although the Thais play a quick, progressive style anchored on crisp, short passes and movement, plenty of its attack is generated by Chanathip, who was named the tournament’s most outstanding player two years ago. He creates and scores goals and is most dangerous when operating in pockets of space in and around the penalty box.

Chanathip’s game has grown over the years since emerging from Thailand’s youth setup. He scored the opening goal in the War Elephants’ 3-0 win over the Azkals in the second leg of the AFF Suzuki Cup semifinals in Bangkok two years ago. The Thailand-Philippines rematch happens on Friday. There has been little to cheer about for Singapore at the international level in the past months following defeats and scoreless games in friendly matches. But the Lions have shown the ability to rise from the doldrums in the AFF Suzuki Cup. The city-state has won it four times—a record matched only by Thailand. And although they are coming off one of their worst run of results heading into the tournament, the Lions boast of quality players who can inspire a turnaround.

Among their players to watch is holding midfielder Harris Harun, who plays club football for Malaysian giants Johor Darul Ta’zim. He has close to 70 appearances for Singapore, which he started representing at senior level at age 16.

The classy Singaporean has shown the ability to control games at midfield with his combative and playmaking abilities. He missed out on the AFF Suzuki Cup when Singapore won it in 2012 due to an injury. But he returned in 2014 to score one of the goals of the tournament—a cracking volley from outside the box against Burma (Myanmar). Can he get the Lions over the hump this time?

It’s tough to gauge where Indonesia stood heading into the AFF Suzuki Cup, especially because they were in the freezer for most of the year, serving a suspension imposed by the International Football Federation (Fifa). The ban was lifted in the middle of the year, giving the Garuda a few months to build up for the AFF Suzuki Cup.

Indonesia can never be counted out. The country has the most rabid supporters and its league is one of the strongest in the region. The Garuda’s key player is someone who plies his trade in Europe.

Stefano Lilipaly is a Dutch first-division veteran who once scored against Eredivise giants PSV. With star striker Irfan Bachdim ruled out due to a leg injury, Lilipaly has been thrust into the limelight.

The attacking midfielder, now with Telstar in Dutch Division 2, actually made his international debut in a friendly against the Azkals three years ago, setting up a goal in the 2-0 win. He made one more appearance after that stint. The Suzuki Cup is Lilipaly’s coming-out party. Thai player Teerasil (10) heads the ball against Indonesia during their Suzuki Cup football final round match at the Philippine arena in Bocaue, Bulacan province, north of Manila on November 19, 2016. / AFP PHOTO / TED ALJIBE

Having missed out on Thailand’s AFF Suzuki Cup victory two years ago due to club commitments, the highly regarded striker Teerasil Dangda is determined to carry the War Elephants to back-to-back crowns.
Dangda enters the tournament in fine form, scoring twice in the 2-2 draw against Australia last Tuesday in their World Cup Qualifying match in Bangkok.