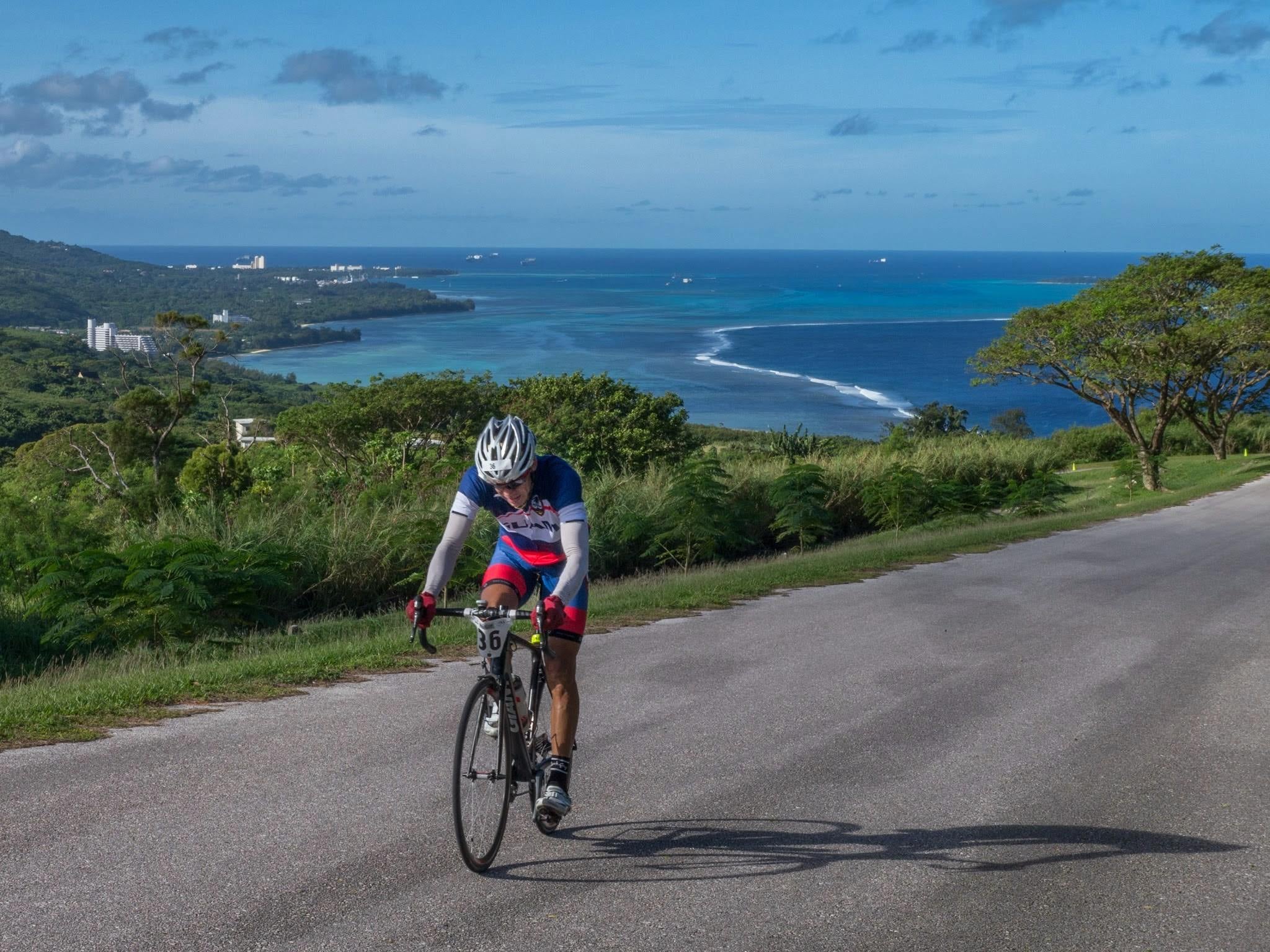 2013 Hell of the Marianas. Photo from the official HOM Facebook acount.

Top Filipino cyclists and triathletes try to conquer the most challenging hills Saipan has to offer in this year’s Hell of the Marianas Century Cycle, dubbed the toughest bike race in Micronesia, on December 3.

Mark John Galedo, a multiple Tour champion, of 7 Eleven–Sava Road Bike Philippines and John Paul Morales of Navy-Standard Insurance are set to compete in the Open Category of the 100-kilometer race, where no Filipino has won the gold medal before.

But it’s going to be a tough race for the Filipino bets, not only because of the course which is said to resemble an erratic heart beat monitor because of changing elevations, but also due to the level of competition.

The Hell of the Marianas has consistently drawn elite pro cyclists from all over the world and this year is not going to be any different, especially with bigger prizes at stake to celebrate the race’s 10th year. FILE – Track specialist Jan Paul Morales of Philippine Navy celebrates as he rules Stage 12 in which everyone, it seems, arrived within 20 seconds of the lead peloton except overall leader Ronald Oranza of PLDT/Spyder. CONTRIBUTED PHOTO / WILFRED LADANGA

Galedo and Morales, both members of the Philippine national team, remain confident they have the experience to give cyclists from Japan, China, South Korea, Taiwan, Guam, United and Russia among others, a run for their money.

“I will do my best to win the race. I heard it’s also like the route in Olongapo,” Morales told INQUIRER.net in Filipino. “We will help each other so that a Filipino could win.”

For his part, Galedo is no stranger to killer laps that this scenic race course, which will take the participants along nearly every major hill in the island located in the Western Pacific, presents.

“I have been training really hard. I’m familiar with this kind of course and my racing exposure has been continuous so I don’t think I will have a hard time adjusting to the speed and climate,” Galedo said in Filipino. According to race coordinator Ricky Castro, who is one of the thousands of Filipinos residing in Saipan, at least 150 cyclists are throwing their hat in the ring across all divisions this year.

Also competing for the Philippines are triathletes from Team Ford Forza, Joseph Miller and Ian Solana, who will get their mettle tested in the age-group division of the bike race.

“I like it because I will be pushed hard and forced to train long for my bike which is important in triathlon,” said the 40-year-old Solana, who had an impressive finish in last August’s Ironman 70.3 Asia Pacific Championship in Cebu.

Jazy Garcia, son of Filipino cycling champion Jesus Garcia Jr., is also in the race and hopes to surpass his second place finish in 2008.

Garcia is a two-time Olympian for Guam but now resides in his hometown in Mangaldan, Pangasinan.

The race will start and end at the Mariana Resorts & Spa and will pass by popular tourists spots like the Banzai Cliff, the Grotto and the Bird Island. Ian Solana at the finish line of Ironman.

Castro is hoping that more Filipinos cycling enthusiasts will try their luck in future Hell of the Marianas races now there are direct flights from Manila to this US Commonwealth, making the travel more convenient.

“Now that Philippine Airlines has direct to Saipan, this opens the gate to Filipino professional cyclist and more cycling enthusiasts to try Hell of Marianas,” he said.

Hell of the Marianas is an open event for professionals and amateurs alike with no qualifying time or races needed for participation. There is a 19 and below category for young cycling enthusiasts and 60+ for the veteran studs.