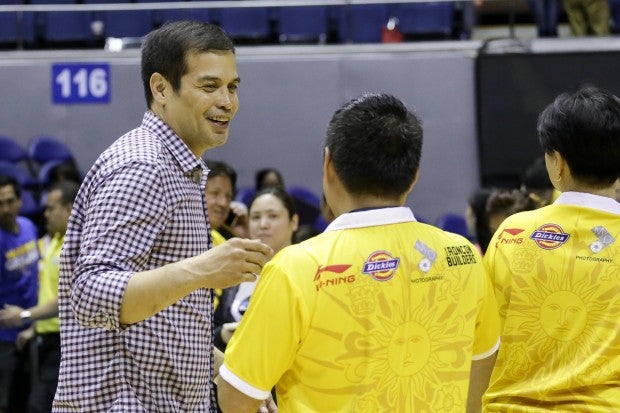 When does a PBA stalwart admit that it’s time to put out the competitive fire inside for good and walk away from the adulation he gets for playing in the glamor league?

Some have taken it in stride, but there are a few who refuse to read the writing on the wall and have instead extended their fading career using as an excuse their love and passion for the game.

“It’s really tough, especially when you have to say goodbye to the fans,” says four-time PBA MVP Alvin Patrimonio, who ended his career in Asia’s first play-for-pay basketball league in 2005. “I cried because I treasured their (fans) love and support.

“You really have to think it [retirement] over; in my case, a couple of years before I said it was all over,” adds Patrimonio, for 17 seasons the face of the Purefoods [now Star] franchise. “You can feel it, when the [playing] minutes are dwindling, and then you begin to say that everything has to come to an end—even this career.”

With 857 games under his belt for Purefoods—his one and only PBA team, Patrimonio once thought he could play as long as the legendary Robert Jaworski did.

“But he [Jaworski] was an exceptional case,” he says. “The old saying that ‘the mind is willing but the body is not’ was very true in my final years. The body simply refused to cooperate.”

Before the PBA’s 42nd Season got under way two weekends ago, several players, former star or otherwise, knew the inevitable was at hand and took the cue to fade away. They had no other choice; teams wouldn’t give them contract extensions.

Yet, several ageing stars now past their primes but are still very competitive kept their slots in their respective teams for the season or were traded to other teams. Heading the greying brigade are NLEX’s Asi Taulava, the oldest in the lot at 43, Phoenix’s Mick Pennisi (41), Barangay Ginebra’s Jay-Jay Helterbrand (40), TNT KaTropa’s Danny Seigle (40), Alaska’s Dondon Hontiveros (39), Star’s Rafi Reavis (39), and Mahindra’s Gary David (38).

Vergel Meneses, the former Jose Rizal University Heavy Bomber in the NCAA who would go on to win a PBA MVP award and become one of the pro league’s 25 Greatest Players ever, admits to being in a state of denial for a while before hanging up his sneakers at the age of 36. That was in 2006, when the “Aerial Voyager” believed he still had a lot of high-flying moves left.

Like Patrimonio, Bong Ravena recognized the signs in 2005 and called it quits, giving way to a new batch of talented rookies that seemed to sprout from the amateur leagues and from Filipino-American communities in the United States.

“Younger players then were simply quicker and stronger than I was,” says Ravena, who beat Meneses for the 1992 Rookie of the Year award and played in the PBA for 12 seasons.

Says Meneses, the 1995 MVP: “Retirement became inevitable when I started feeling that my role in the team was diminishing by the game. I knew it was time to go. Even if I practiced so hard and was still doing well, the coach didn’t have much use for me anymore.”

Meneses eventually coped with retirement a couple of months after saying good bye to the league. The player whose one-on-one skills were nurtured and made famous by coach Yeng Guiao at Swift with the “iso [isolation] play” says retirement allowed him to refocus on coaching and to teaching talented younger players.

Ravena says old or washed-up players who refuse to go are simply unwilling to “surrender their passion for the game.”

“That’s why we play, anyway,” he says. “But it came to a point when I felt that even the passion and drive were not there anymore. That was the reason for my decision to retire. Plus, of course, the new players were coming in and I simply couldn’t keep up. The competitor in you simply has to accept certain signs. You really have to admit that it (career) can’t go on forever.”

Patriminio, the PBA MVP in 1991, 1993, 1994 and 1997, saw the signs when he was relegated to Purefoods’ second string in his later years. “I realized that I really couldn’t help the team that much and I couldn’t accept being a third-string player when the next season came. That’s when I said that I was done.

“When I decided to retire, James (Yap) and Kerby (Raymundo) were new to the team,” he recalls. “I saw in them Purefoods’ future, that the team’s winning tradition were in good hands. It was time for me to pass the torch.”

Patrimonio says he got used to retirement “after a while” and found a way to enjoy the game by “just watching the new players” do their thing on the court: “There is also a thrill in that.”

Ravena, the father of top amateurs Kiefer and Thirdy, says he didn’t take retirement hard because he knew he had done well taking care of his family. “I was smart with my money and really had no trouble walking away from the game,” he recalls.

Believing he could still play for a couple more years, Meneses was initially upset that Talk ‘N Text, his seventh and last PBA team, could not give him a contract extension. “Of course it hurt at that time because I felt that I still had two to three seasons left in me,” he says. “But after a while, you realize that you’re OK, and that you have had one hell of a ride, a career. That gave me peace.”

Patrimonio, Ravena and Meneses share the opinion that some ageing and “retirable” PBA players find it hard to go because they can’t hope to earn as much outside the league. They lament rumors that certain active and recently retired players have gravitated to gambling to “sustain their former lifestyles.”

“That’s a no-no for me,” says Meneses, one of the league’s highest-paid players during his prime. “I never went into [gambling] because I knew that you would be one lucky guy if you get to play 15 years in the PBA. I invested my money wisely for my kids. But I never invested in anything that went beyond the contract that I signed [with my team].

“I hope they [rumors] are not true because it’s just a pity,” Meneses adds. “The problem with us [pro players] is that we have short shelf lives, and there’s no second wind as far as our earning capacity is concerned.”

The doting father to tennis aces Clarice and Christine, Patrimonio also made sure that his children received the best education and encouragement to pursue their chosen careers. He says he readily accepted the reality that retirement meant the end of a top-paying job.

“You’ll be shocked because after a long career, when you were used to earning so much, you suddenly earn nothing, zero,” says Patrimonio, the first PBA player to be signed to a P500,000-a-month contract—a result of the celebrated attempt by the Pepsi ballclub to pry him out of Purefoods for P30 million, spread over five years.

Patrimonio, Meneses and Ravena are still in basketball, although all three are now in the sidelines with a managerial or coaching job or another. Convinced that they stepped away from the game at the right time, they have no regrets.

They all saw the sunset coming and faded away.