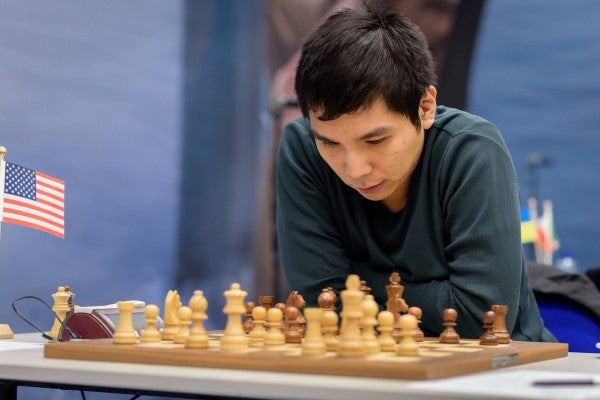 Wesley So remained at the helm of the 79th Tata Steel Masters Chess despite being held to another draw by Ukrainian Pavel Eljanov Saturday in Wijk aan Zee, the Netherlands.

The Philippine-born So, now representing the United States, climbed to 5.0 points and kept his distance from 4.5 pointers Eljanov, world champion Magnus Carlsen of Norway and resurgent Wei Yi of China after seven rounds of the all-Grandmaster event.

The top-seeded Carlsen was also forced to split the point with local star Anish Giri while Wei disposed of another Dutch, Loek Van Wely.

Though handling white, So was unable to break Eljanov’s defenses and agreed to split the point in 38 moves of a Guioco Piano.

The 23-year-old So, who was also forced into a standoff by Indian Baskaran Adiban in the sixth round, saw his live rating fall to Elo 2816.6 from 2817.3, but stayed as world No. 3 behind Carsen and fellow US stalwart Fabiano Caruana, an absentee in the  tournament with an average rating of 2751.

The second-seeded So, board 3 gold medalist in the Baku Chess Olympiad and overall winner of the 2016 Chess Tour, is battling Russian Sergey Karjakin in the eighth round Sunday.

Carlsen, the top seed, is pitted against Hungarian Richard Rapport.