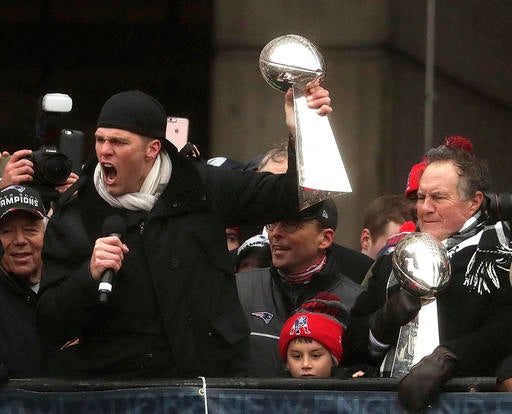 Members of the New England Patriots hold up Super Bowl trophies and gesture to the crowd during a rally Tuesday, Feb. 7, 2017, in Boston to celebrate Sunday’s 34-28 win over the Atlanta Falcons in the NFL Super Bowl 51 football game in Houston. (AP Photo/Elise Amendola)

Riding in duck boats, a trademark land and water vehicle familiar to the Boston faithful, the Patriots slowly made their way down Boylston Street in downtown Boston on the way to City Hall.

Fans chanted Brady’s name at times and he even caught a football and threw it back with a perfect spiral to a telecaster. At City Hall, a pep rally allowed Brady to speak with the fans.

“One more,” Brady yelled. “I told you we were going to bring this sucker home and we brought it home. Thank you guys. We do it for you.

“These aren’t easy to do, but this team gave everything it had and… damn, that game was hard. That game was real hard, but you know what, we’re going to remember this moment for the rest of our lives.”

Belichick led fans in chants of “No days off”.

“These players, they work harder than any team I’ve ever coached,” Belichick said. “They came to work every day and there were no days off.”