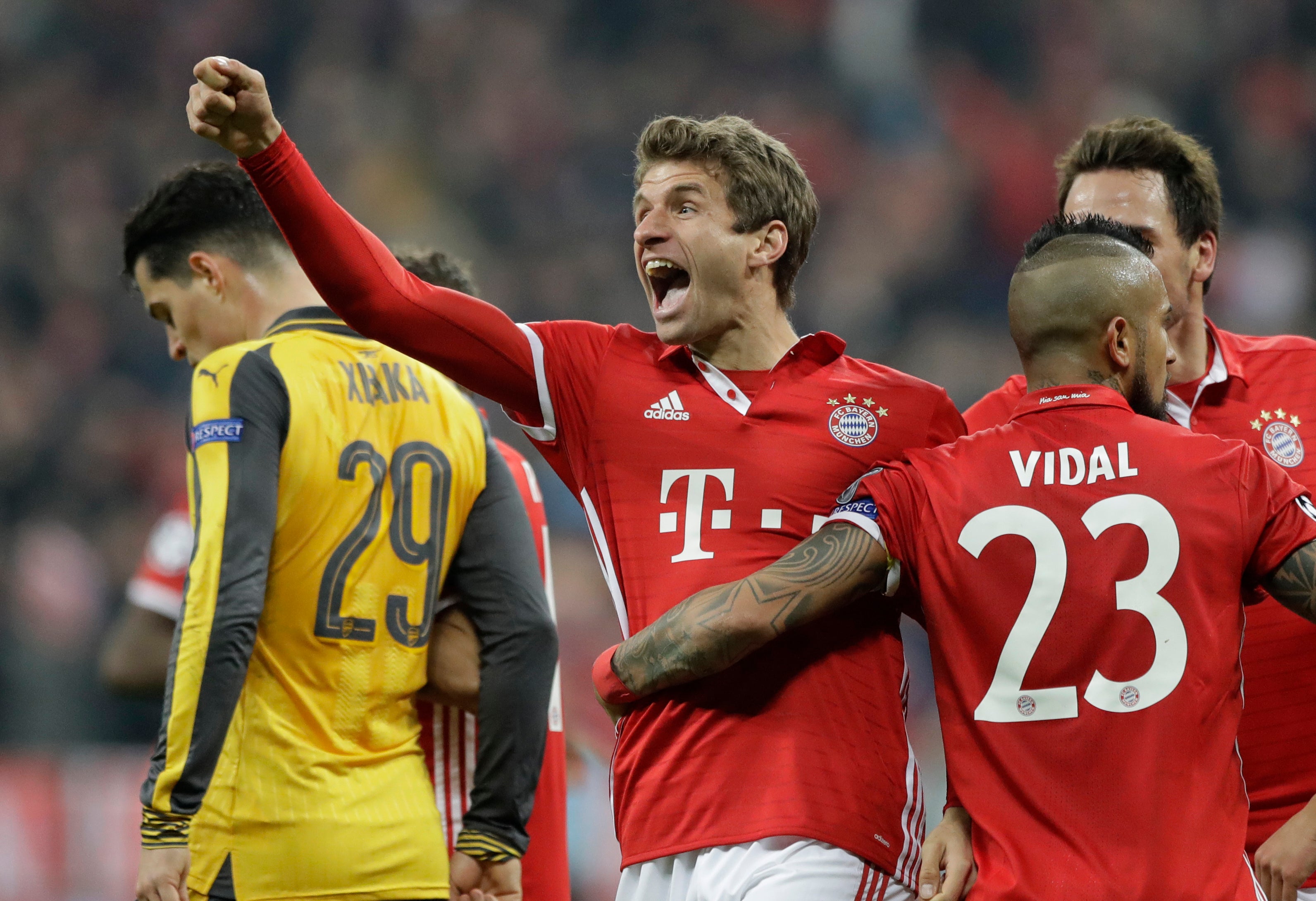 “That was a good performance, which perhaps wasn’t so expected,” said Thiago, who scored twice.

“We were playing at home, knew we had to score a few goals and everything worked very well after the break.”

Bayern knocked Arsenal out at the same stage in 2005, 2013 and 2014 and look comfortably placed to make it four times after romping through Wednesday’s first leg.

The Allianz Arena defeat raises the pressure on Wenger for the return leg on March 7 with only Alexis Sanchez’s away goal for comfort.

The result matched the 5-1 group-stage thrashing Arsenal received in Munich in November 2015 — the club’s joint record away defeat in Europe.

Robben also admitted he was surprised by the big win.

“I am a bit surprised that we played so well, but on the other hand, I know the team has great character and can move up a gear when it matters.”

Bayern hit top gear after the break with a flurry of goals in quick succession.

Robert Lewandowski headed Bayern back into the lead on 53 minutes before Thiago added two in quick succession while Thomas Mueller came off the bench to complete the rout.

Bayern spent the opening minutes camped in the Arsenal half and took the lead on 10 minutes through Robben’s wonderful strike.

The Dutch winger cut in from the right and curled home a superbly-weighted shot off his left foot from outside the area.

Arsenal then raised the tempo and started pressing the hosts.

Bayern defender Mats Hummels was given a yellow card for fouling Sanchez just outside the box.

Mesut Ozil drilled the resulting free-kick at Neuer, but moments later Arsenal were awarded a penalty.

Lewandowski mistimed a clearance in the area and struck Laurent Koscielny’s raised leg.

Neuer saved Sanchez’s penalty, but the Chile international drilled home the rebound at the second attempt.

It was the valuable away goal Bayern had talked about not conceding in the match’s build-up.

There were equally furious Bayern protests at the other end when David Alaba’s cross struck Hector Bellerin on the hand, but the referee waved play on.

It was 1-1 at the break, but Bayern stepped up the pressure in the second half.

Robben released Philipp Lahm who put in a perfect cross and Lewandowski twisted to tuck his header past David Ospina’s reach.

The Poland hot-shot then flicked Xabi Alonso’s pass into Thiago’s path and the former Barcelona midfielder fired past Ospina.

Lewandowski hit the crossbar on 61 minutes, but Thiago added his second when his shot from the edge of the box deflected past the Arsenal goalkeeper on 63 minutes.

Mueller came on for Lewandowski on 86 minutes and added Bayern’s fifth two minutes later after Thiago squared the final pass.