Kim Kianna Dy is finally the no.1 player this week.

Jaja Santiago, meanwhile, is still not included. While she is one fine player, arguably the best individual this season, it’s hard to make a case for her to be included in this week’s list when her team lost two straight games within a week.

With UP also playing just one this week, which ended in a three-set loss to Ateneo, no one from Diliman also made the list. Kim Kianna Dy has rightfully earned the top spot this week after leading De La Salle to two straight wins to improve to 5-1.

Never mind the fact that the Lady Spikers’ opponents were both on the opposite end of La Salle’s top position, but Dy has been consistently spectacular for La Salle.

Dy has averaged 13.5 points per game in their past two wins, and that is actually higher than her 12 points-per-game average this season.

That consistency, and the fact the Lady Spikers went two-of-two this week, is enough to put Dy atop the list. Toni Rose Basas’ inclusion in this list is no surprise, but the same cannot be said on how she got here.

Far Eastern University played just one game this week and that was against NU, and head coach Shaq Delos Santos did something out of the ordinary prior to the match.

Delos Santos purposely benched Basas for their match against UE the previous week, and that was to hide his opposite hitter from the scouts of the Lady Bulldogs.

That sly move paid off and Basas went off against Santiago and the Lady Bulldogs as she scored a season-high 20 points.

Basas may have played just one game but it was against a championship contender and she played her best game despite sitting out the previous one.

And her output was vital in sending NU to its second straight loss in the tournament. There’s just something about how Jia Morado sets up the Ateneo offense.

Sure she’s got capable hitters in just about the other five lasses she’s in floor with,  but Morado’s magic is the fact that she’s the catalyst of the UAAP’s most potent offense.

Ateneo is the top spiking team in the league with a conversion rate of 39 percent and that is thanks to Morado’s pinpoint passes to her hitters.

If Ateneo had one major point-getter, in the case of Alyssa Valdez in previous seasons, Morado would be lower in this list but now that the Lady Eagles play with a balanced offense it’s a no-brainer why Morado gets a higher rank.

Morado has averaged 37 excellent sets in Ateneo’s two wins this week and those victories were enough to propel the Lady Eagles to a 5-1 slate and a tie for first place with La Salle. 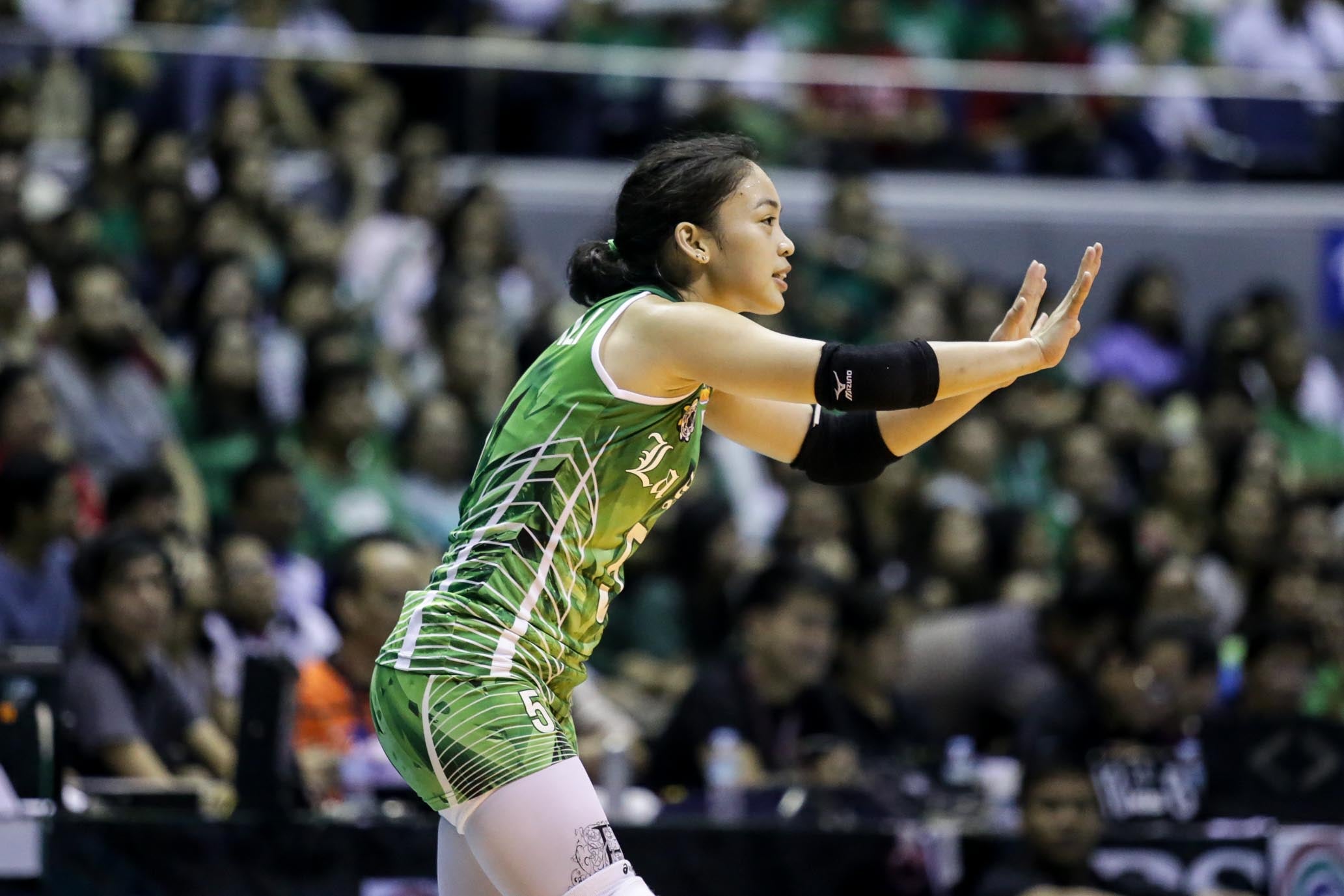 If Kim Dy brings the hurt on offense, Dawn Macandili is the cause of the other teams’ frustrations.

Macandili has been nothing short of amazing for La Salle. She is anchoring the defending champions’ defense from the ground, and while letting her teammates punish the other team with their offense.

La Salle’s diminutive dynamo is the best receiver in the league with just a hair below 50 percent in her success rate in receives and she’s the second-best in terms of digging.

Macandili sits below University of the East’s Kathleen Arado in terms of digs but with the team’s opposing records, this spot belongs to the lass in green. Bernadeth Pons has the ability of being good on both ends of the floor.

Far Eastern University’s talisman is the second-leading scorer in the league with a total of 80 points and she’s also in the top five in the Best Diggers list.

Not that the Best Diggers are mainly composed of liberos and setters, and Pons’ inclusion in that list speaks volumes of her two-way capabilities.

In FEU’s game against NU this week, Pons scored 18 points and registered 20 digs as she helped the Lady Tamaraws tack on a 3-2 record. Cherry Rondina’s unbound energy has finally landed her a spot in the list.

Sure UST’s 2-3 overall record is a tad bit disappointing but the Golden Tigresses went one-of-one this week and Rondina was surprisingly stable in that victory against Adamson University.

Rondina had 15 points in the win, the only double-digit performance in that game, and quite frankly that’s enough case for her inclusion in the list. Bea De Leon is back on the list and so is her mean streak.

There’s a curious case about De Leon. Yes, she’s not her team’s main option on offense because that distinction belongs to Jhoana Maraguinot and Mich Morente, but her guts and her tenacity make her special.

De Leon is the rowdy force of Ateneo’s engine, and while Morado brings a certain calmness to their squad’s atmosphere, the middle blocker is not afraid to show a lot of fierceness on the floor.