Andy Murray wins his first title of the year in Dubai 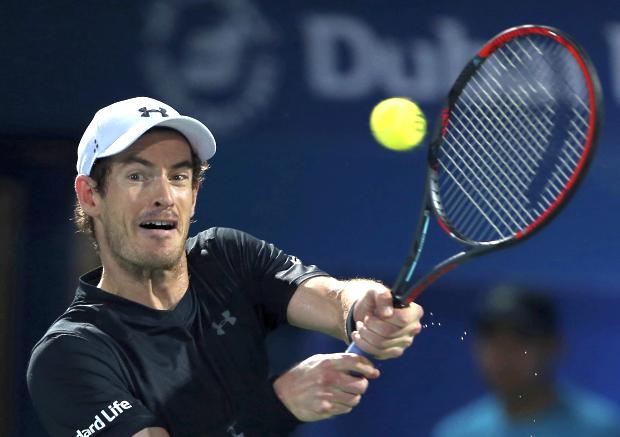 Andy Murray of Great Britain returns the ball to Fernando Verdasco of Spain during the final match of the Dubai Tennis Championships, in Dubai, United Arab Emirates, Saturday, March 4, 2017. (Photo by KAMRAN JEBREILI/AP)

DUBAI, United Arab Emirates — Andy Murray captured his first title of the year and became the first British man to win the Dubai Tennis Championships in its 25-year history when he defeated Fernando Verdasco 6-3, 6-2 on Saturday.

This was Murray’s seventh final in his last eight tournaments, and 14th in his last 16 dating to last May in Madrid.

The only two tournaments he failed to make the final in that period were the 2016 U.S. Open and 2017 Australian Open.

“It’s been a great run. Can’t complain about much,” Murray said.

“Giving yourself a lot of matches gives you confidence to go into those big events (Grand Slams).”

Dubai was the first tournament Murray’s played since he lost in the Australian Open fourth round. Since that defeat he’s been recuperating from a bout with shingles.

“After the break that I have had, to get five matches in, six if you include the doubles, in six days is a really positive thing physically,” he said.

The top-ranked Murray, who was a Dubai finalist in 2012, improved his career record to 13-1 over Verdasco.

The first three games were service breaks as the players attempted to find their range in the final.

Verdasco had the service break until the Spaniard was broken by Murray in the sixth and then the eighth games to take the first set.

Murray broke Verdasco’s serve twice in the second set, in the third game with a forehand winner, and in the seventh on a third break point.

The 35th-ranked Verdasco, a former top-10 player, has never beaten a No. 1-ranked player in 12 career attempts.

“He pushes you,” Verdasco said. “At the same time, I didn’t really feel, of course, as comfortable or hitting the ball as clean as days before.”

Murray became the fourth player this year to win a title having saved match points en route to the title. He faced a career high seven match points in defeating Philipp Kohlschreiber in the quarterfinals. –Sandra Harwitt