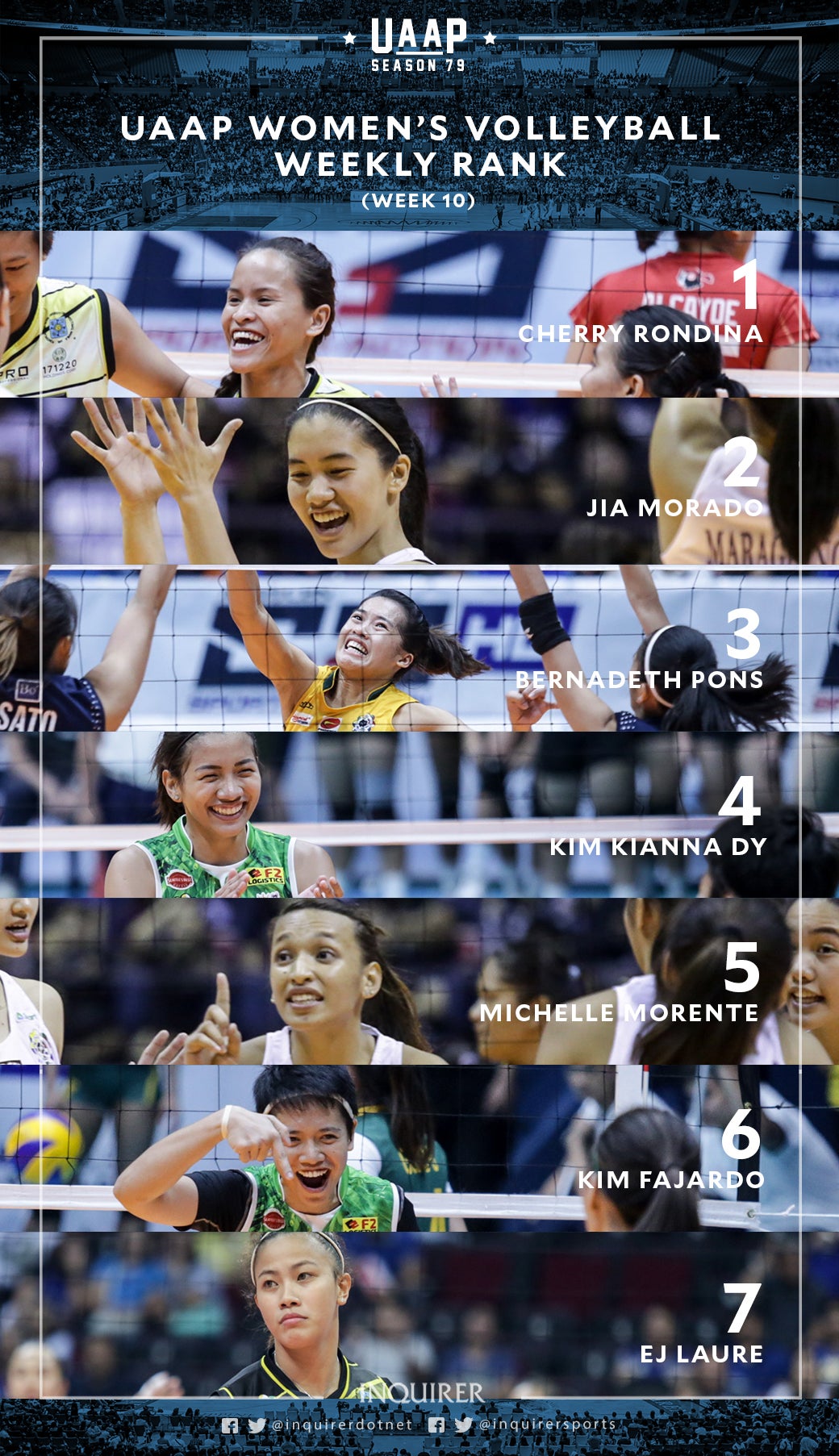 The eliminations are over and it’s time for the best ladies to take their places in the grand ball.

Ateneo, De La Salle, University of Santo Tomas, and Far Eastern University make up the Final Four cast but only seven women deserve to be in this list.

So ladies and gentlemen, boys and girls, here it is, the culmination of the eliminations—your top 7 volleyball players of Week 10. 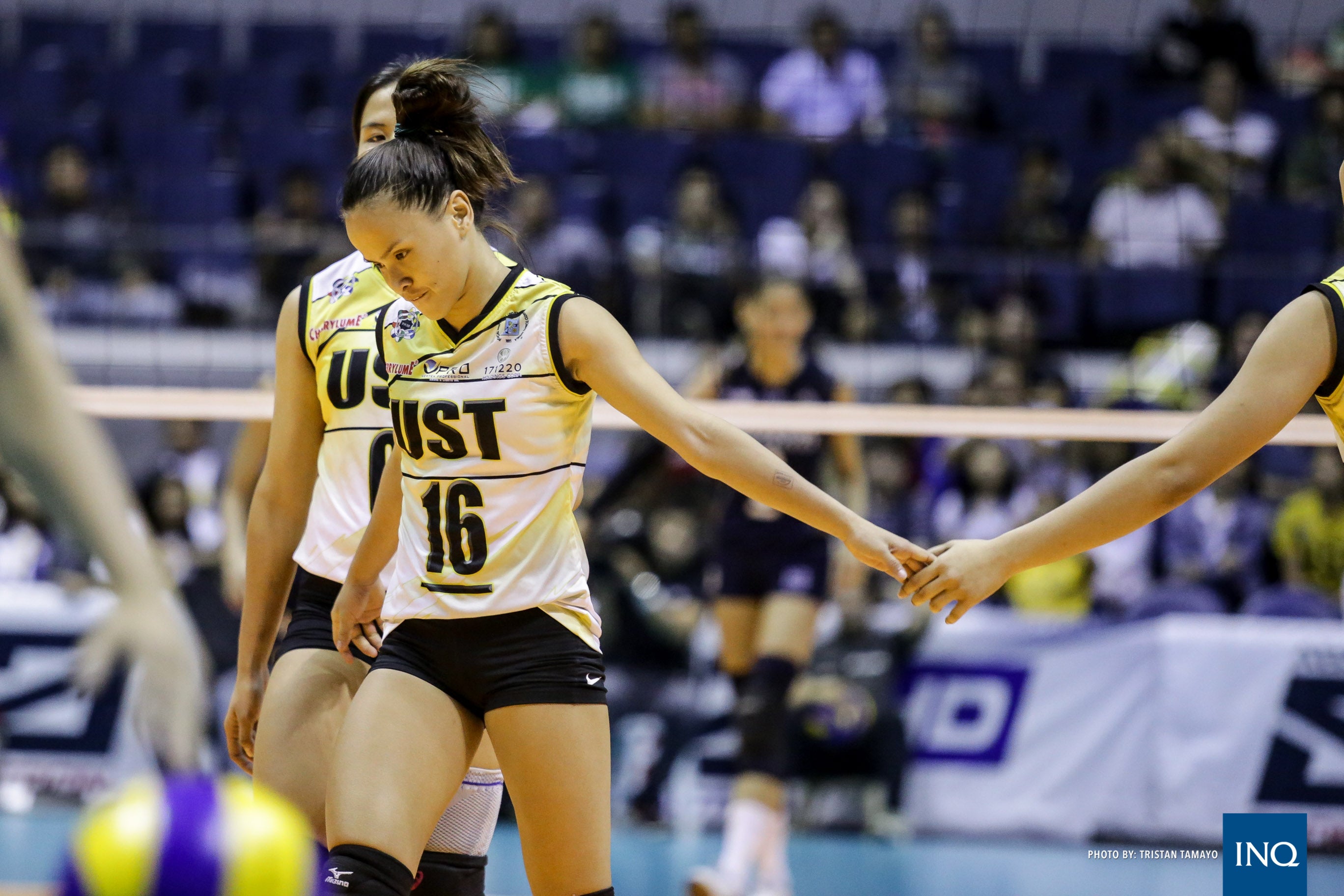 Cherry Rondina, in the Golden Tigresses’ most important game of the eliminations, went out and showed to those in attendance and the spectators watching at home how the Cherry Bomb detonates.

Her 22 points against National Univertsity catapulted UST not only to the third seed with a 9-5 record, but also to its first Final Four appearance in almost half-a-decade.

UST’s skipper was everywhere in the fifth set and she eventually put the Golden Tigresses at match point, 14-12, and that paved the way for NU’s exit off the Final Four picture.

“I gathered my teammates in a huddle, and I told them to think about our goal for the team, all the sacrifices, the hard work,” said Rondina. “I was the first one to tell them ‘this game is ours.’” 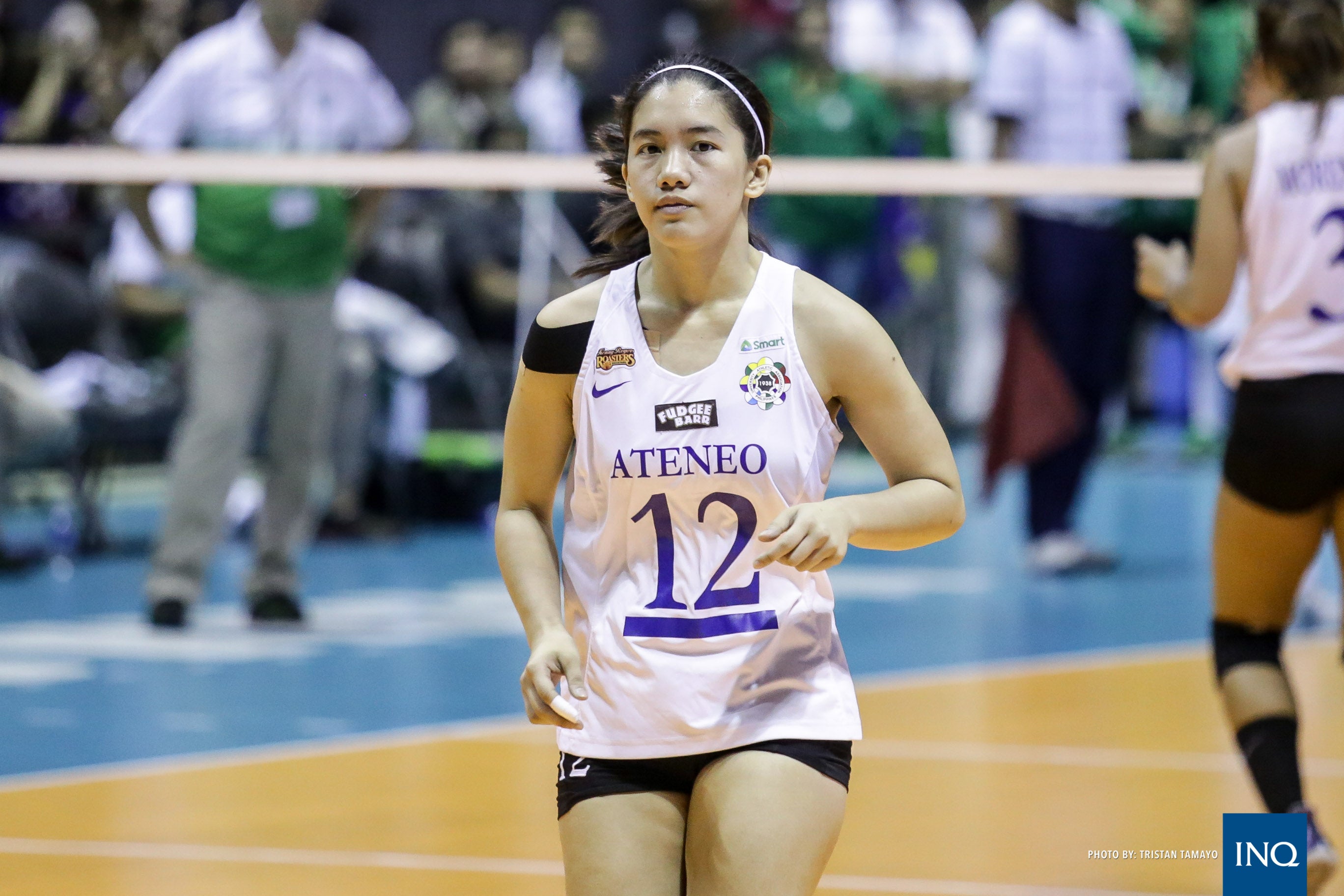 Ateneo’s harmonic dominance of the elimination round would not have found the perfect note had setter Jia Morado not stood at the conductor’s stand.

Morado made sure the Lady Eagles would never miss a beat come Season 79 and she proved that in their final eliminations match against La Salle when she set up 34 scoring spikes.

Morado’s final play, however, wasn’t her trademark assist but a diving reception that led to Gizelle Tan setting up Mich Morente for the finish. 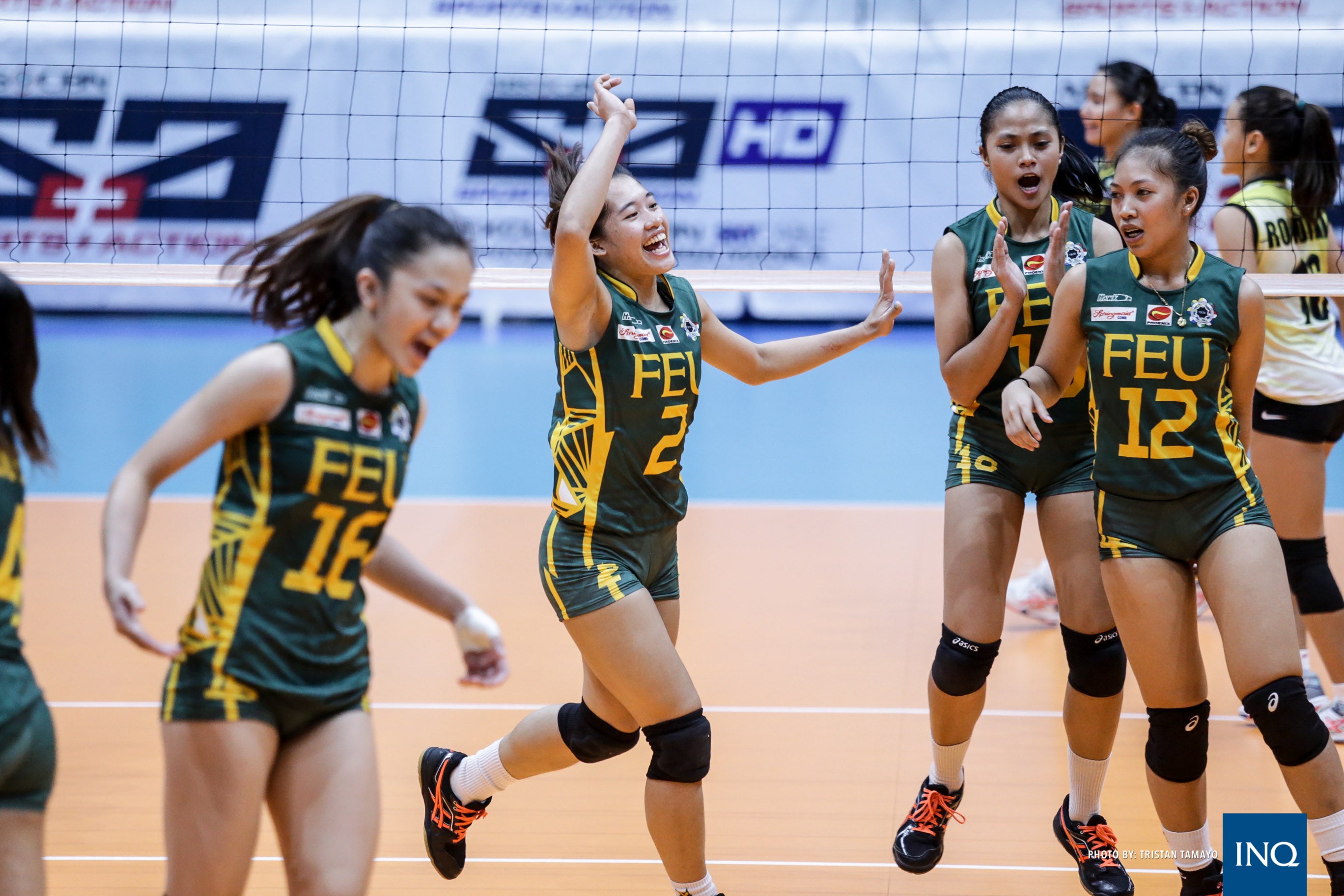 Time and time again, Bernadeth Pons has backed up her status as the OG stat-stuffer of the UAAP women’s volleyball tournament.

In the Lady Tamaraws’ final elimination game, Pons practically made herself known through the match’s stat sheet.

Pons finished with 12 points, eight excellent digs, and six excellent receptions, against University of the Philippines in a game FEU won in in straight sets, 25-16, 25-16, 27-25. 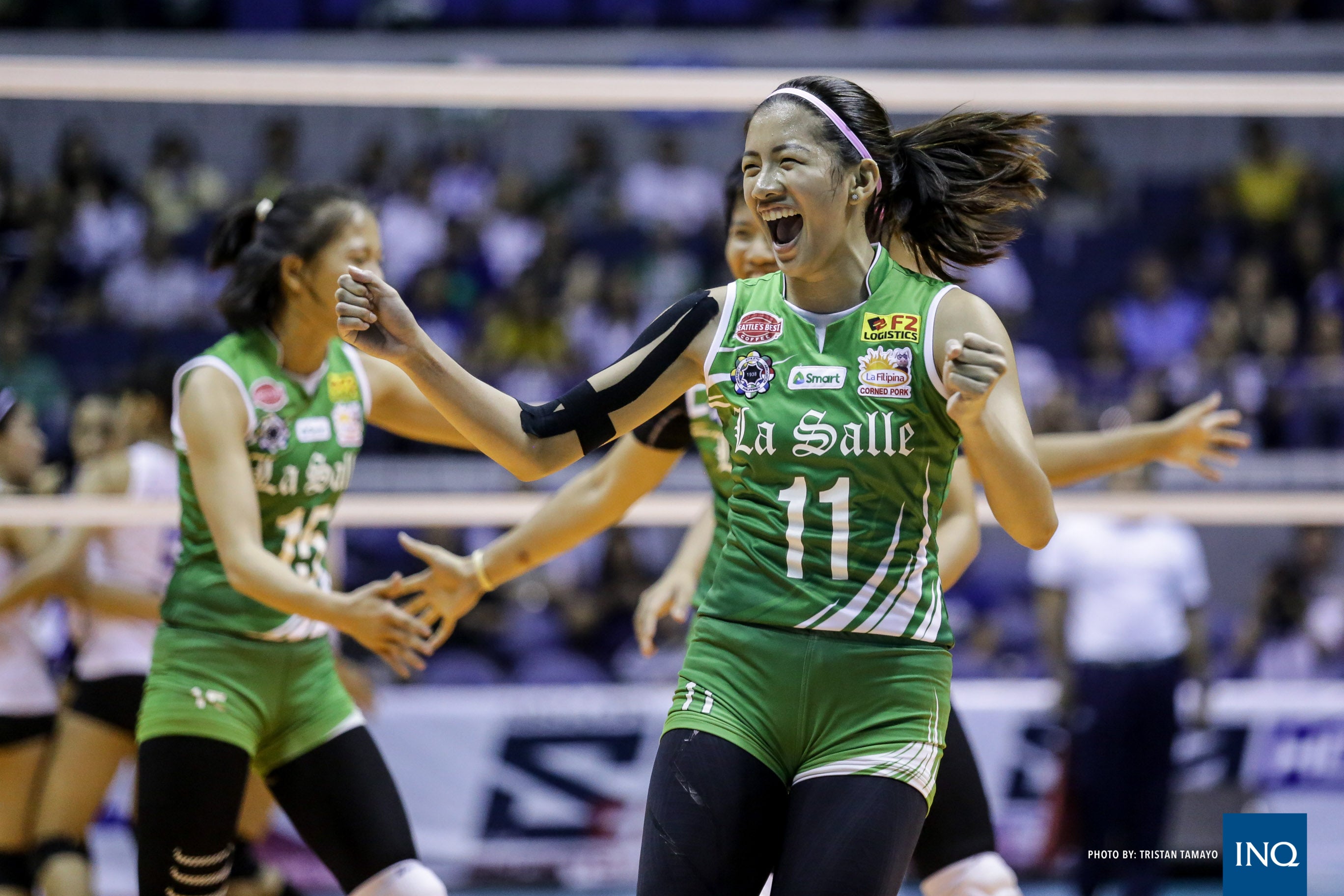 If not for La Salle’s disappointing loss to Ateneo in the final match of the eliminations, Kim Kianna Dy would’ve ranked higher than no. 4.

Still, the defending champions finished with a twice-to-beat advantage come Final Four with the Lady Spikers taking the second seed with an 11-3 record.

La Salle’s game against Ateneo was a return match for Dy who tweaked her ankle in their match UST on March 29, and the Lady Spikers’ talisman finished with 15 points and that is quite an up from her 12 points per game average this season.

Loss or not, Dy has been the undisputed opposite best hitter this tournament. 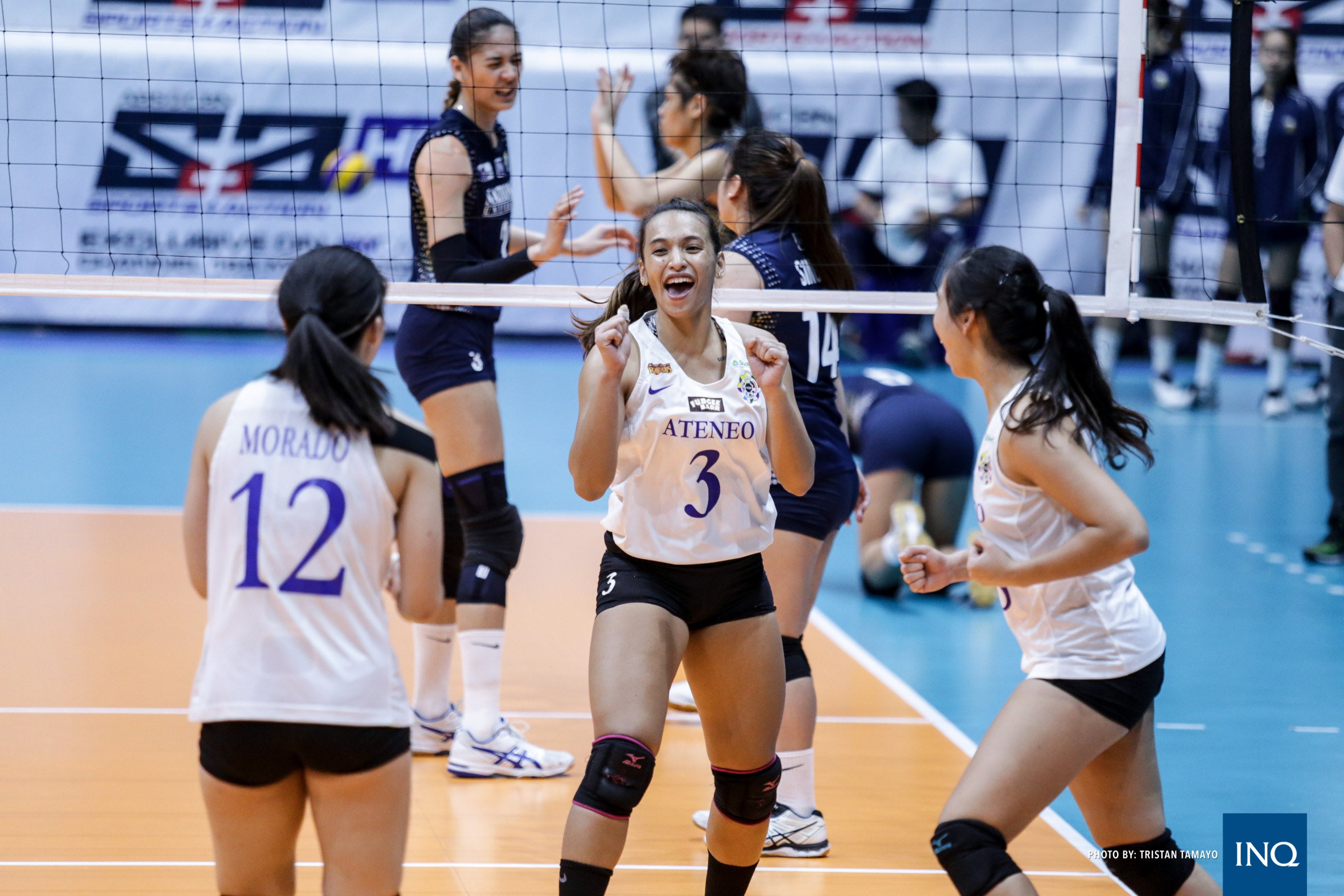 Ateneo had just one chance to take the top seed of the tournament, and without Jhoana Maraguinot the Lady Eagles had to find someone who was willing to step up for them.

Morente missed all of last season due to academic problems, but she treated Season 79 as her own personal renaissance.

In her, potentially, final Ateneo-La Salle game, Morente finished with 14 points to carry some of the scoring load Maraguinot usually carries.

Morente, though, not only took care of the scoring for Ateneo as she also recorded 15 excellent digs and 17 excellent receptions.

In comparison, Morente had more excellent receptions than La Salle libero Dawn Macandili who had 13. 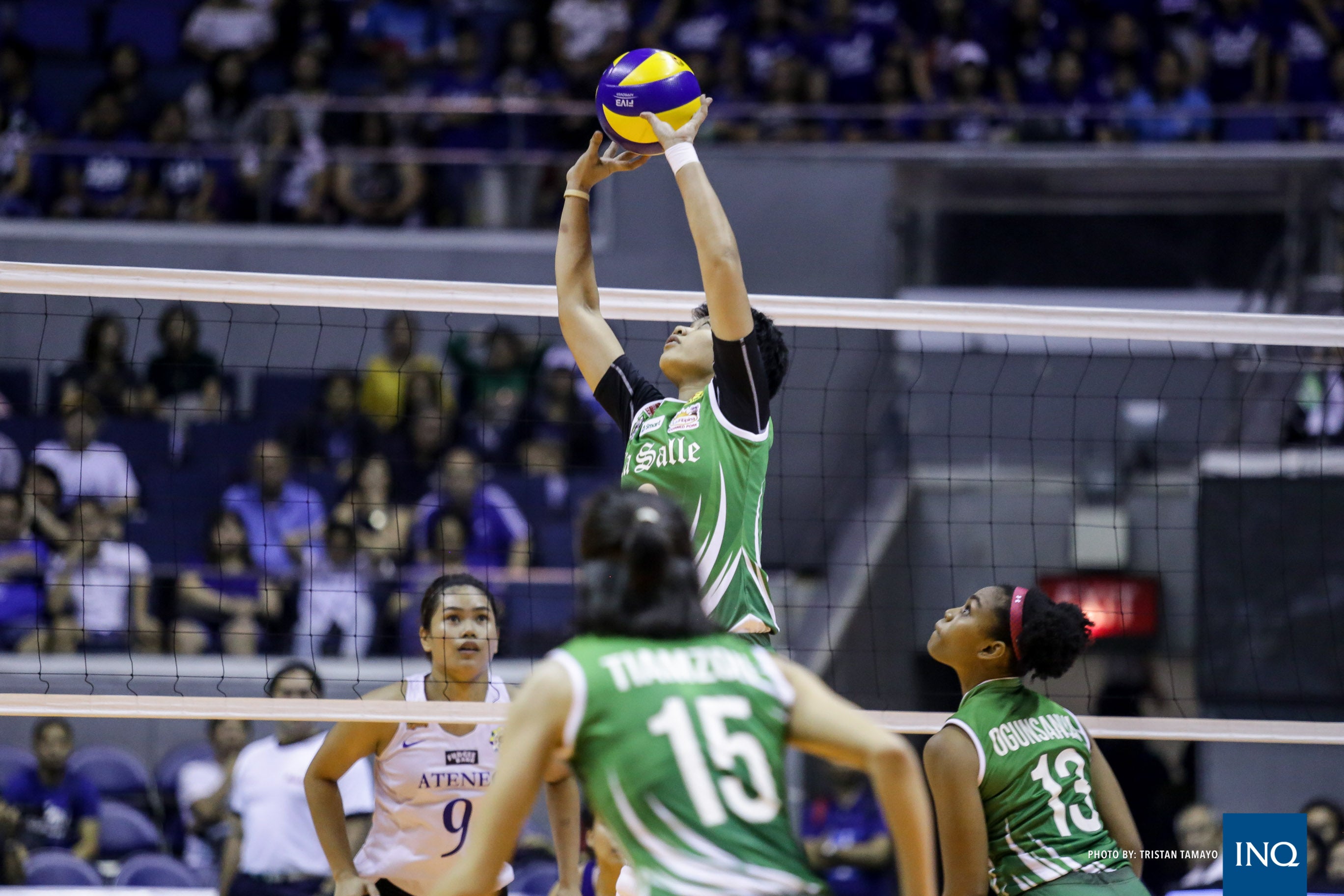 Kim Fajardo’s case in this ranking is the same as Dy’s.

A win over Ateneo would have pushed the iconic setter higher but their loss against the Lady Eagles put a damper for her case.

Fajardo did win her personal matchup against Morado as the La Salle setter outmatched the Atenean 40-34 in sets but the Lady Spikers fell short in the team category. 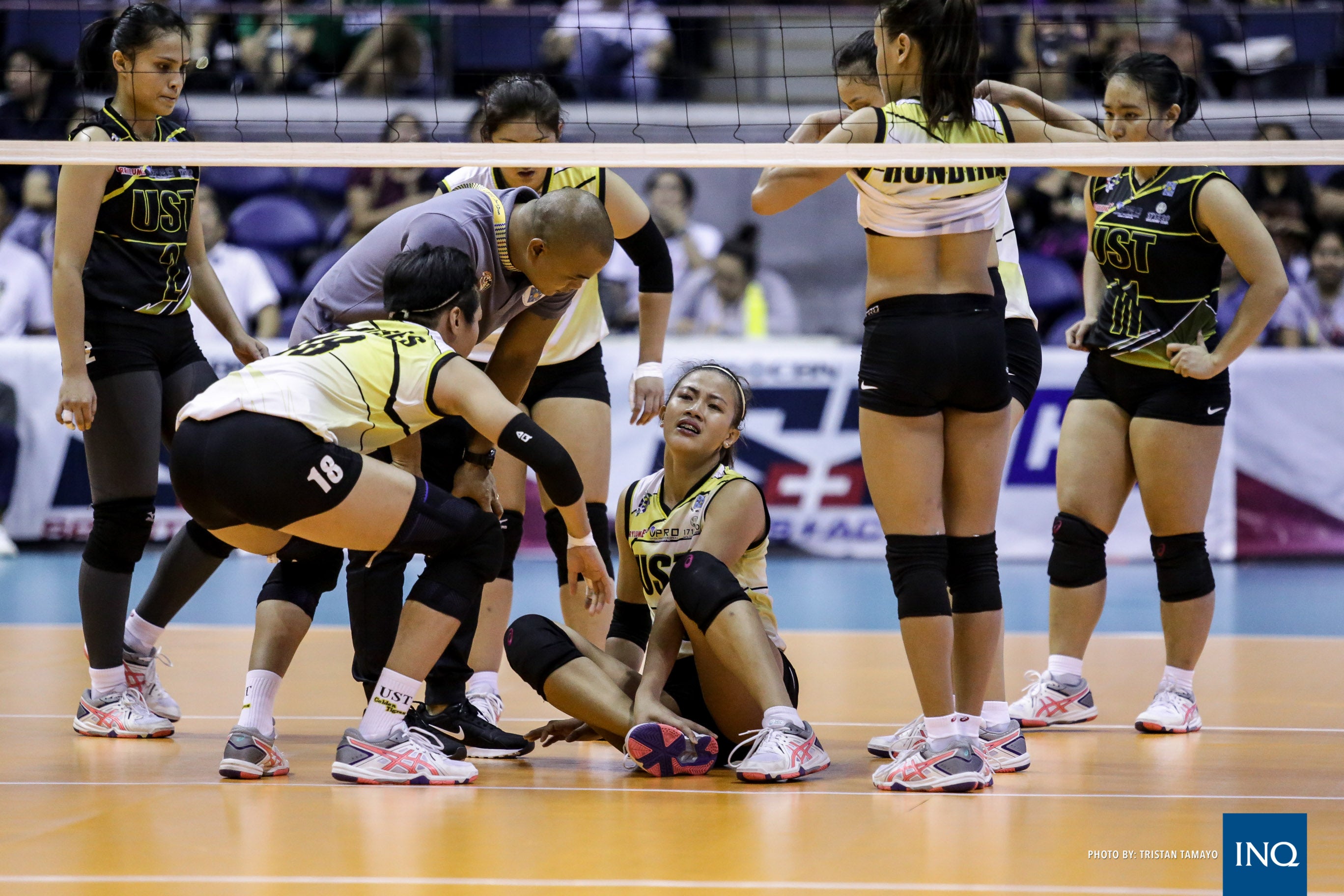 Score one more for the Golden Tigresses.

Rondina wasn’t the only one who delivered the goods for UST as hitting partner EJ Laure also had her moments.

Laure finished with 22 points against NU, in a game where if they lost would force a playoff for the fourth seed.

Her moment, though, came in the form of perseverance when she landed awkwardly on her right ankle in the final stretch of the fifth set but Laure was able to push through and finish the contest.