Insulated from the fallout from a leadership crisis hounding local tennis, young Filipino-Australians get specialized training as they vie for spots in future Philippine teams
By: June Navarro - Reporter / @junavINQ
Philippine Daily Inquirer / 01:50 AM April 23, 2017 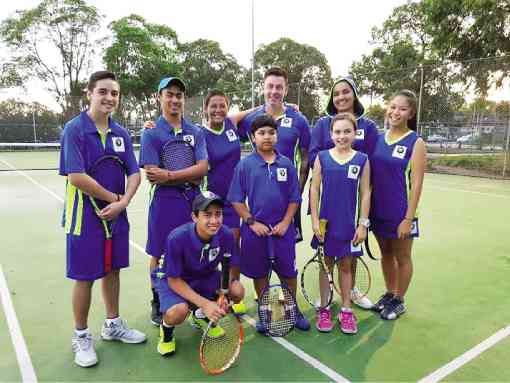 She stood out in the sea of white faces on championship day, but Frances Angelica Santiago felt completely at ease. In the last two points of the singles final, she rushed the net for a sizzling volley before hammering a forehand winner to close out her Australian foe.

Up against the tough foreign competition from the very first round, the 16-year-old from Quezon City refused to be intimidated as she won the 2016 New South Wales Age Group Championship Tennis Tournament in Australia with aplomb.

Ranked in the 600s among 6,000 junior and senior women’s players all over Australia in mid-season last year, Santiago leapfrogged to No. 300 after winning all her three tournaments in the girls’ under-16 division.

“I trained and played in Australia for three months and that helped a lot,” says Santiago, who now ranks eighth in the Philippine women’s national pool. A Grade 11 student in the pioneering senior high school batch of De La Salle University in Manila, Santiago is just one of the many young guns that the group MAC’s Crankit Tennis Academy has been trying to insulate from the raging leadership struggle on the local tennis scene.

Fadi El Soury, the chair of the tennis academy, and Filipino-Australian coach Patricia Concon-Puzon have, since 2014, been using their own money to send talented young players Down Under in an effort to produce Filipino tennis champions.

“In the long run, we want to develop world-ranked tennis players from the Philippines who can compete in the Olympics,” says El Soury, the Lebanese owner of the Fady line of tennis apparel and equipment, who now calls Manila home.

“Coach Pat”—as the players fondly call her—is a Level 3 coach from the Australian Tennis Professional Coach Association (ATPCA). A former junior netter herself, she prepares both players and coaches for the big international tournaments with the help of training modules and a curriculum she designed.

Apart from sending players to Australia, El Soury and Coach Pat have also been tapping talents with Filipino blood Down Under and bringing them, along with other youngsters of foreign descent, to the Philippines for a series of tuneup tournaments. Brothers Arden and Geoff Asilo and Angelica Nikki Okol, whose mother is Vietnamese, are just three of the promising talents from the tennis academy who, Coach Pat says, may soon play for the country.

A fan of Swiss superstar Roger Federer like his brother, the 16-year-old Arden Asilo won his first tournament in the under-16 age group in Melbourne last year and ranks No. 813 in Australia.

The academy has also brought along Australian-Indian Joshua John and Spanish-Croatian siblings Antonio Octavio and Shasha Olivia Pereda to play in an age-group tournament in General Santos City this weekend. Joining them from Manila are UAAP Rookie of the Year Andrea Nicole Amistad of Ateneo, 16-year-old Bea Gomez of Temple Hill International School in Quezon City and Regina Santiago, Angel’s older sister and former UAAP star from La Salle.

Unlike the country’s major tennis stakeholders, however, the academy serves its cause best by staying away from the dispute hounding the local sport. “We stand neutral [in the leadership crisis] because we want to get the fruits [of our program] right away,” El Soury says philosophically. “We don’t want to go against the people who plant the seeds because we really want to reach the fruits.”

The Philippine Tennis Association (Philta) is embroiled in a leadership tug-of-war between the groups of Philta president and Parañaque City Mayor Edwin Olivarez and Philta vice president Randy Villanueva.

Recently, the Philippines bowed to Thailand in a Davis Cup tie held in Bangkok after Filipino stars Treat Huey, Ruben Gonzales and Niño Alcantara backed out of the team, apparently in protest against the distasteful strife at Philta. If the problem gets completely out of hand, it could destroy the country’s medal hopes in the Southeast Asian Games, slated Aug. 19 to 30, in Kuala Lumpur. The dispute has alarmed the Philippine Olympic Committee, which has threatened to suspend Philta and form a caretaker committee to see to the needs of the national team.

“We don’t want to interfere in any kind of politics. We’re not against anyone; we’re with everyone,” says El Soury. “All we want to do is help the kid or the coach who cannot even afford to buy a proper uniform or a pair of shoes. It doesn’t matter who the kid is, as long as he shows potential and dedication. Any kid can be sponsored by MAC’s Crankit.”

Coach Pat has started a program in hopes of creating world-class tennis coaches for young talented netters. “We have great players at ages 13 to 14, but sadly these kids don’t progress to a higher level as they grow older [because of the lack of top coaches],” she says. “We want to help these kids reach their full potential.”

According to El Soury, the level of expertise of coaches in the Philippines pales to that of the coaches who learned their craft in Australia. He says the majority of mentors here are former players “who can train” but don’t have enough expertise to coach players.

“We want to teach the coaches first before reaching out to the kids,” he says. “Coach Pat has developed a program to teach coaches all over the Philippines so they can enter the ATPCA program and become certified professional coaches. We’re doing this in the Philippines almost for free.”

The local sport may be fading because of politics, he says, but the academy is doing its bit to help revive it.