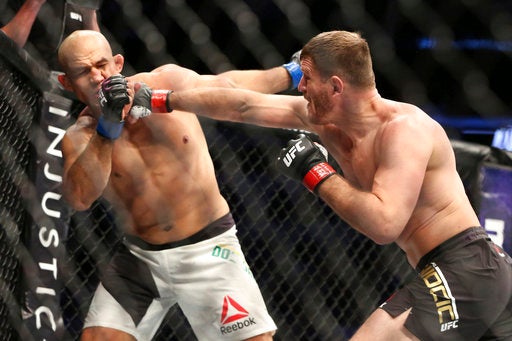 Stipe Miocic, lands a right against Junior Dos Santos in a mixed martial arts bout at UFC 211 for the UFC heavyweight championship. AP

Since the heavyweight division was formed in 1997, only Miocic, Randy Couture, Tim Sylvia, Cain Velasquez and Brock Lesnar have won two title defenses.

Miocic (17-2) avenged his loss to Dos Santos in December 2014 in Phoenix, which was a five-round match that left both fighters bloodied.

The victory was Miocic’s fifth straight since his loss to Dos Santos.