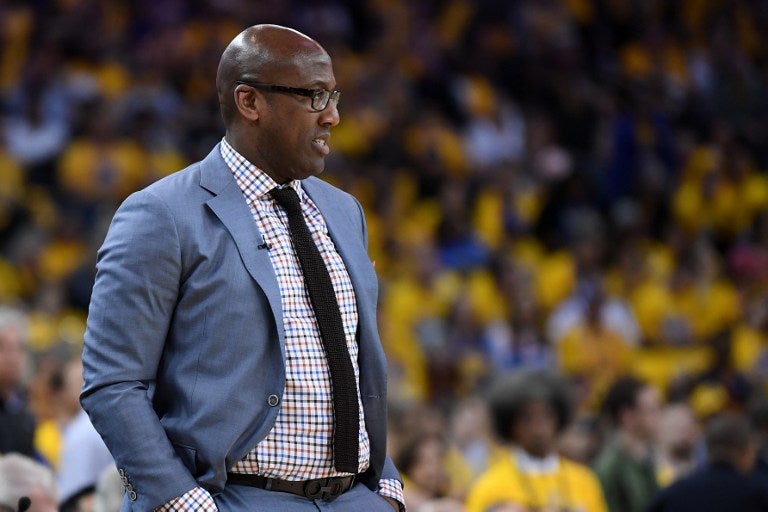 OAKLAND, CA – MAY 14: Acting head coach Mike Brown of the Golden State Warriors looks on during Game One of the NBA Western Conference Finals against the San Antonio Spurs at ORACLE Arena on May 14, 2017 in Oakland, California. NOTE TO USER: User expressly acknowledges and agrees that, by downloading and or using this photograph, User is consenting to the terms and conditions of the Getty Images License Agreement. Thearon W. Henderson/Getty Images/AFP

Golden State Warriors acting coach Mike Brown had the last laugh on Tuesday after a pre-game confrontation with traffic police who failed to recognize him as they escorted the San Antonio Spurs to Game 2.

Brown, who saw the Warriors run out 136-100 winners to take a 2-0 lead, was a late arrival for the game after being stopped by traffic police as he attempted to join the Spurs motorcade.

Brown told reporters he was pulled over after ignoring a request to stop at a red light as the Spurs coach rolled towards the Oakland Arena.

“I’m like, ‘This is great, I didn’t have to stop for any of these red lights,'” Brown said.

“So I literally start to go, and I’m going to get in the far left lane to go through where we all go through, and a cop out of nowhere pulls in front of me and goes, ‘Hey, you, stop!'” he said.

“So I’m, like, feeling myself a little bit. I’m like, ‘Hey, I’m being bullied by Oakland PD or San Francisco PD in my own building, my own parking lot.’ So I start to go a little bit, and another one pulls up: ‘Hey, you! You heard him! Stop!'”

Brown said he was rapidly surrounded by multiple police officers.

Brown then revealed that Spurs coach Gregg Popovich phoned him from the team bus to poke fun.

“So I answer the phone, and Pop is dying. He goes, ‘Mike, I didn’t know that was you… When I saw it was you, I died laughing,'” Brown revealed.

Popovich later joked about the incident before the game.

“Somebody’s got to teach him if the California Highway Patrol tells you to move, you move over,” Popovich said. “He didn’t do that. But it was funny.”