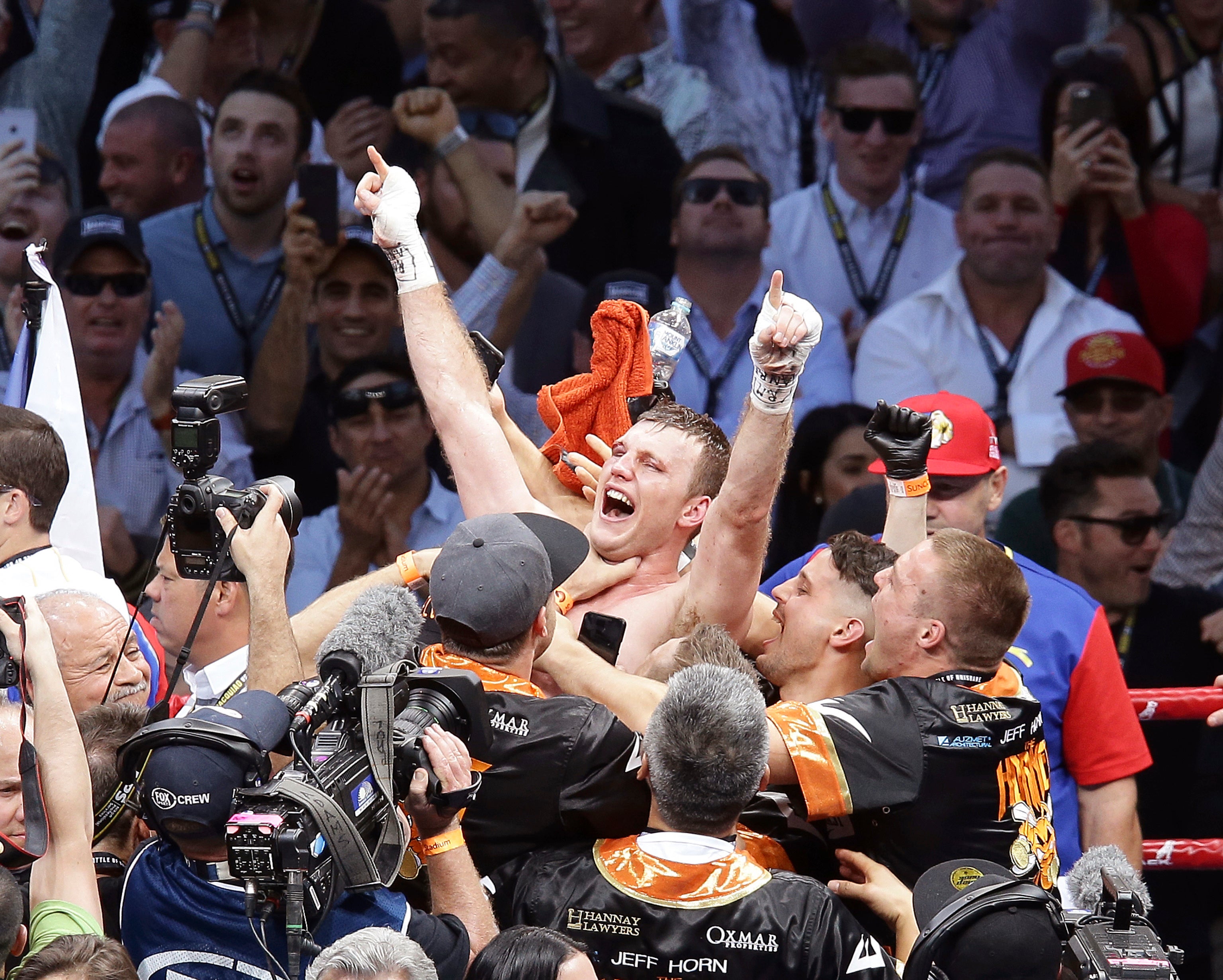 BRISBANE, Australia — Manny Pacquiao was taken to uncharted territory by Jeff Horn and did not find the way out.

Bullied and roughed up by the Australian toughie in the early rounds, Pacquiao yielded his World Boxing Organization welterweight crown by unanimous decision, 117-111, and 115-113 twice, in their “Battle of Brisbane” at Suncorp Stadium here.

Though the score did not reflect the true nature of the bloody Sunday bout, Pacquiao graciously accepted the defeat that dampened his ring career once again.

“That’s the decision of the judges, I respect that,” Pacquiao said, as he thanked his fans and countrymen for watching Australia’s biggest boxing spectacle, luring a record 51,052 people of all creed and color.

Pacquiao sustained two bloody head cuts on the left, through a head-butt, in the sixth round and on the right, through a punch, in the seventh round.

Actually, Pacquiao had Horn wobbly and on the run in the ninth, his best round, but failed to finish off the former schoolteacher who fought like a street brawler.

The fighting senator paid the price as the unbeaten Horn, who also sustained cuts and bruises, got his second wind and withstood Pacquiao’s late flurries to rise to 17-0-1 with 11 knockouts.

With the big shocker, the 38-year-old Pacquiao is forced to rethink his options. He has dropped four of his last nine bouts and is now 56-7-2 with 38 knockouts.

Still being stitched up, Pacquiao failed to appear in the postfight conference.

Horn, his once cherubic face covered with cuts, welts and bruises, did appear before reporters, along with his chief trainer Glenn Rushton.

Following Pacquiao’s lead, Horn expressed willingness to tangle again with the man from whom he snatched the crown.

“Amazing, that’s how I feel,” Horn said. “I felt lucky, throwing a lot of punches and throwing him off rhythm.”

As usual, Pacquiao opted to lean on the ropes to test Horn’s power and then smiled as if to show that he could take the punches.

But Horn, who bulked up by about 4 kg overnight after coming in at 66.7 kg in the weigh-in Saturday, won’t be deceived and continued to put the pressure on Pacquiao, who checked in at 66.2.

In the third round, Pacquiao finally got his bearing and landed some combinations to the face of the charging Horn.

Still dropping bombs, most of them duds, Horn decided to cut off Pacquiao’s path, leaving the Filipino little room to maneuver.

Horn’s aggression, however, may have won over the judges, especially in the last two rounds when he pressed on despite taking hits from Pacquiao.

In the fourth, Horn warded off Pacquiao to the canvas with a shove, and the eight-division world champion returned the favor with a push in the eighth, which saw Horn slow down and get bloodied in the nose and ears.

With the loss, Pacquiao’s bid for a rematch with Floyd Mayweather Jr. virtually fizzled.

The 11-time world champion had entered the fight as a hot favorite.

But Horn showed no signs of being overawed by the occasion, taking the fight to the Filipino great from the opening bell.

He moved forward relentlessly, not allowing Pacquiao time to find any rhythm.

“I feel like he couldn’t get a hold of my gap. I was feinting a lot, trying to upset his rhythm and I think that was working throughout the majority of that fight,” Horn said.

Pacquiao did manage to land some left jabs in the opening rounds to take the early points, but Horn refused to back away and his brawling tactics paid dividends through the middle stages.

“He was quick when he put combinations together but I felt controlling the gap made it easier to see the punches coming,” Horn said. “The size difference helped, too.”

Pacquiao, bleeding profusely from cuts high above both eyes, launched a savage counterattack in the ninth round and appeared to have Horn in trouble with some massive blows that left the Australian staggering.

“The ref came over (at the end of the round) and said, ‘Show me something or I’ll stop the fight’,” Horn said.

Horn recovered and came out strongly in the 10th. “That was just my heart that kept me going,” he said.

“He got me with a couple of good shots and I did go backwards more in that round than in any other round in the fight, but I still felt good,” he said. “But I came back in the 10th, 11th and 12th.”

Both fighters began to tire in the final stages of a contest fought at a relentless pace, but Horn’s early lead proved too much to peg back as he claimed the biggest win of his career.

Pacquiao’s longtime trainer Freddie Roach had predicted the fight would be short and sweet, but Horn — unbeaten in his 17 previous professional fights—
applied pressure by winning some of the early rounds and Pacquiao needed treatment during the sixth and seventh rounds for the head cuts.

Roach had said earlier in the week that he’d think about advising Pacquiao to retire if he lost the fight, but that would depend on how he fought.

Top Rank promoter Bob Arum said there was a clause for a rematch, but he’d give it time before talking to Pacquiao about it.

“I know Jeff would welcome the rematch, but I don’t know Manny’s future position,” Arum said. “Is he going to stay in politics and not continue in boxing? I don’t know, and he doesn’t know now — it’s unfair to ask him now.”

Pacquiao’s camp had talked about a rematch with Mayweather if he got past Horn, hoping to avenge his loss on points in the 2015 megafight. That seems to be a distant chance now. Pacquiao was defending the WBO title he won on points against Jessie Vargas last November. —With reports from AP, AFP /atm