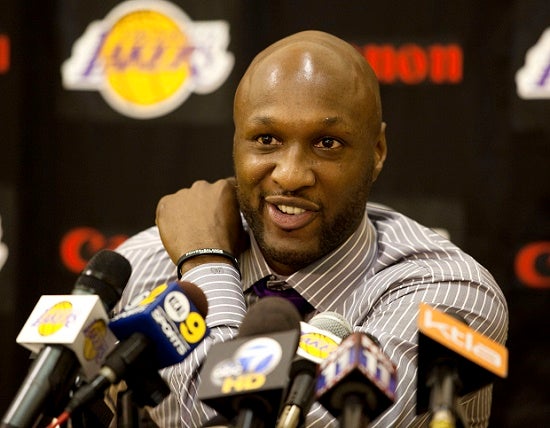 Boston Celtics legend Paul Pierce recently signed a one-day contract with the Boston Celtics and will have his jersey retired with the team at some point next season.

Former Los Angeles Lakers forward Lamar Odom seeks to do the same and retire as a member of the team he considered home the most.

Far removed from his playing days, the 37-year-old sixth NBA Man of the Year winner expressed his desire to sign a one-day ceremonial contract so he could officially retire as a member of the storied franchise.

The lanky lefty played seven seasons with the Lakers from 2004 to 2011 and was an instrumental piece in the team’s back-to-back titles in 2009 and 2010, alongside Kobe Bryant and Pau Gasol.

Odom, who faced several drug-related issues since his exit from the league, also said his departure from LA caused his downward spiral.

“That trade from the Lakers basically ended my career and purpose,” he told The Vertical. “I was never really myself ever again. Being in L.A., the structure, the people I knew, it hurt leaving.”

Now completely sober, Odom is weighing in his options, revisiting an offer from the Lakers brass to serve as a player development coach, or suite up for Ice Cube’s upstart BIG3 league next year.

“It would give me something to do,” Odom said on the possibility of joining the 3-on-3 tourney.  “That league is going to last. It’s not going anywhere, and more dudes will get down with it.”  Khristian Ibarrola /ra