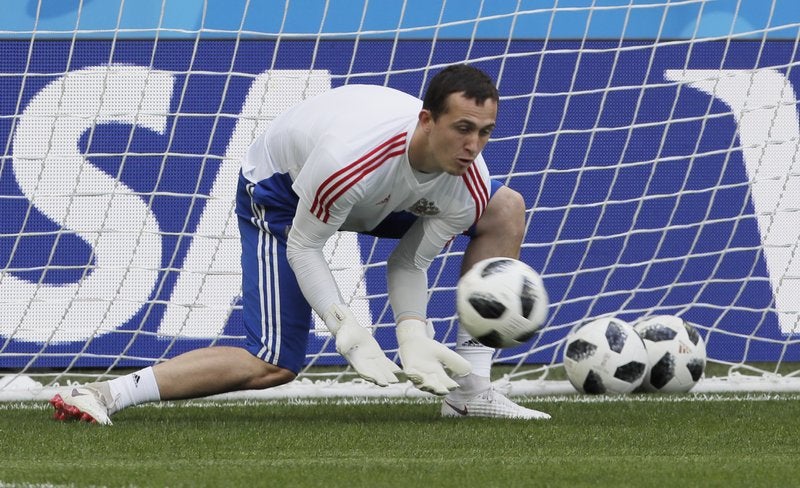 Russia goalkeeper Andrei Lunyov attends Russia’s official training on the eve of the group A match between Russia and Egypt at the 2018 soccer World Cup in the St. Petersburg stadium in St. Petersburg, Russia, Monday, June 18, 2018. (AP Photo/Dmitri Lovetsky)

MOSCOW — With or without Mohamed Salah in the lineup, Egypt should give Russia an indication if it has any shot at making a mark in this year’s World Cup.

Russia dismissed Saudi Arabia 5-0 in the opening game of the tournament, but the lopsided victory failed to show if the team is actually good enough to succeed in international competition. The Saudi team did put up much of a fight, so any questions about Russia’s readiness were left unanswered.

Either way, the Russian team understands that one victory from its next two Group A matches can put the team in the knockout round. A win over Egypt in St. Petersburg on Tuesday, coupled with an Uruguay victory over Saudi Arabia on Wednesday, would be enough for Russia to advance.

But Egypt understands it is in a must-win situation following its 1-0 loss to Uruguay. Salah, nursing a shoulder injury, did not play in the opening match. The decision not to use him could have centered on protecting him from the physical Uruguayans, but with the tournament on the line, the Liverpool striker will almost certainly play.

Salah is Egypt’s star player with 33 of the team’s 57 goals, and he scored 44 goals in 51 games for Liverpool.

“Of course he stands out, but obviously we’re not up against a single player,” Russia coach Stanislav Cherchesov said. “I believe in my players. We are ready to do this and we will do this.”

Salah hasn’t played a game since May 26 and will have fresh legs if he gets on the field against Russia.