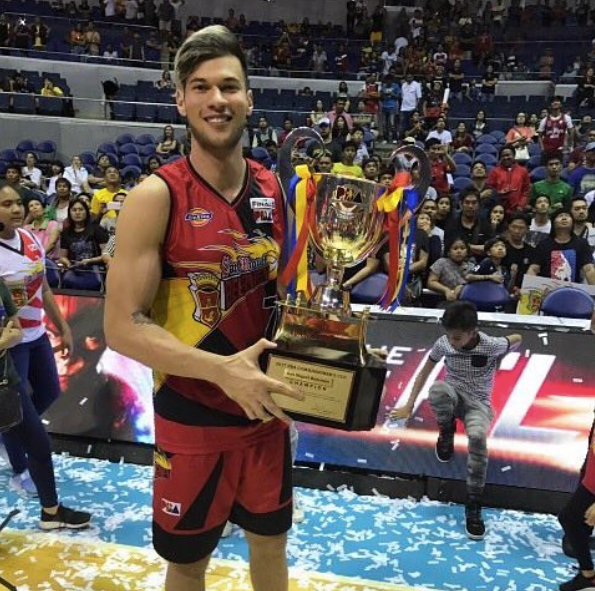 PBA player Arnold Van Opstal took a stand for equality during a question-and-answer session on Instagram.

When the GlobalPort Batang Pier cager encountered a query about his sexuality, he took the time to lay out how he felt about LGBTQ+ issues.

He qualified that he was “straight,” but believes “the whole game of labeling sexuality is a joke.”

“Preferences are preferences, love is love and everyone deserves to be their own authentic selves without having to fear the judgement of others,” he explained.

He expressed his views on homophobia in sports: “I feel like [athletes] are not doing enough to address the homophobia that is very apparent in sports due to fear of judgement set by their peers and coaches.”

“It’s 2018 there’s no space for ignorant assh*les,” he said. “Judging someone by their sexuality is as ignorant as judging people by their skin colour or religion.”

He also left with a strong message: “All homophobes and racists can go f*ck themselves.”

Online, Van Opstal won new fans for using his platform to speak up.

Movie and TV writer G3 San Diego, a trans woman, lauded his stance: “Be like Arnold Van Opstal,” she tweeted.

Vice Ganda, who is also a member of the LGBTQ community, was impressed as well.

He shared Van Opstal’s statement on his own Instagram Stories and made his own comment. “First time I encountered a Filipino athlete boldly [speak] about LGBTQ+ and homophobia. Thanks @arnoldvanopstal [Arnold Van Opstal]!”

“I hope everyone including your fellows in your sport sees this post,” he said.

Homophobia has long been a problem in sports around the world, and Fare network was organized to tackle discrimination—including homophobia and racism—in European football.

The National Basketball Association (NBA) in the United States has also taken steps to support the LGBTQ+ community. It protested a law on transgenders using bathrooms of their assigned sex at birth by moving the 2017 all-star game to New Orleans.  /ra

How the Pride flag was secretly paraded in anti-LGBTQ Russia

NBA announces 2019 All-Star game will be held in Charlotte