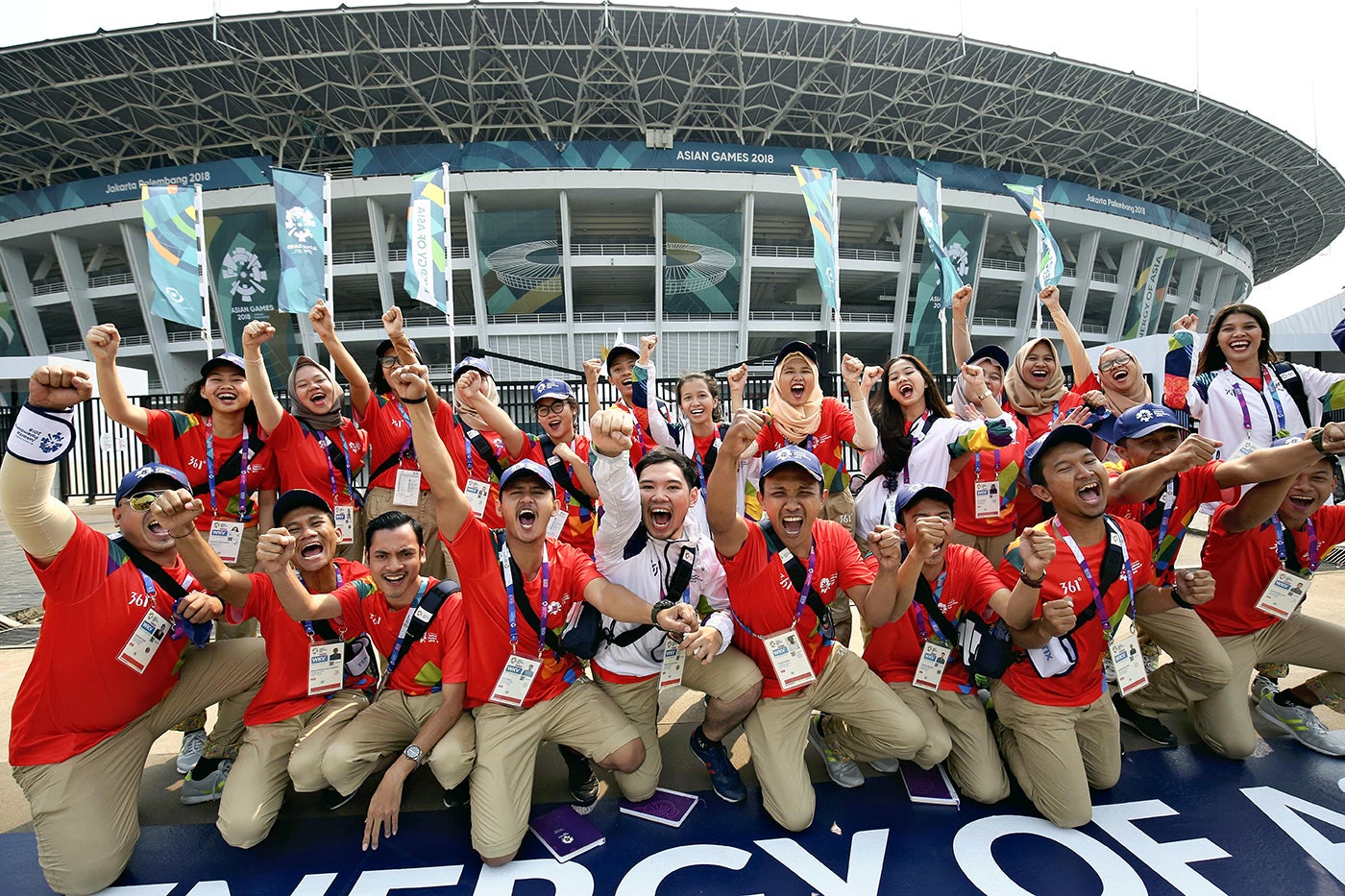 JAKARTA — Around 45 countries and regions with about 15,000 athletes and officials will participate in this 18th edition of the Asian Games, held mainly in Jakarta through Sept. 2. The first Asian Games event was held in India in 1951, and the Games have been held every four years since the second edition in 1954 in Manila. Japan has hosted the Asian Games twice, in 1958 in Tokyo and in Hiroshima in 1994.

This is Indonesia’s second time to host the Asian Games, after hosting the 1962 edition.

“I am excited to be part of the history,” said Daariin Purwanto, 19, a college student who is volunteering at the event. “I look forward to help people from other countries.”

According to the organizing committee of the Asian Games, there are about 12,000 volunteers supporting the event.

This Asian Games will include 40 sports and 465 events, from baseball, softball and sports climbing to karate — all to be included in the 2020 Tokyo Olympic Games.

According to the Japanese Olympic Committee, Japan is sending its largest delegation to the Asian Games, with 1,096 members including 762 athletes. The delegation is led by Yasuhiro Yamashita, a former judo gold medalist and a senior official of the JOC.

Yamashita has said in a statement that Japan’s participation in the Asian Games is considered an “important step toward the Tokyo Olympics and Paralympics that is only two years away.”

Japan will be competing against these two Asian powerhouses, though Yamashita has not spelled out a specific goal for its medal tally.

One medal hopeful for Japan at the Asian Games is swimming star Rikako Ikee. The 18-year-old high schooler won the women’s 100-meter butterfly at the Pan Pacific Swimming Championships held earlier this month in Tokyo.

Ikee clocked 56.08 seconds in Tokyo in her main event to set a Japan record.

“I want to win all individual events I enter [at the Asian Games],” Ikee said when leaving for Jakarta earlier this month. “If possible, I want to be chosen the Games’ MVP.”

In athletics, two speedsters will likely compete against each other for the men’s 100 meters. Aska Cambridge, 25, who won a Grand Prix series in Karlstad, Sweden, in July, will vie with Ryota Yamagata, who won the International Athletics Meeting in Liege, Belgium. Cambridge’s personal best for the event is 10.08 seconds, while Yamagata’s is 10.00.

Japan’s only sub-10 second sprinter Yoshihide Kiryu, whose best is 9.98 seconds, did not earn a slot for an individual race at the games, but he is expected to make a big contribution to the 4×100-meter relay along with Cambridge and Yamagata.

In badminton, Kento Momota is another strong medal hopeful for Japan. The lefty won the men’s singles at the world championships earlier this month, becoming the first Japanese to achieve the feat.