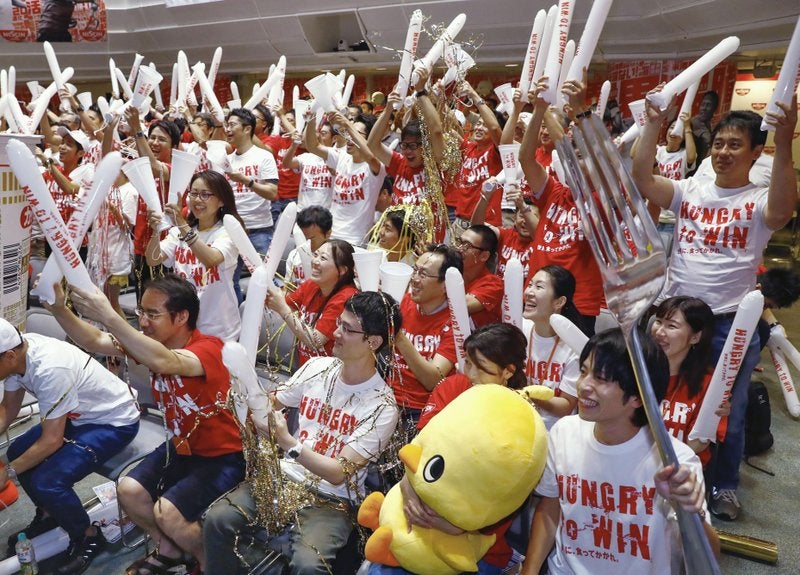 Employees of Nissin Food Products Co., celebrate after the victory of Japan’s Naomi Osaka, as they watch the live broadcast of the U.S. Open tennis women’s final between Serena Williams of the U.S. and Osaka, at the headquarters of the food company, a sponsor of Osaka, Sunday, Sept. 9, 2018. Japanese tennis and non-tennis fans alike are celebrating one of their own winning a Grand Slam tournament for the first time. (Yuki Sato/Kyodo News via AP)

TOKYO — Japanese tennis and non-tennis fans alike are celebrating one of their own winning a Grand Slam tournament for the first time.

“She just let her playing do the talking,” said Tokyo resident Noritomo Kusumoto. “And her words after the match deserve a big warm applause under the unexpected circumstances. True champion and proud of her!”

Minori Nakano, a teacher and translator from the city of Kobe in western Japan, praised 20-year-old Osaka’s after-match comments in English as “so cool and yet so Japanese”. Osaka apologized to the crowd for beating the local favorite and thanked Williams for being an inspiration.

“I don’t watch tennis, but I have been this week, and will be watching Naomi from now on,” she said.

Fellow Japanese player Kei Nishikori, who’s bid to become Japan’s first male grand slam champion was ended by Novak Djokovic in the men’s semifinals on Friday, tweeted “#proud” soon after Osaka’s victory along with a series of thumbs up and trophy emoji’s in a separate tweet.

Osaka — born in Osaka to a Japanese mother and a Haitian father and has lived in Florida since aged three — has been winning hearts in Japan with her antics both on and off the court, with her post-match interviews always fun to watch, as she does her best to answer questions in both English and her less-than-perfect, but loved by the masses, Japanese.

Barry Louie, who lives in Japan and is a friend of Osaka’s father, said her father was working as an English teacher when he met her mother.

“We used to play basketball together at Kobe University and in Osaka so I feel a close connection,” he said. “Max is so family-oriented. … Just as Naomi said after the match, he can’t bear to watch Naomi’s matches. He gets too emotional.”

Canadian fan Vince Degiorgio , who lives in Ontario with his Japanese wife, said that Osaka’s win “will be an inspiration to not only Japanese female tennis players, but all kids of mixed race people in Japan who strive to show pride in their heritage.”