Butler made his move—now it's Wolves' turn | Inquirer Sports 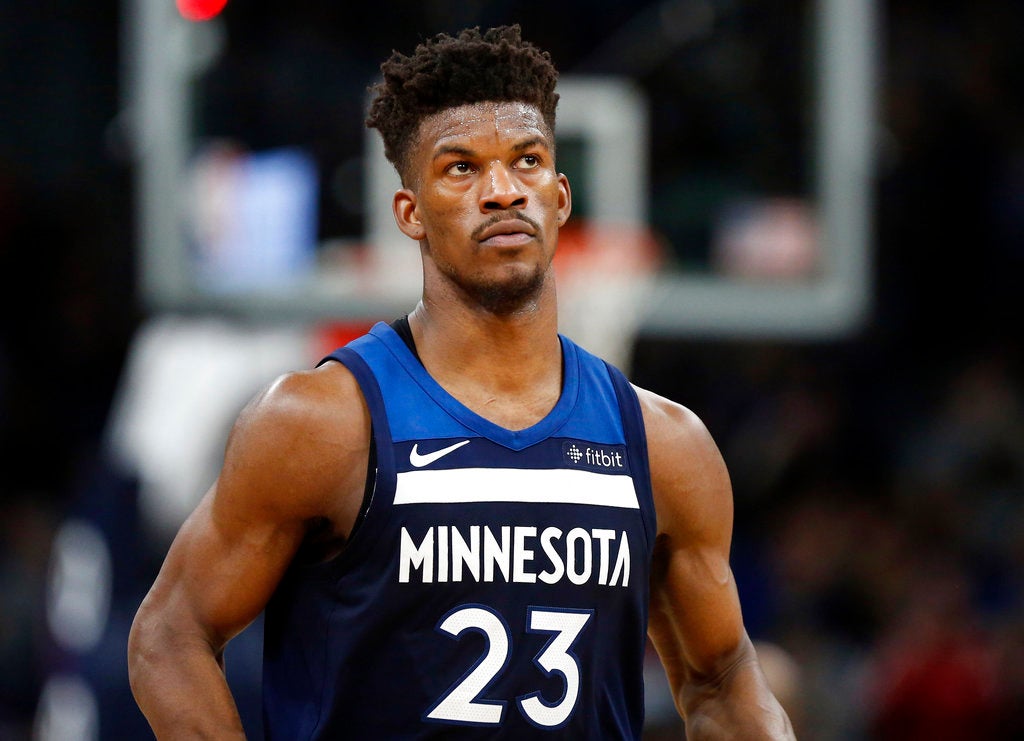 FILE – In this Feb. 11, 2018, file photo, Minnesota Timberwolves forward Jimmy Butler (23) watches in the third quarter of an NBA basketball game against the Sacramento Kings in Minneapolis. Butler isn’t the first NBA star to ask for a trade, nor will he be the last. But it’s far from guaranteed that even if he succeeds in forcing Minnesota into making a move he’ll wind up in a place he wants. (AP Photo/Andy Clayton-King, File)

MIAMI— Jimmy Butler knows that NBA players can force their way into trades.

Forcing their way into a trade that suits the player, that’s an entirely different story.

Butler has told the Minnesota Timberwolves that he has no intentions of re-signing with the club next summer, his way of saying “trade me now” or “lose me for nothing later.” The Athletic first reported Butler’s decision.

It’s a power move that players can make.

Thing is, it comes with risk — because what happens next is not up to Butler.

Leonard is in Toronto , at least for one season.

Irving got sent to Boston , and is a free agent next summer.

George landed in Oklahoma City, and probably will be there for years.

Not a whole lot of people saw those exact moves coming. But the teams did what was best for them. In all three cases, the Spurs, the Cavs and the Pacers got the best deal they could make.

It should be easy to deduce that Butler can see himself with the Clippers, New York or Brooklyn, since all of those teams will have the cap space to give him the $140 million (or $190 million) max contract he’s seeking.

Miami would interest him as well, since Butler has raved about the city in the past and he’s still very tight with fellow Marquette alum and former Chicago teammate Dwyane Wade. Toronto is believed to be on his radar. Playing alongside LeBron James with the Lakers is something that hardly anyone in the NBA would sneeze at.

A person with knowledge of the Timberwolves’ situation said that Minnesota has been talking to multiple teams, gauging the Butler market. The person spoke to The Associated Press Thursday on condition of anonymity because talks are ongoing. The Timberwolves aren’t exactly in a position of strength, since now everyone knows that Butler wants out and training camps start in a few days. But that doesn’t mean Minnesota doesn’t control how this will play out.

When Leonard asked for his trade, the Spurs had the luxury of time and wound up getting a very good deal from Toronto. The Cavs and the Pacers also had plenty of time to work out something to their likings when moving Irving and George.

Minnesota doesn’t have that same cushion. That’ll eventually lead to Butler being asked why he waited until the final days of the offseason to inform the team of his unhappiness, because not only did he potentially limit Minnesota’s options but he could have limited his own.

“You should always try to get a perennial All-Star,” former NBA forward Caron Butler told TMZ Sports, adding that he thinks Jimmy Butler is “a real winner.”

The Timberwolves can basically make any of the following decisions:

— Move Butler right away and start camp without distraction;

— Hang onto him for a while and see if he changes his mind;

— Work out a sign-and-trade;

— Make him play out the year.

Butler was their leading scorer last season. He’s an All-Star. He helped them end a 14-year playoff drought. Losing him, no matter what they get back, wouldn’t seem to help the Wolves’ chances of returning to the playoffs in a still-loaded Western Conference.

Sometimes, even irreconcilable differences work out.

Houston won NBA championships in 1994 and 1995, led by Hakeem Olajuwon. People forget that in 1992, he demanded a trade in a very ugly situation sparked by the Rockets thinking that he was faking a hamstring injury. They mended fences and won titles.

Most of the time, though, when a player wants out, they get out.

Dwight Howard demanded to be traded by Orlando in 2012, and got his way. Shaquille O’Neal wanted to leave the Lakers in 2004, got sent to the Heat, and then eventually forced them to send him to Phoenix. Chris Paul and Chris Webber have forced trades, too. And it’s not a new thing — Wilt Chamberlain and Kareem Abdul-Jabbar wanted trades and got them.

Butler got his trade ball rolling.

Where it goes, at least this season, that’s up to Wolves coach and president Tom Thibodeau — whose own future in Minnesota might be hanging by a thread as well right now — more than anyone else.