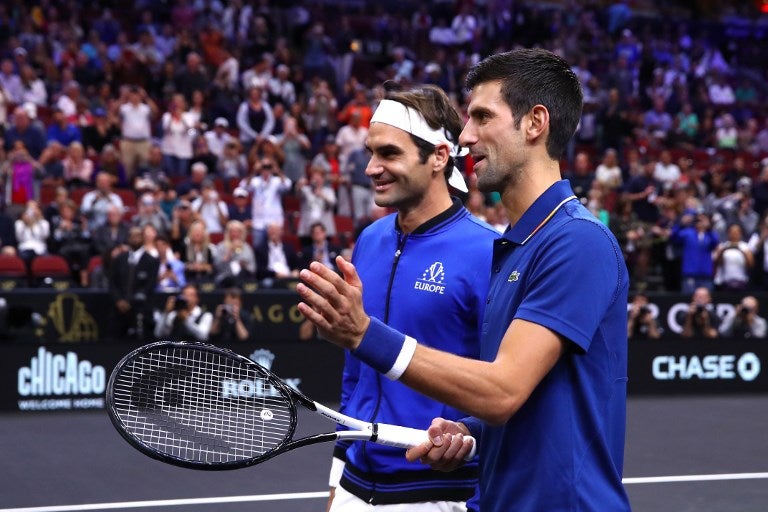 Team Europe Roger Federer of Switzerland and Team Europe Novak Djokovic of Serbia talk prior to their Men’s Doubles match against Team World Kevin Anderson of South Africa and Team World Jack Sock of the United States on day one of the 2018 Laver Cup at the United Center on September 21, 2018 in Chicago, Illinois. Clive Brunskill/Getty Images for The Laver Cup/AFP

World number two Roger Federer says he is mulling a return to the European clay-court season in 2019 following a two-year absence.

Federer, speaking to ESPN on the sidelines of this weekend’s Laver Cup, has skipped the clay-court segment of the season since 2017 in order to conserve energy for Wimbledon and hard-court seasons.

However, the 37-year-old revealed he is rethinking his scheduling for next season, and may yet play on clay.

“The clay-court season is under review,” Federer told ESPN. “It’s not off the table. I will know by the end of the year.”

Three ATP Masters events are held on clay as well as several smaller tournaments in the build up to the French Open.

Federer said if he does opt to play the clay-court season it will require a significant tweak of his training regime.

“I would like to make up my mind ahead of time so I can plan my buildup, my fitness schedule, even the way I would approach my December practice sessions,” Federer said. “It could benefit the clay-court season.

“This is something that is obviously a big deal. If you play the clay, it changes everything.”

Federer has won a record 20 Grand Slam singles titles but clay has been his least favorite surface. His haul of Grand Slam titles includes only one victory at Roland Garros, in 2009, when he completed his career Grand Slam.

He last reached the French Open final in 2011, when he was beaten in four sets by Rafael Nadal.