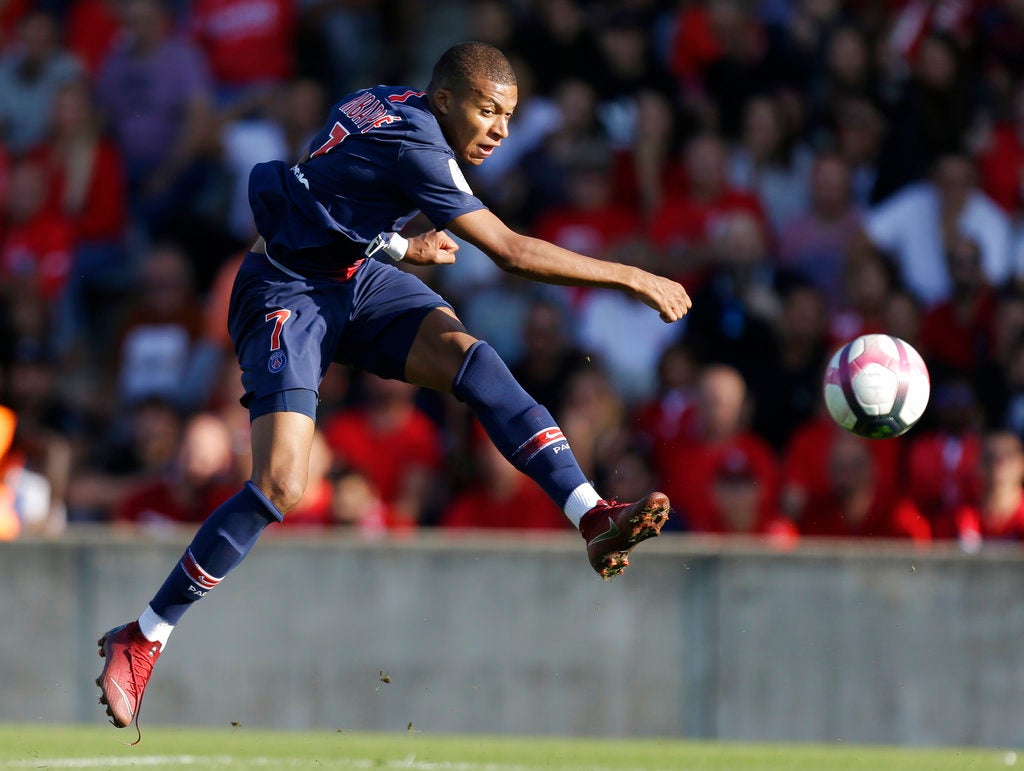 FILE – In this Sept. 1, 2018 fie photo, PSG’s Kylian Mbappe kicks the ball during the League One soccer match between Nimes and Paris Saint-Germain at Jean-Bouin stadium in Nimes, southern France. The spotlight will be on Kylian Mbappe when Paris Saint-Germain plays at Nice on Saturday Sept. 29, 2018, as the 19-year-old France star returns from a three-game suspension with questions being raised about his attitude. (AP Photo/Claude Paris, File)

PARIS — The spotlight will be on Kylian Mbappe for different reasons this weekend.

Not for his silky skills, his searing speed, or his ruthless finishing, but for his behavior.

The 19-year-old Paris Saint-Germain forward will return from a three-game suspension on Saturday at Nice with questions being asked about his attitude.

It all started at the World Cup.

Mbappe helped France win the title by scoring four goals and displaying breathtaking individual performances , but he also drew attention for his antics during the latter stages. Late in games against Uruguay and Belgium he was time-wasting, play-acting, provoking opponents and talking back to referees.

“At Paris I’ve rarely seen him time-waste like he did against us at the end of the game,” Belgium defender Thomas Meunier, his PSG teammate, said after the Belgians lost to France in the World Cup semifinals.

Irritated by what he had seen, Meunier said the teen striker’s behavior was not worthy of a future great.

“If players like (Zinedine) Zidane and Ronaldo became legends, it’s because they played with pride and desire on the pitch,” Meunier said at the time. “Their goal wasn’t to play-act or things like that.”

France coach Didier Deschamps also shouted at Mbappe to stop complaining to the referee after he was given a yellow card for dropping to the ground and simulating an injury late in the quarterfinal match against Uruguay.

The World Cup raised Mbappe’s profile to such an extent he is considered a natural successor to Lionel Messi and Cristiano Ronaldo — the world’s two best forwards — and at PSG he is pushing Neymar close for star billing.

During Paris Fashion Week on Thursday, a model wore a shirt with Mbappe’s name and face printed on it for designer Manish Arora’s ready-to-wear collection.

Articulate, bright, cultured, young and athletically gifted, Mbappe is a marketing dream and has a worldwide appeal far beyond soccer. But while his meteoric rise continues unabated, his petulance is developing alongside it.

The reason for his three-game ban was a red card — the second of his PSG career — followed by even more needless comments.

He was sent off during injury time on Sept. 1 in a 4-2 win at Nimes, having earlier scored his fourth league goal in only three games.

Mbappe reacted wildly to a challenge from behind, shoved his opponent angrily to the ground and was then restrained by teammates. He received a straight red, though he was also booked in the first half for kicking the ball away when a free kick he disagreed with was given to Nimes.

But it was Mbappe’s post-match comments which could potentially cause PSG problems, notably in big Champions League games.

Asked if he regretted his dismissal Mbappe said he did not, remarkably adding he would do the same again.

It was a brazen comment which he tried to justify, saying: “I can’t tolerate this kind of (foul), which has nothing to do on a soccer field.”

Reacting this way in a Champions League semifinal match against Barcelona or Real Madrid might suit Mbappe’s notion of sporting justice, but it would severely hamper his teammates playing with 10 men. Hardly the best advert for a team player.

Also, Mbappe’s comments about unfairness are somewhat at odds with his own play-acting during the World Cup. Cynical challenges from behind are something Mbappe is right to complain about, but shouldn’t he also eradicate his own play-acting?

PSG coach Thomas Tuchel’s immediate priority should be to calm Mbappe down and get him to see the big picture.

What has happened to one of the most entertaining sides in Europe?

Monaco won the French league and reached the Champions League semifinals in 2017, scoring more than 150 goals. But this season’s laborious Monaco team is in 18th place and coach Leonardo Jardim seems to have lost his touch.

A loss at sixth-place Saint-Etienne on Friday will crank up the pressure on Jardim, who last year was considered among Europe’s best.