VAR in spotlight again, this time for not working in France | Inquirer Sports
Close
menu
search

VAR in spotlight again, this time for not working in France 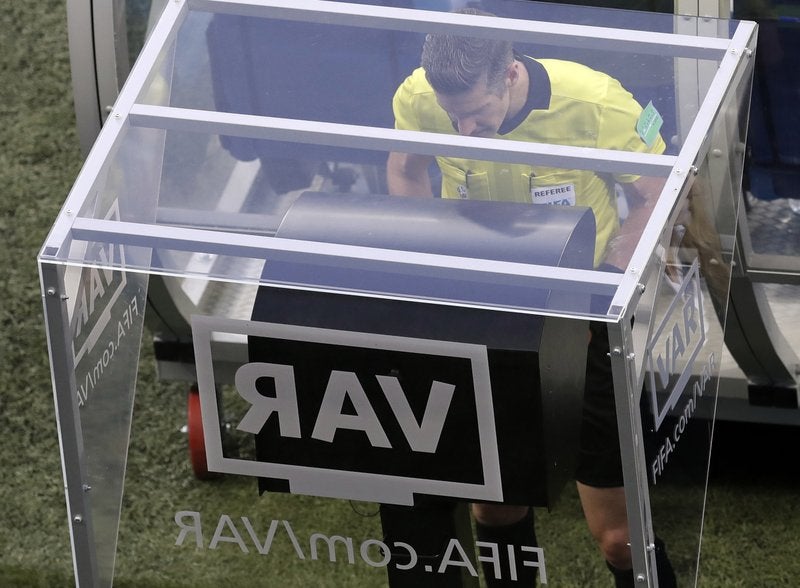 FILE – In this Friday, June 22, 2018 file photo, referee Matt Conger from New Zealand watches the Video Assistant Referee system, known as VAR during the group D match between Nigeria and Iceland at the 2018 soccer World Cup in the Volgograd Arena in Volgograd, Russia. The video assistant referee system has been much talked about since being used at the World Cup earlier this year, and on Sunday Sept. 30, 2018, VAR stopped working during the 1-1 draw between Rennes and Toulouse. (AP Photo/Themba Hadebe, File)

PARIS — The video assistant referee system has been much talked about since being used at the World Cup earlier this year — praised by some for spotting fouls, criticized by others for slowing down matches.

On Sunday, VAR attracted attention for another reason altogether: it stopped working during the 1-1 draw between Rennes and Toulouse.

“The fourth official came to see me 10 minutes from the end of halftime to tell me it wasn’t working,” Toulouse coach Alain Casanova said. “There was a problem, quite simply.”

Casanova said he and his Rennes counterpart, Sabri Lamouchi, as well as the two team captains, were all informed before the second half started.

Toulouse may have cause for regret because VAR was not used to review images when a penalty was given to Rennes midway through the second half. It was awarded after striker M’Baye Niang fell under a challenge from Jean-Clair Todibo, who was shown a yellow card for protesting the decision.

Niang converted in the 70th minute, but Todibo headed in the equalizer two minutes from time for Toulouse.

Toulouse played with 10 men for the entire second half after forward Aaron Leya Iseka was sent off in the 43rd for a second yellow card.

The draw leaves Rennes struggling in 16th place — two spots above the relegation zone — while Toulouse is seventh.

Lille showed it means business as a contender for Champions League qualification, beating Marseille 3-0 to move into second place behind Paris Saint-Germain.

Striker Nicolas Pepe opened the scoring from the penalty spot midway through the second half and then earned another penalty. He let strike partner Jonathan Bamba take it, making it 2-0 in the 86th.

Moments later, Bamba added his second of the night from close range.

Lille struggled so much last season it was almost relegated.

What a turnaround it has been since coach Christophe Galtier took charge. Not only did he save Lille from humiliating relegation following a significant transfer outlay, he has transformed the side this season.

Defender Ambroise Oyongo put Montpellier ahead and striker Andy Delort made it 2-0 after nine minutes of first-half injury time. A metal gate gave way after Montpellier fans celebrated Oyongo’s goal, sending a few of them spilling onto the pitch and causing the match to be delayed.

The outstanding Florent Mollet set up striker Gaetan Laborde for a diving header in the 79th, after which a crowd disturbance caused the match to be stopped for about 30 minutes.

Some 70-80 riot police came onto the pitch to block a section of agitated Montpellier fans from confronting their Nimes counterparts.