Staley guides US to another gold using calm demeanor 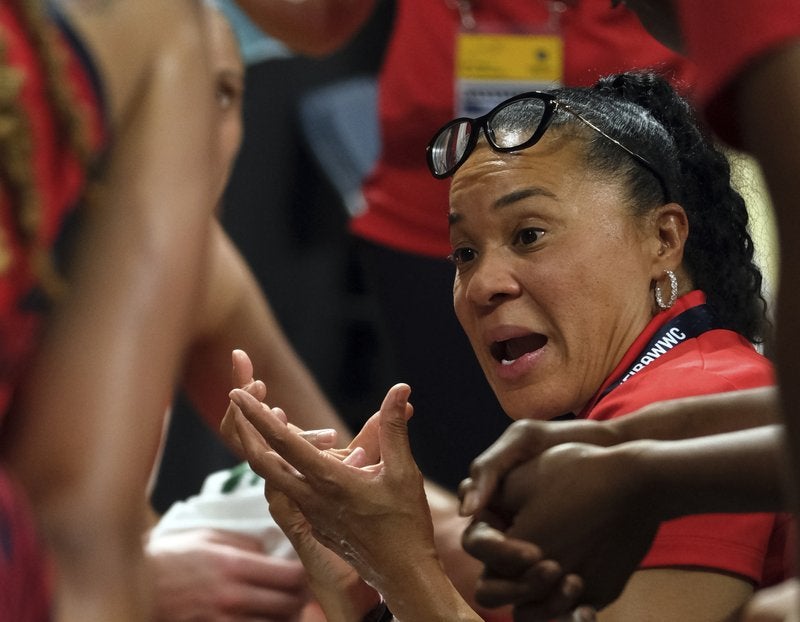 She experienced it first as a player with the U.S., then as an assistant and now as the team’s head coach. She’s been successful in each position, helping the Americans win gold.

“Dawn’s demeanor is so calm and confident I think that helped us,” said four-time World Cup gold medalist Sue Bird after the U.S. beat Australia to win a third straight World Cup title. “I think that helped us. … Dawn, the entire time, was saying you know what, we’re worried about guarding them, but they had to worry about guarding us, too. It put it into a nice perspective and allowed us to be calm and that’s what we needed.”

Staley helped guide the U.S. to an unprecedented third straight World Cup gold medal on Sunday night with the 73-56 win.

“It’s USA Basketball, if you’re part of it more times than not you’re going to win especially with players like Sue, Diana (Taurasi) and Stewie coming back,” Staley said.

Even with the collection of stars assembled on the U.S. roster, Staley knows it’s not as simple as showing up. The World Cup is a grueling tournament with six games in nine days. The Americans will always get everyone else’s best shot.

“No matter how many times you’ve been a part of it, the pressure is still there,” she said. “When you look in the players’ eyes. I knew Diana when we hit the semifinals, she took on a whole different look. When your best players gave that look you get out of the way. As the game progresses the pressure releases itself.”

Staley inherited a team that had won two straight World titles and 16 consecutive games in the tournament. The U.S. had gone 94-1 since the 1996 Olympics in major international competitions. She had been part of many of those wins as a player. Now’s she kept the unbelievable run going as a coach.

“The expectation is whenever It’s your first time, it’s way different from being a player to coaching,” said Geno Auriemma, who coached the U.S. to the previous two world titles. “Winning that first gold medal, I don’t care who you are, it’s hard. There’s no escaping that. She’s done a great job of staying with the system and staying level-headed.”

Next up for Staley and the U.S. will be the 2020 Tokyo Olympics. While the pressure will be the same, winning another gold will be a bit easier in a way, as the final three rounds aren’t played on three straight days like they are at the World Cup.

“It’s always the hardest one to win,” Taurasi said. “Physically tough, mentally tough. Playing three games in three nights you don’t do that anymore in the pros. It’s the only tournament that challenges you in that way.”

Taurasi credited the way Staley played when they both were on the U.S. team in the early 2000s for helping set a tone that she’s continued with Bird on the present team.

“She did it in such a way that Sue and I said that’s how you become a pro and win a gold medal,” Taurasi said. “That comes from Dawn and what she put into this team a long time ago.”