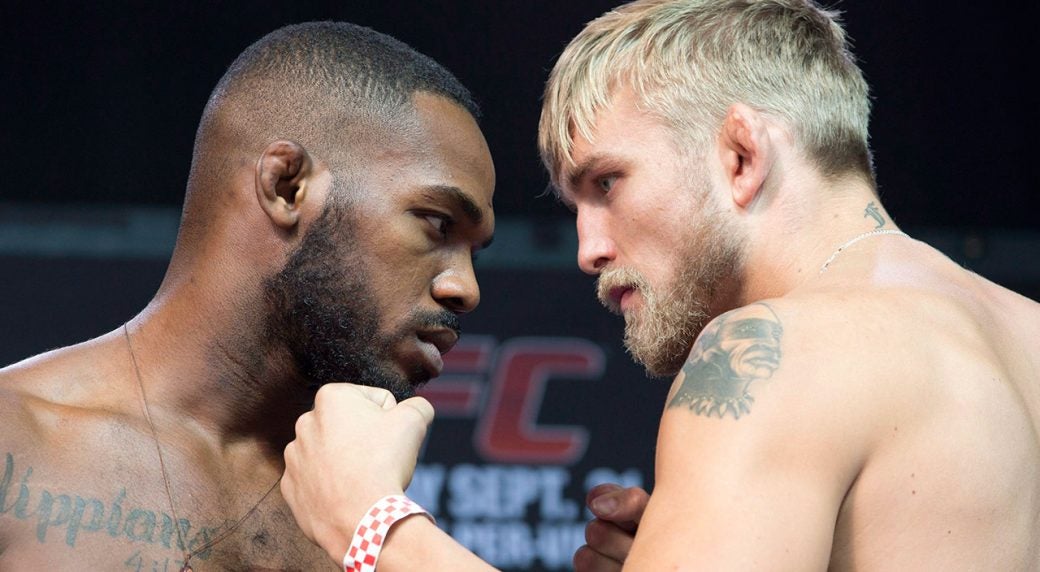 FILE PHOTO – Jon Jones, left, and Alex Gustaffson face off during the official weigh-in for their first fight in 2013. The two figure in a rematch set on December 29, 2018. AP

LAS VEGAS — Former UFC light heavyweight champion Jon Jones will attempt to regain his belt when he returns from suspension Dec. 29 in a rematch with Alex Gustafsson.

The UFC announced the main event for its traditional year-ending show in Las Vegas on Friday.

Jones (22-1) is widely considered the greatest talent in mixed martial arts, but he has repeatedly sabotaged his own career with mistakes outside the cage.

Jones hasn’t fought since July 29, 2017, when he beat Daniel Cormier to win the light heavyweight title for the second time. Jones’ victory was overturned when he tested positive for steroid use and received a 15-month suspension.

Jones beat Gustafsson in their first bout in September 2013, escaping with a debatable decision in the toughest fight of his professional career.

Read Next
What if they had an Olympics, but no one would host?
EDITORS' PICK
Get 80% OFF Ignite 2020 Cyber Tickets starting 28 September
House to probe Facebook takedown of gov’t accounts
Feud is over: Velasco next Speaker on Oct. 14
Despite toll, never too late to fight pandemic—WHO chief
Smart poised to turn PH into ‘Smart 5G country’ with nationwide rollout
Water remains our saving grace right now
MOST READ
Velasco to take over as Speaker on Oct. 14
Gun attack in PMA: Air Force man killed, 2 others wounded
Duterte meets with Cayetano, Velasco amid speakership issue
2 PDP-Laban allies in House jump over to Lakas-CMD
Don't miss out on the latest news and information.