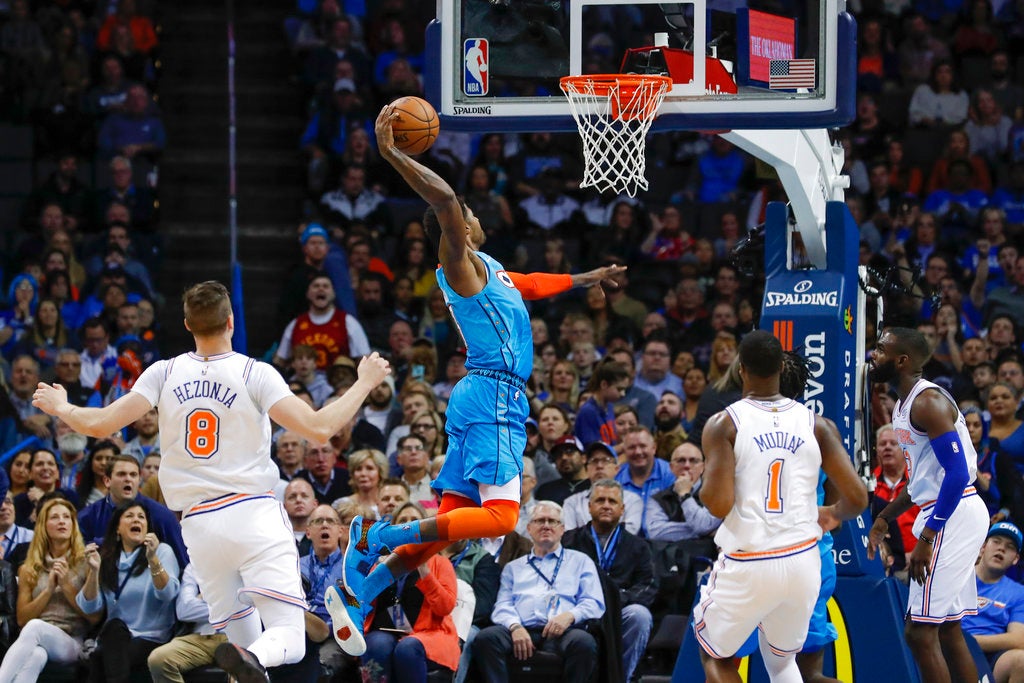 Oklahoma City Thunder forward Paul George (13) goes up to dunk against the New York Knicks during the first half of an NBA basketball game in Oklahoma City, Wednesday, Nov. 14, 2018. (AP Photo/Alonzo Adams)

“My body has just been feeling good,” he said. “I’ve kind of played myself into good shape from a body standpoint. If I can just find open looks like that, I feel comfortable taking them.”

Knicks coach David Fizdale has seen this from George before. Fizdale was an assistant coach for Miami when George was with the Indiana Pacers, one of the top roadblocks to the Heat’s championship runs.

“There was just times where we were under his shirt and he was just letting that thing go from deep,” Fizdale said. “We tried to trap him some. … I felt that pain from him when I’ve had my best teams. This guy’s a big-time player. When he gets it going like that, he’s tough.”

Steven Adams had 19 points and seven rebounds, and Dennis Schroder added 15 points and 12 assists for the Thunder. They have won nine of 10 since an 0-4 start, and improved to 4-1 since point guard Russell Westbrook was sidelined with a sprained left ankle. The Thunder matched their second-best scoring output of the season and posted their largest victory margin.

George scored 18 points in the first half and Adams added 15 to help the Thunder take a 65-49 lead. Oklahoma City shot 56.5 percent from the field before the break.

Fizdale said it was a learning experience for his young squad.

“We have a microcosm of how I’d like our guys to play,” Fizdale said. “Fast, athletic, disruptive.”

Knicks: Kanter, who played for the Thunder for two seasons and part of another, got a warm reception from the fans when he checked in as a reserve. … Rookie F Kevin Knox scored 15 points on 5-of-16 shooting.

Adams and Kanter were best friends in Oklahoma City. They talked trash throughout the game, with Adams even suggesting Fizdale should take Kanter out.

Adams said he said it because he respects Kanter.

“Yeah, I was trying to discourage him because he’s a bloody good player,” Adams said. “It’s best to have him off the floor for us.”

Schroder has been a star in Westbrook’s absence, averaging 19.2 points and 5.8 assists.

Thunder: At Phoenix on Saturday night.

Read Next
Celtics returns home from roadtrip with rout of Bulls
EDITORS' PICK
Villar Group gears up for AllValue Shopping Party on Dec. 3; around P 1-million promos and discounts up for grabs
A delightful blessing!
Legarda: Ending Violence Against Women, a cause for all
Gov’t eyeing COVID-19 vaccine booster for essential workers, indigents by Dec. 10
Omicron poses ‘very high’ global risk, countries must prepare–WHO
PH logs 665 new COVID-19 cases, lowest since July 2020
MOST READ
Quiboloy warns of ‘much worse than Omicron virus’ if his ‘persecution’ is not stopped
Bongbong Marcos’ conviction in tax case not a crime involving moral turpitude — lawyer
Omicron poses ‘very high’ global risk, countries must prepare–WHO
Marcoleta defends pol ads on ABS-CBN
Don't miss out on the latest news and information.