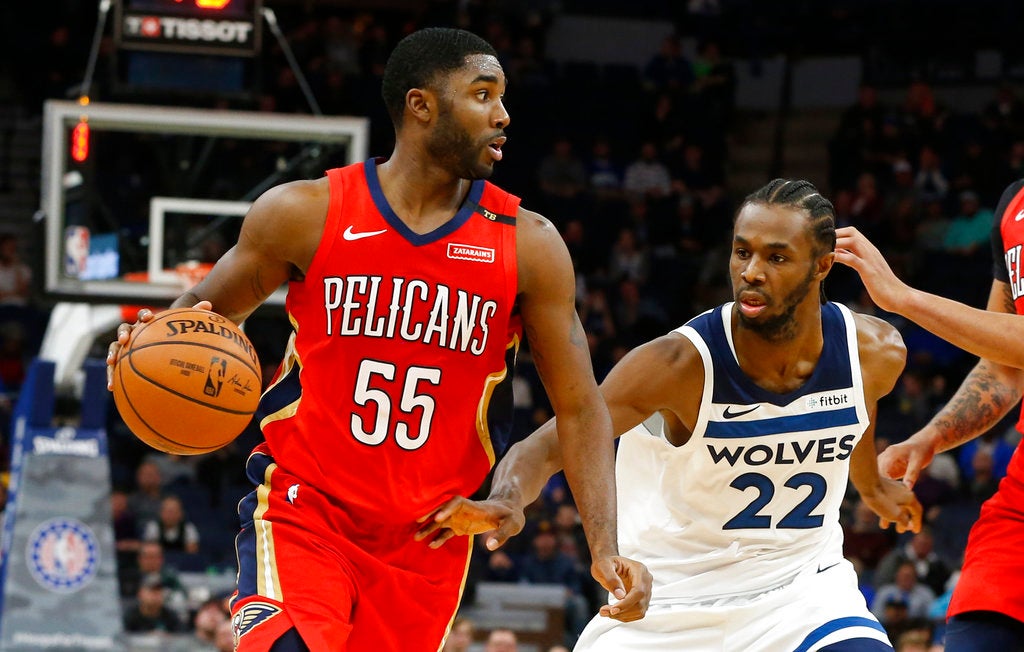 MINNEAPOLIS  — Karl-Anthony Towns and Andrew Wiggins are the main men in Minnesota again, and on Wednesday night they gave the Timberwolves exactly what they needed for a big win.

Towns had 25 points and 16 rebounds, Wiggins scored 23 and Minnesota improved to 2-0 since trading Jimmy Butler with a 107-100 victory over the New Orleans Pelicans.

Jeff Teague added 14 points and 14 assists for the Timberwolves, who shipped their disgruntled star to Philadelphia this week.

The Wolves had acquired Butler in part to take some pressure off Towns and Wiggins, the talented but young faces of the franchise. Butler was a take-charge player, often dominating the ball in the fourth quarter, perhaps to the detriment of the growth of Towns and Wiggins.

Now that Butler is gone after one-plus season, the Timberwolves have to find a new way to play. For two nights, at least, they seem to have figured out a formula for success.

“We were just playing together,” Towns said. “We did a great job getting the ball around, getting everyone involved. It was just about having fun and playing with love and enthusiasm.”

Wiggins, who helped put the game away with an electrifying dunk in the final two minutes, acknowledged Butler’s contributions, but also seemed to accept the higher expectations as the Wolves move forward without him.

“Whoever’s on the floor has to step it up,” Wiggins said. “When Jimmy was here, Jimmy was a good player — that’s proven. Now it’s up to us to close out games.”

E’Twaun Moore scored a season-high 31 and Anthony Davis had 29 points and 11 rebounds for the Pelicans, who fell behind by 21 early in the second quarter.

New Orleans coach Alvin Gentry said he warned his team to be ready to face an opponent that was especially hungry.

“You’ve got prideful guys on (the Timberwolves), and they want to show the world that they’re pretty good in their own right,” Gentry said. “I thought they were going to come out and play with that intensity level, and they did, and we did not match that.”

The Pelicans chipped away, cutting their deficit to 13 at halftime and just four going into the fourth quarter. The Timberwolves scored the first seven points of the period to stretch their lead to 92-81, but New Orleans responded with a 15-2 run to take its first lead of the game on a 12-foot jumper by Jrue Holiday.

Wiggins’ 3-pointer put the Wolves back on top and Towns followed with a three-point play to give Minnesota some breathing room.

Then with 2 minutes to go, Towns made the play of the game. Playing with five fouls, he blocked Davis’ layup attempt and fed Wiggins on the other end for a thunderous dunk. Wiggins was fouled as well, and his free throw put Minnesota up 105-98.

“You can’t worry about five fouls with the game in the balance,” Towns said. “You’ve got to find a way to not foul, have good fundamentals, but also find a way to make stops and make plays.”

It was exactly what Minnesota coach Tom Thibodeau had in mind as he envisioned his two former No. 1 picks leading the Wolves into the future.

“Those are tough plays. Those are winning plays,” Thibodeau said. “I want them to continue to grow. There’s a challenge for them to continue to get better. We talked about, one game doesn’t mean you have it all figured out. Just come in tomorrow, be hungry to improve, and then be ready to play.”

The game was Minnesota’s first with forwards Robert Covington and Dario Saric, who came over from Philadelphia with injured guard Jerryd Bayless in the Butler trade.

The deal was completed Monday, meaning Covington and Saric did not join their new teammates in time for the Timberwolves’ 120-113 victory over Brooklyn that night.

Covington started Wednesday, scoring 13 points and grabbing seven rebounds. He drained a pair of long, catch-and-shoot 3s in the third quarter as the Timberwolves were trying to hold off the Pelicans’ comeback. He also chipped in two steals and a blocked shot.

“Rob is amazing on defense — he’s everywhere,” said Wiggins, who praised both his new teammates. “They fit in perfectly.”

Saric came off the bench to contribute nine points and three boards in 20 minutes.

“The last few days feel very short to me, but at the end of the day, this is basketball,” Saric said. “It was very pleasurable to be on the court. We played team basketball. I think we had 29 assists — that’s a pretty good number. It’s just the beginning. I hope we still continue to play like this every game.”

Pelicans: C Nikola Mirotic returned after missing two games with a right ankle sprain. He had 16 points and 10 boards. … Gentry said point guard Elfrid Payton is close to returning from his own right ankle sprain, but he sat out his ninth straight game.

Timberwolves: The win was Minnesota’s fifth straight against New Orleans. … G Derrick Rose (left knee soreness) did not dress after playing 39 minutes Monday in the win over Brooklyn. Rose is averaging 19.2 points and 4.8 assists per game this season. … Teague played for the second time in three days after missing six games with a bruised left knee.