The air up there

Four highlanders, four world champions, one team—there must be something about Baguio’s air

Getting to Marques “Mark” Sangiao’s house is a workout in itself.

The La Trinidad jeepney ride to Benguet State University (BSU) is just the start. To visit the Luzon’s most decorated martial arts trainer, you’ll have to march a kilometer, thread through narrow alleys, and walk a dozen steep steps.

It’s a lung-busting price to pay to breathe the same rarefied air Sangiao takes in daily.

“I used to take this route to the BSU oval,” he told the Inquirer. “It’s nifty way to warm up.”

Sangiao has always been a man of immense self-discipline. Too late to expect him to change now.

“I still do this at least four to five times a week,” he said one chilly December morning. He wrung his soaked training garb, before untucking a third shirt. “I used to do this more often. Especially when I was still a fighter.”

Routine is boring, but it brings results. Sangiao, the architect of Team Lakay’s golden era, is a fitting testament to that.

“I don’t want to project the image that I’m slowing down. Complacency is contagious,” he said, when asked about his morning jog. It’s not just a life mantra. It’s a coaching philosophy that Team Lakay has adhered to the last 13 years.

And look what that philosophy has done.

Team Lakay has had an unprecedented year in ONE Championship. As 2018 dove straight into its final months, Team Lakay climbed the penthouse of mixed martial arts with four world champions.

It’s rare that the country has that many reigning world champions at the same time in the fight industry. Rarer even that they all come from the same gym.

Team Lakay now holds more than a quarter of the belts across ONE’s 11 weight classes.

Geje Eustaquio unified the flyweight straps in Macau last June, Joshua Pacio had his turn at the strawweight in a rematch September, Kevin Belingon followed early November at bantamweight—over a legendary foe who had a sterling undefeated run—before Eduard Folayang rounded it all out at lightweight later that month. 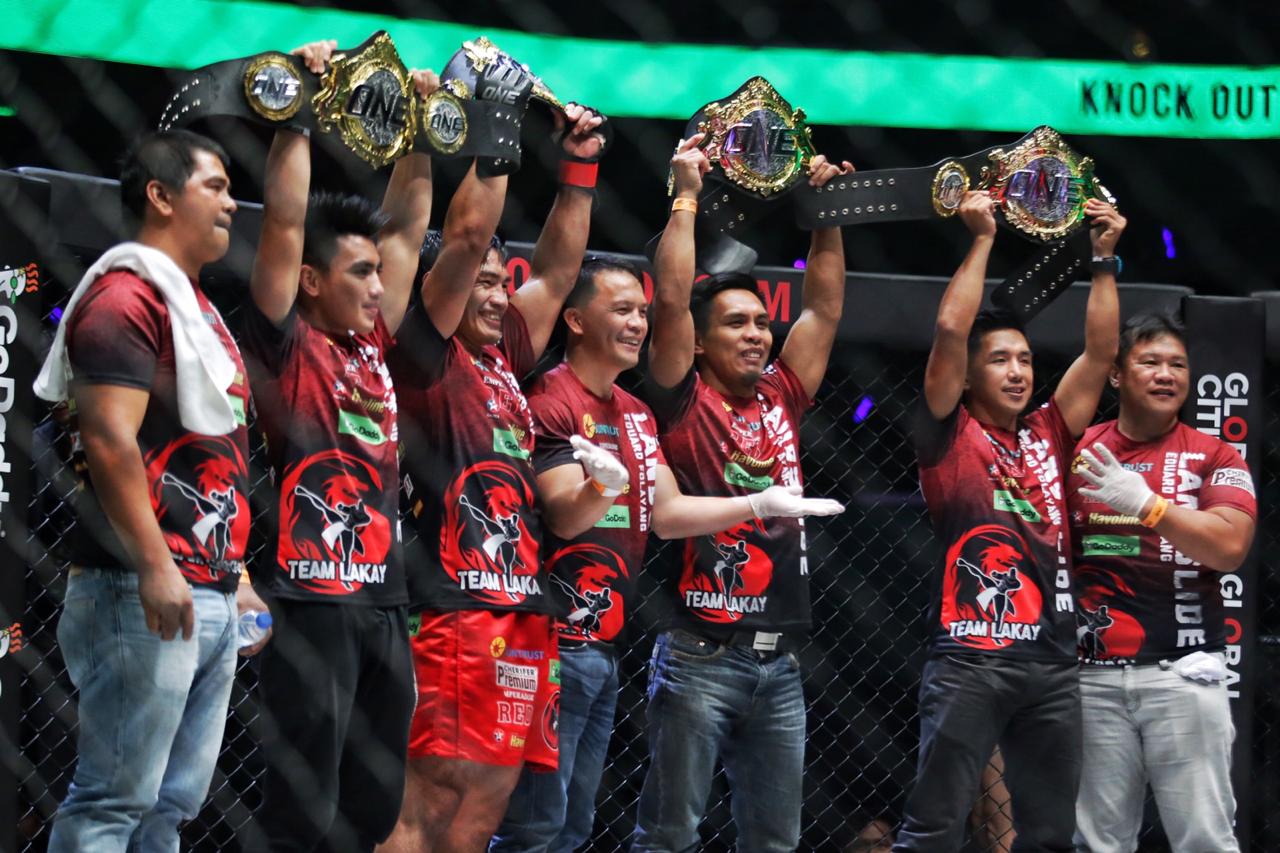 “They should’ve made a belt for the winning coach,” Folayang offered during a press conference last November, shortly after reclaiming the ONE lightweight belt. Before the media availability, the pair—long-time partners in the craft—shared a candid moment where Folayang put the belt around Sangiao’s waist.

“They were saying this is also yours as it is mine,” Sangiao said. “That’s respect right there, and I think that’s most important thing martial arts has imbibed in all of us.”

It wasn’t an easy road to the top for the four horsemen of mixed martial arts apocalypse. They tasted glory and defeat in equal parts. 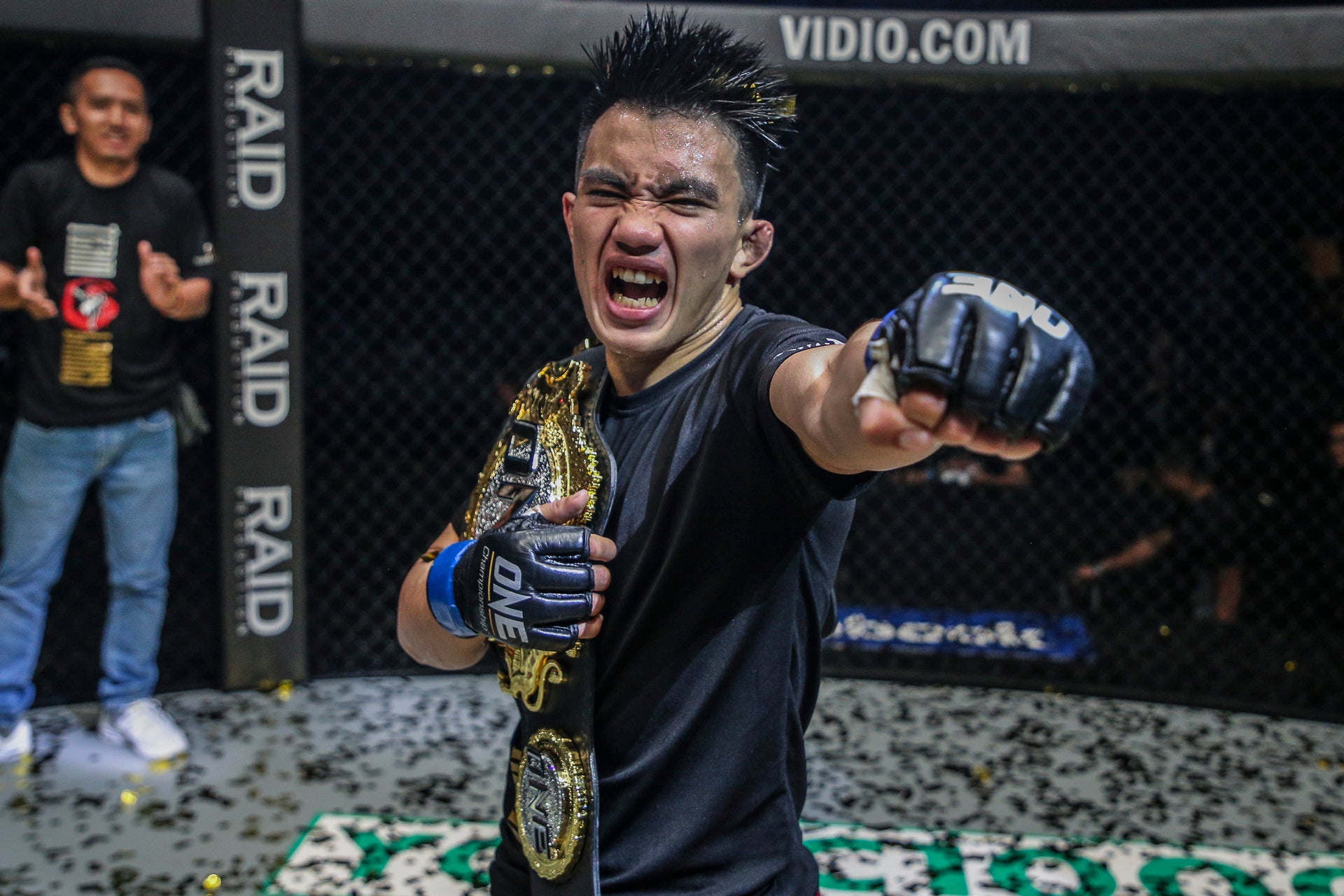 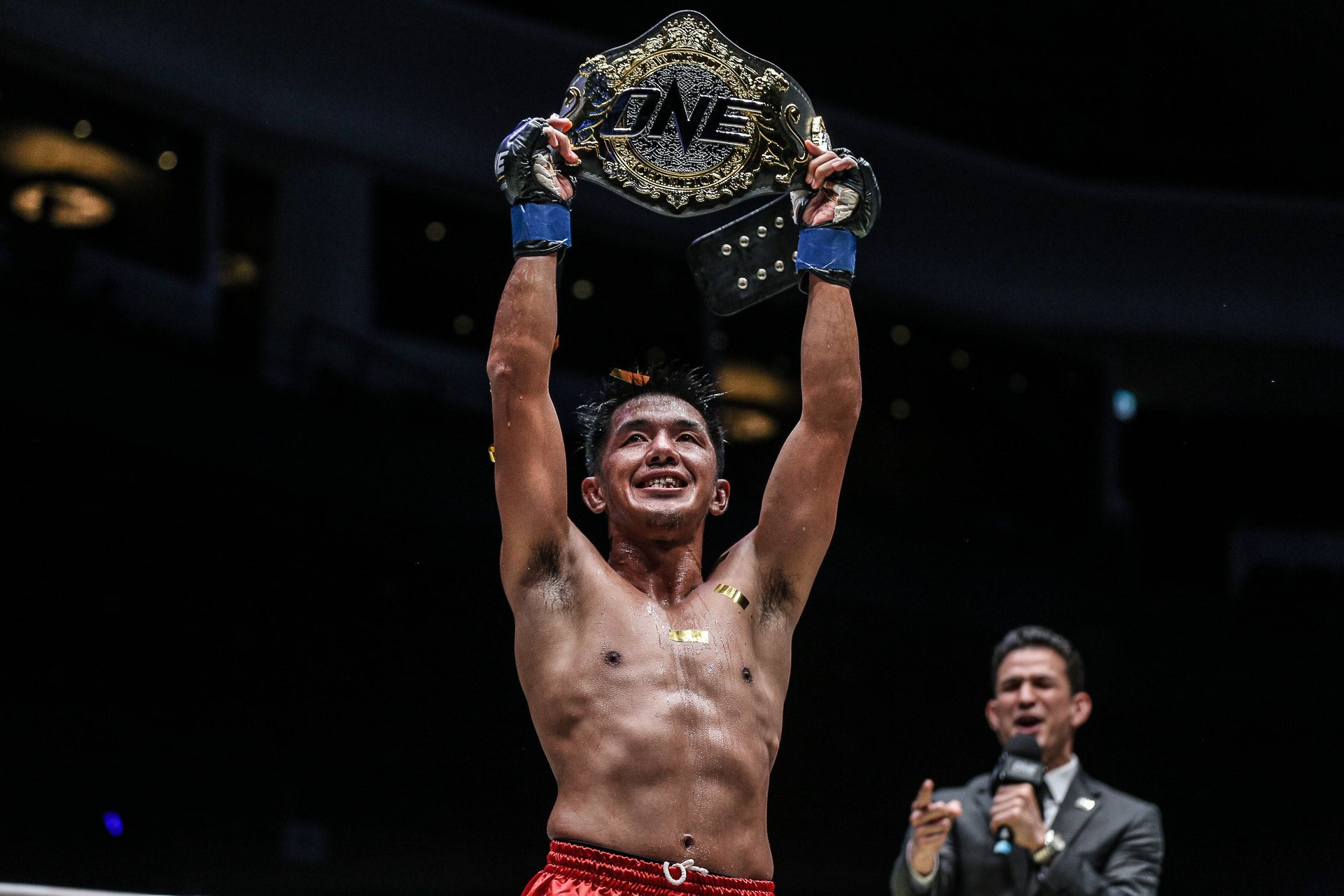 Since Sangiao took up the group’s coaching mantle full time, Team Lakay has asserted its might on both local and overseas martial arts scenes. The stable has produced high-caliber fighters who have seen action in PXC in Guam, Legend FC in China, Martial Combat Fights in Singapore, Gorilla Warfare in Saipan, and, famously, the long-running UFC—with Dave Galera blazing the trail for Filipino fighters.

Team Lakay’s biggest name currently, Folayang, was coming off a tough loss while Belingon was still haunted by his loss to Bibiano Fernandes.

“I realized there was a lot more that I needed to improve and I really learned from my mistakes from that fight,” Belingon told Sports IQ, the Inquirer’s live multiplatform sports talk show, recently. But Team Lakay is a story of resilience as it is of fighting dominance.

And it is a resilience that mirrors that of its coach.

Like every kid who milled around in Balili in Benguet, Sangiao was into basketball. “I was even a student athlete. I played in my third grade, I think,” he said. “Everyone was playing it. But around here, we’re into kickboxing, too.”

There are no posters of Michael Jordan or Larry Bird or Robert Jaworski around the old parts of his home. There are posters of local fighters, though. Some he used to coach, others he just fancied watching.

Sangiao, the fourth of six children to Kapangans Josie and Alipio, dabbled between kickboxing and taekwondo before shifting to wushu where he tapped into an inner promise.

Sangiao fought for Baguio College Foundation (now University of Cordilleras) before earning a slot with the Philippine wushu team.

After having a taste of gold, he went on to help Folayang, Mark Eddiva, and Benjie Rivera chart their paths as national athletes. JUST like nearly every kid in Balili, coach Mark’s first fell in love with basketball. It started here in this lot—the dead-end at ‘Last Turning Point,’ and starting point of the trek to Sangiao’s humble abode. | Denison Rey A. Dalupang /Philippine Daily Inquirer

“My favorite moment of my fighting career? I guess you could point to that moment in the SEA Games. It was the first time I knew for myself I wanted do it over and over again—raising my hand in victory as the flag waved, and as the national anthem rang,” Sangiao recalled.

But despite the coaching success, Sangiao thirsted for actual action, leading to a stint in the URCC. Sangiao tore it up there.

“I tried out to qualify for a slot in URCC in 2003. My memory’s a bid faded but I’m sure it was in a closed-space somewhere in Makati,” he recalled.

Sangiao then defeated Aden Zarco in 2004 for the bantamweight crown. That victory would figure as the catalyst for more URCC title conquests by Team Lakay members. Belingon went on to win the flyweight title; Rey Docyogen, the pinweight strap; and then Folayang, the welterweight throne along with nickname “Landslide,” after rounding out the stable’s string of championships.

The conquests on the ring had a hefty price: He was collecting defeats at the home front.

“You know what hurts? Losing time for your family. I got to that point,” his said, his voice turning raspy. “There were occasional misunderstandings with [my wards]. But those were nothing. This was family—and nothing hurts more than that.”

The problems caused him to spiral.

“I was there, but I wasn’t really there,” he said as his eyes glistened. “I had a hard time catching sleep. I tried to in the car. I tried drinking it off.”

“I tried to fight one last time because I felt [my problems were] already consuming me from within,” he said.

But the result of his next fight solved nothing.

Sangiao tapped out against a much younger fighter from Guam. It was a swift submission. But Sangiao would rather look at it as a submission to a greater purpose rather than to a loss. “I realized that I had to focus on just one task,” he said.

And that tasked was to shape Team Lakay into a show of formidable force in ONE Championship.

As the new year approaches, Team Lakay is now focused on keeping those belts within the confines of its famed gym up there in Baguio City’s highlands, where the fighters are cherished by an adoring throng of supporters.

All eyes will be on Pacio as he tees off Team Lakay’s 2019 with his championship defense against Japanese challenger Hayato Suzuki.

That the 22-year-old Pacio is set to headline “ONE: Eternal Glory” is a testament to how far Team Lakay has gone since going 0-5 in a single outing.

“People usually couldn’t see beyond the belts and the celebrations. They don’t see the rigors of the work athletes put in. It’s much more than the sparring and the workouts,” he raised. “Every step you take puts you into a position to make another. It’s never-ending. More than readiness, you have to be willing—to move forward.”

“I thought we needed more wrestling techniques. We even went as far as tapping the services of an Iranian in 2016,” Sangiao said. “He swung by the (La Trinidad) gym around twice a month for three months. We kept on going around gyms and inviting people over to take in as much as we could; to make us complete.”

The results are there for proof.

From 2010, Team Lakay has won 127 of all 184 major matches they fought in, translating to a whopping 70%. Within that record are seven champions and multiple title defenses.

The watershed moment came in late 2017, when Team Lakay’s atomweight bet Gina Iniong outlasted Aussie Natalie Gonzales Hills in the prelims. Danny Kingad remained unbeaten, Honorio Banario extended his streak, Belingon impressed in the co-main event, paving the way to Folayang’s masterful win to defend his crown. The stable swept the night to the delight of the MOA Arena crowd.

And now this: “Landslide” Folayang. “The Silencer” Belingon. “Passion” Pacio. “Gravity” Eustaquio. Four champions, all from the highlands. “Maybe it’s the air,” Sangiao said. “Our gyms may not be at par to that of our counterparts’ overseas, but we could always go out and train. There’s the oval, there’s the Athletic Bowl (in Burnham Park).” TO GET to coach Mark’s home, you’ll have to march roughly a kilometer to get to Balili’s ‘Last Turning Point.’ From there, you have to needle through alleys and climb flights of steep stairs—a lung-busting pay to price the to breathe the same rarefied air the ringmaster takes in daily. | Denison Rey A. Dalupang/Philippine Daily Inquirer

There is science to Sangiao’s hypothesis. Dr. Ruel Revilla, a pulmonary specialist and full professor in physiology, supports the ringmaster’s claim. Baguio City is 5,000 feet above sea level. The very location sets up for a bodily state called “hypoxia,” which indicates a deficiency of oxygen in tissues.

“The amount of oxygen inhaled by people residing in higher places is lower … this triggers the hypoxia,” he explained. “Which include ‘waking up’ of genes that stimulate blood vessel production, red blood cells, mitochondria—which improves energy utilization, and glycolytic enzymes which allow people to perform work on their reserve [energy].”

“Take for example the Peruvians in the Andes, or the Nepalese living near The Everest,” Revilla told the Inquirer. “They can withstand the harsh conditions because their bodies have already adapted to the situation. Their chests are wider, allowing for greater lung capacity. They also have rosy cheeks which signify more and wider blood vessels.”

“Since oxygen supply is low in high-altitude locations, the lungs try to improve its capacity, like breathing better, deeper and improving its reserve,” Revilla noted, while adding that improved blood flow also betters the heart and the muscles within the body. “People who train in high altitude feel fatigue later compared to their sea-level counterparts.”

But for Sangiao, it’s science and more.

“There’s teamwork, too. If you notice, we identify as ‘Team Lakay,’” he said. “You can’t be a champion all by yourself. Even if it’s an individual sport. You can never harp about ‘hey I made it all myself.’ Manny [Pacquiao] had his Freddie [Roach], his Buboy [Fernandez]. Success requires a team.”

And then there is hard work.

“Champions are not born, they are made.”

In an era of multimedia storytelling, how can news organizations tell a story across multiple platforms? The Inquirer addresses that question with its amplified content ecosystem (ACE), which allows compelling and engaging content to reach to audiences in as many platforms as possible: print, online, digital, radio, livestream, socials and podcasts. The Inquirer’s latest feature using ACE is “The Air Up There,” whose narrative was shuffled to socials, digital, online and print. The platforms tell an independent story. But consumed interdependently, they combine for a rich storytelling experience for readers. To view the other platforms, check out Inquirer Sports.