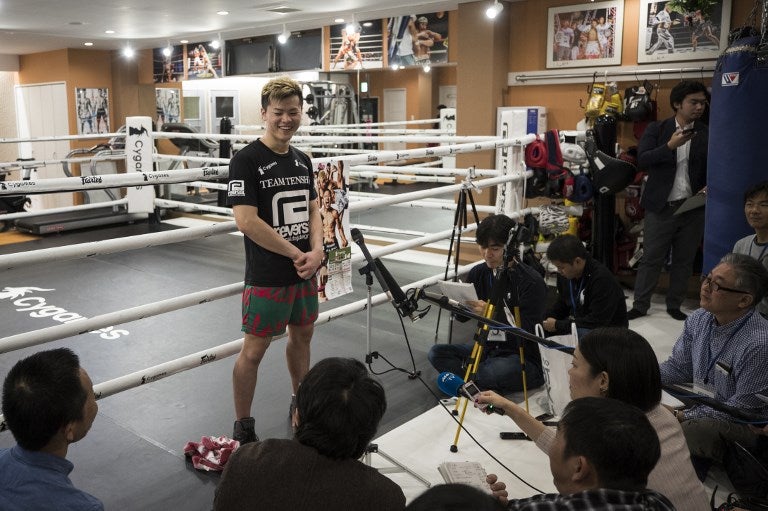 Japanese kickboxer Tenshin “Ninja Boy” Nasukawa said Tuesday he wants to use the element of surprise to defeat boxing superstar Floyd Mayweather Jr in their bout later this month.

“I want to kick his ass,” the 20-year-old baby-faced southpaw told reporters after a training session in the city of Matsudo near Tokyo.

The New Year’s Eve bout, first announced in early November, was abruptly scrapped by the unbeaten 41-year-old American after a “misunderstanding” over the fight’s terms, according to mixed martial arts promoter RIZIN.

But it was back on as an exhibition match after RIZIN chief Nobuyuki Sakakibara flew to Los Angeles for talks with Mayweather and agreed to an orthodox boxing match without kicking, which will be a disadvantage for Nasukawa.

“I want to make surprising moves,” said the Japanese fighter, who has just returned from an intensive two-week boxing training in Las Vegas. “I want to fully use the kickboxing skills I have.”

Nasukawa now weighs 61 kilograms and is is four inches (10 centimeters) shorter than Mayweather, who has won world titles in five different weight classes.

He added that he suspected Mayweather was “not taking the bout seriously”.

Nasukawa is considered something of a prodigy in Japanese fighting circles and began learning karate at the age of five.

Like Mayweather, he is unbeaten, boasting a 28-0 record as a professional kickboxer with 21 wins by knockout. He has four wins from four matches in mixed martial arts.