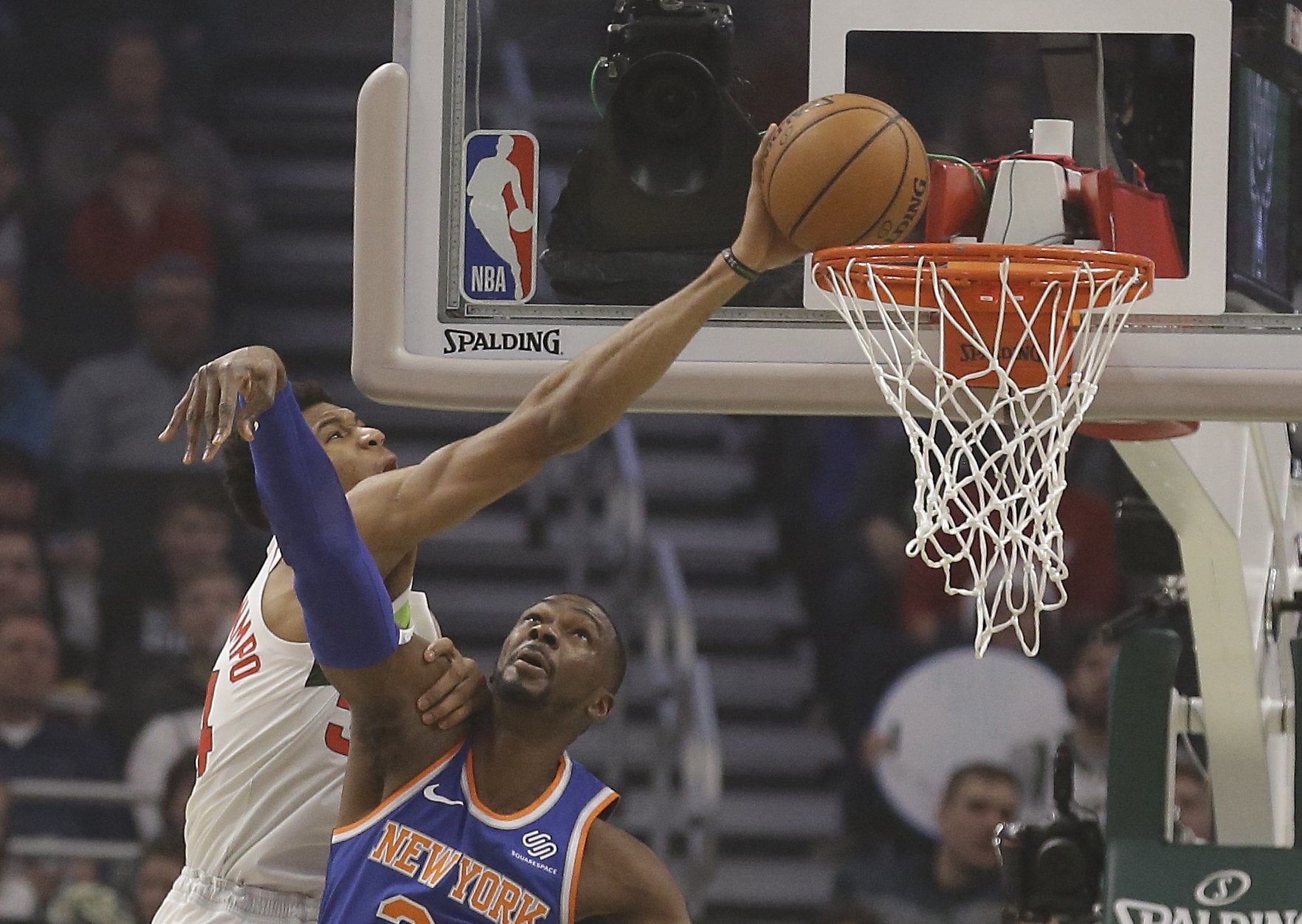 MILWAUKEE — Giannis Antetokounmpo held down his usual spot atop the stat sheet, though his most important contribution was keeping his cool.

Antetokounmpo had 31 points and 14 rebounds, Khris Middleton added 25 points and the Milwaukee Bucks beat the New York Knicks 112-96 on Thursday night for their sixth win in seven games.

Antetokounmpo was assessed a technical foul, but remained in the game after a brief altercation midway through the fourth quarter with Enes Kanter, who was ejected.

“I think it’s one of his strengths,” said Bucks coach Mike Budenholzer. “We’ve talked about during this season, there can be frustration when things are missed, or you see things certain ways. He just tends to keep his focus, keep his composure, go to the next play.”

The Bucks swept the home-and-home series, having won at New York 109-95 on Christmas. Milwaukee is a season-high 14 games above .500.

Luke Kornet, making his first start of the season in place of Kanter, tied a career high with 23 points, and Noah Vonleh added 15 points and 13 rebounds for the Knicks. New York, playing without leading scorer Tim Hardaway Jr. because of an illness, lost its sixth straight.

Kanter was hit near his eye on the previous play at the other end, eventually requiring three stitches.

“I shot the ball and I was trying to go get the rebound, offensive rebound,” Kanter said. “I think Thon Maker’s elbow just glanced against my eye and it started bleeding. And then on the other side I think Giannis was driving the basket and I stopped him. They didn’t even call a foul. And then we just got into it a little bit. And then my eye was bleeding and they said, ‘you need stitches.’ So I went in the back and the doctor just give me three stitches. Now you guys are telling me I got ejected.”

With half a quarter to play and the Knicks within 91-82, Antetokounmpo said it was important he remain in the game.

“At the end of the day, I have to help my team and close out the game,” Antetokounmpo said. “We had like eight or nine minutes left and I was just thinking about closing out the game. I just do not like when dirty plays happen that risk my health or my teammates’ health. I don’t like that.”

Referee Brian Forte said there were two situations that led to Kanter’s ejection.

“During instant replay review for the altercation, we observed an unsportsmanlike act by Kanter and that is what led to his first technical foul,” Forte told a pool reporter.

“After the out-of-bounds foul, Giannis and Kanter came face-to-face and so they were both assessed dead ball technical fouls,” Forte said.

Milwaukee used an 18-2 run midway through the second quarter to open a 44-37 lead. The Bucks extended the lead to 87-77 entering the final period.

The Bucks, who entered second in the league in both 3-pointers made and attempted, missed their first eight 3-point attempts.

Knicks: New York opened a six-game road trip, which now heads west for five games that include teams with four of the six best records in the Western Conference. “I think it’s good for us,” Knicks coach David Fizdale said. “Fifteen days out and just us, together going through the gauntlet of good teams. I think that’s a great experience for this team.”

Bucks: Milwaukee opened a six-game homestand against the Knicks, who entered 9-26. Of the next five opponents, only Toronto (26-10) is above .500.