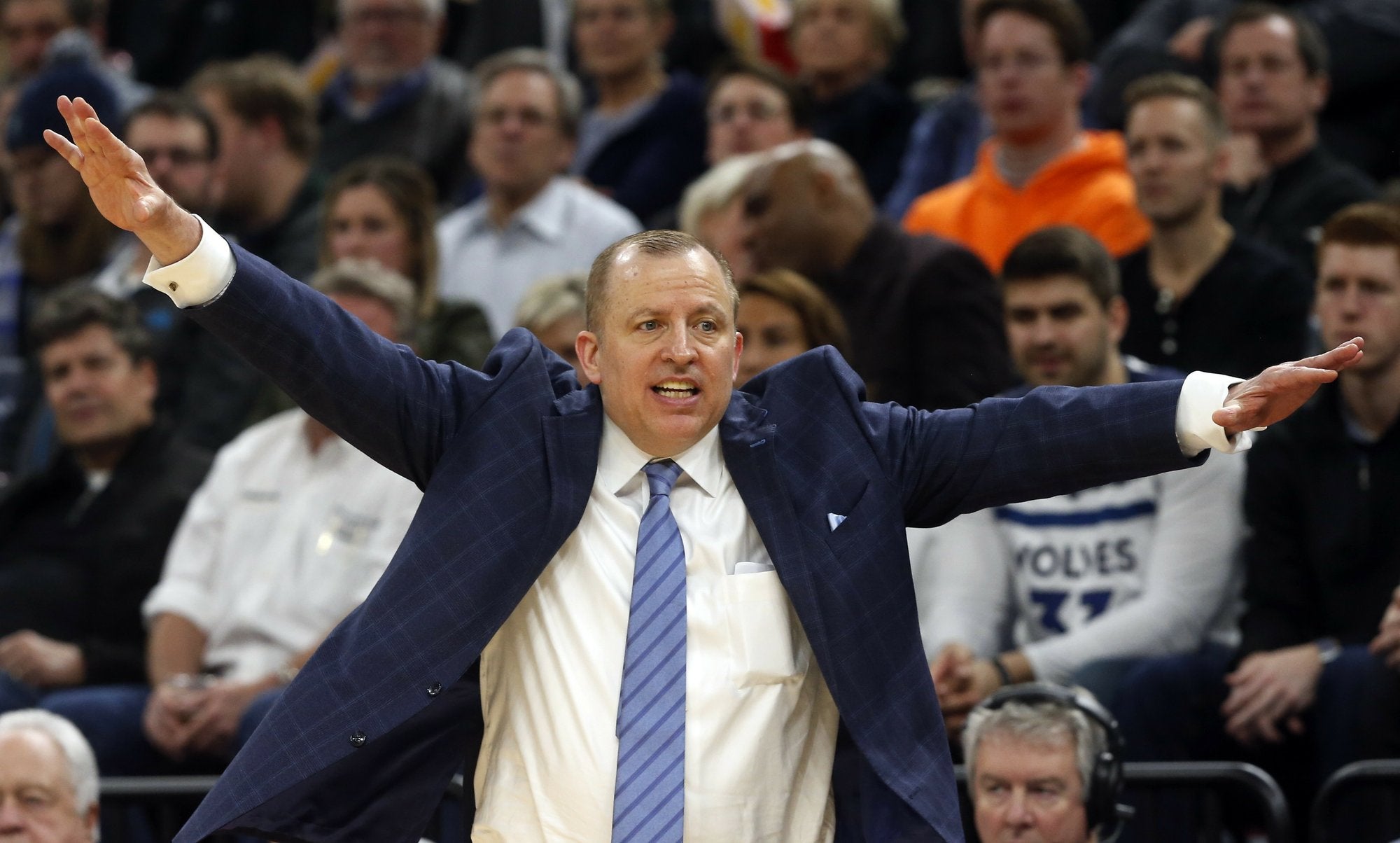 Minnesota Timberwolves head coach Tom Thibodeau directs his team against the Orlando Magic in the second half of an NBA basketball game Friday, Jan. 4, 2019, in Minneapolis. (AP Photo/Jim Mone)

MINNEAPOLIS — The Minnesota Timberwolves fired coach Tom Thibodeau on Sunday, halfway into his third season with the team that began with the turmoil surrounding the eventual trade of All-Star Jimmy Butler.

Thibodeau was dismissed about an hour after the 108-86 victory over the LeBron James-less Los Angeles Lakers .

Scott Layden will remain the general manager overseeing the basketball operations and assistant coach Ryan Saunders will be the interim head coach for the remainder of the season.

“We would like to thank Tom for his efforts and wish him all the best,” Timberwolves owner Glen Taylor said in a statement. “These decisions are never easy to make, but we felt them necessary to move our organization forward.”

The Athletic first reported that Thibodeau, who was also the president of basketball operations with full authority over the roster, had been let go. Saunders is the son of the late Flip Saunders, who’s the winningest coach in club history.

Thibodeau finished 97-107 with the Wolves, who returned to the NBA playoffs last spring after a 13-year absence. As Butler, Thibodeau’s prized acquisition who played for him in Chicago, forced his way out of Minnesota, however, he found himself in a tenuous spot.

The Wolves barely reached the postseason, needing to beat Denver in overtime at home in the final game of the regular season, and were beaten by Houston in five games in the first round. Butler pushed the organization into a corner when his stance that he wouldn’t sign a new contract with the team became public two weeks before training camp began.

The insistence of Thibodeau and Layden to hang on to Butler as long as possible, shrugging off the distraction as simply part of life in the league, backfired as Butler protected his health by playing in only select games. The Wolves started 4-9, and after a winless five-game road trip, the awkwardness was too much for even Thibodeau and Layden to ignore. Butler was sent to Philadelphia in a package that brought Robert Covington and Dario Saric, two promising players who’ve fit relatively well in the rotation.

The Wolves are only 15-12 since the Butler deal, though, in a Western Conference that is as stacked as ever. With Taylor’s commitment to maximum-salary contracts for both Karl-Anthony Towns and Andrew Wiggins, there’s no more room for patience with a franchise that has had to start over so many times since Kevin Garnett led the Wolves to the Western Conference finals in 2004. The most recent setback was the death of the beloved Saunders, who served as coach and president of basketball operations in the 2014-15 season before his death from cancer.