Vince Carter watches the good times, but is he near goodbye? | Inquirer Sports
Close
menu
search

Vince Carter watches the good times, but is he near goodbye? 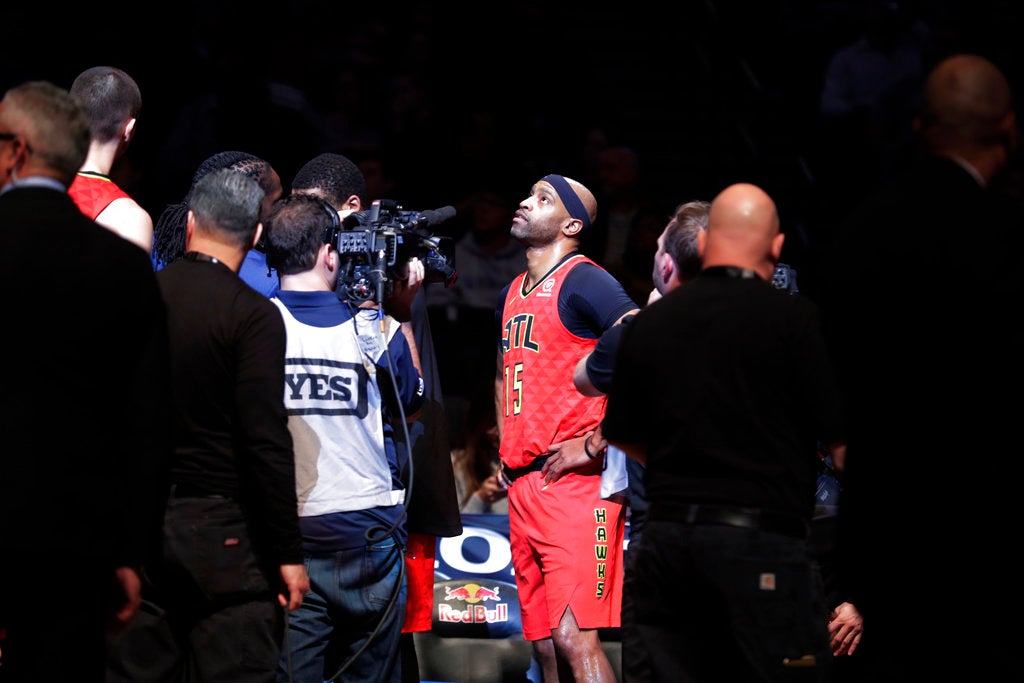 Atlanta Hawks’ Vince Carter (15) watches a video tribute to him during the first half of the team’s NBA basketball game against the Brooklyn Nets on Wednesday, Jan. 9, 2019, in New York. (AP Photo/Frank Franklin II)

NEW YORK — Vince Carter looked up at the highlights, enjoying the view of himself back in the days when he was among the NBA’s highest flyers.

He’s about to turn 42, now in his 21st season, and he doesn’t jump quite like the guy being shown Wednesday night on the Barclays Center overhead screens.

The Nets honored Carter, who is the oldest active player, with a tribute video during their game against Atlanta, a way to say thank you for his 4 ½ seasons with the franchise.

“It was great. Any time you can see old video of when you were young and spry and springy and all of that good stuff, I mean, it’s always great to see,” Carter said.

But was it goodbye?

Carter hasn’t said if he plans to retire following the season. He would make NBA history if he returns, as nobody has played 22 seasons in the league.

So was the video premature?

“I’m OK with it. Either way it’s cool,” he said with a smile. “I’m very thankful for it, that they even considered it.

“When it was mentioned to me I was like, ‘You’ve got to be kidding me.'”

The video was played in the first half, shortly after Carter had come off the Hawks’ bench for the first time. He received ovations from the crowd both times, and he acknowledged the fans after the video played.

He never played in Brooklyn but was one of their best when the Nets played in New Jersey, ranking third on the franchise scoring list while playing in the backcourt alongside Jason Kidd.

“Obviously it wasn’t in this building, but nevertheless the feeling is still the same,” Carter said. “My five years here was fun, a lot of fun. J Kidd made it obviously easy to play the game up and down and create a lot of highlights and memories, so it was awesome to see.”

The Hawks’ road trip has been right down Carter’s memory lane. They played Tuesday in Toronto, where he began his career and has repaired his relationship with fans that was damaged when he pushed for the trade that landed him in New Jersey.

He’s still productive, starting eight games and averaging 7.2 points, with a 21-point performance last month. If he comes back, he breaks a tie with Kevin Garnett, Robert Parish and Kevin Willis for the most NBA seasons. (Dirk Nowitzki, like Carter drafted in 1998, is also in his 21st season).

Carter was informed during his postgame interview that he was overheard as he was leaving the arena Tuesday in Toronto telling someone that he would see him next year.

“Really?” Carter said with a laugh. “Well, I’ll see you guys next year.”