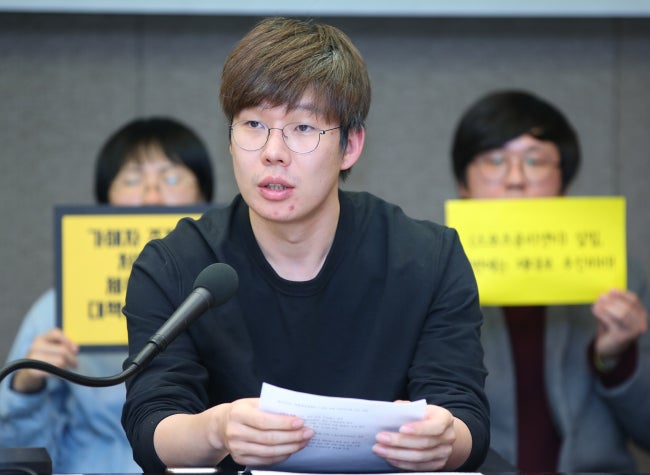 The Young Skaters Association leader Yeo Jun-hyeong speaks at a press conference on Thursday. Yonhap via The Korea Herald

The Young Skaters Association released a statement Wednesday claiming that there were more sexual abuse cases in Korea’s skating community yet to be disclosed.

“The association has investigated the wrongdoings committed by influential people in the community, and we found that six more female skaters have suffered sexual abuse by their coaches besides Shim,” Yeo Jun-hyeong, the leader of the association, told The Korea Herald in a phone interview.

According to Yeo, the victims could not come forward sooner as they worried the Korean Sport and Olympic Committee’s leading members would overlook the cases and cause additional harm to the victims.

Shim’s recent revelation, however, led two of the victims to disclose their experiences of abuse. The Olympic medalist and 1,000-meter world champion filed a complaint against her former coach Cho Jae-beom, accusing him of repeated sexual assault from 2014 until just weeks before the 2018 PyeongChang Winter Olympics.

“The silence of the victims might be the result that the leading members want,” the association’s statement read.

“During the time that the victims were worried about revenge or additional harm from the committee, some other skaters might suffer from similar painful cases.”

The two victims plan to hold a press conference next week and take legal action against the perpetrators. The association has been talking with the other four victims, but they are reportedly still reluctant to come forward out of fears of retaliation.

The association said it would reveal more cases if the government protects the victims and takes actions to root out the wrongdoings of influential people in skating’s communities. Also, the association called on politicians who have been protecting and supporting the wrongdoers to come out into the open.

Cho has been serving a 10-month jail term for the assault of four skaters that dates to 2011. One skater asked for the punishment to be mitigated after coming to an agreement with Cho.

Two more of the skaters agreed to mitigated sentencing in an appeal trial that is still ongoing, as Cho’s acquaintances reportedly called and visited the families of the victims repeatedly.

But two of the three victims backed out of their agreements with Cho on Wednesday. The two changed their minds after hearing about Shim’s case and urged the court to impose stronger punishment against Cho.