Now Ateneo's King Eagle and the first in line in the Ravena household, Thirdy looks back at the year that changed everything

The one college season that changed Thirdy Ravena’s varsity career forever was the one where he didn’t play a single UAAP basketball minute.

It was the darkest chapter in his young Ateneo career, and one that seemed to reinforce a popular knock on him: In a family of champions, Ferdinand Ravena III was never the first in line.

“I’ll be honest with you; I grew up living under Kiefer’s shadow and my dad’s shadow. Always being compared,” Thirdy told the Inquirer.

There was no escaping it. Every talk about him inevitably drew out mentions of the successes of his brother Kiefer and father Bong—a former pro who was the PBA’s Rookie of the Year in 1992.

And that one season changed everything. He emerged from the underworld of academic ineligibility different in every way: He was bigger, sinewy arms popping out of a form-fitting jersey, underscoring a hulking frame. He was better, flashing an all-around game that stretched to both ends of the floor.

But he had to start from rock bottom, from a phone call that shattered the calm of a family that was built, it seems, on success.

“I was in the car ride, going for a commercial, a photo shoot,” Kiefer said. The older Ravena sibling was with his mom, Mozzy, and volleyball superstar Alyssa Valdez. “We were talking nonchalantly and then all of a sudden, Thirdy calls. He had this deep voice that sounded like, ‘Ma, I didn’t make it. What can we do? Help me.’” 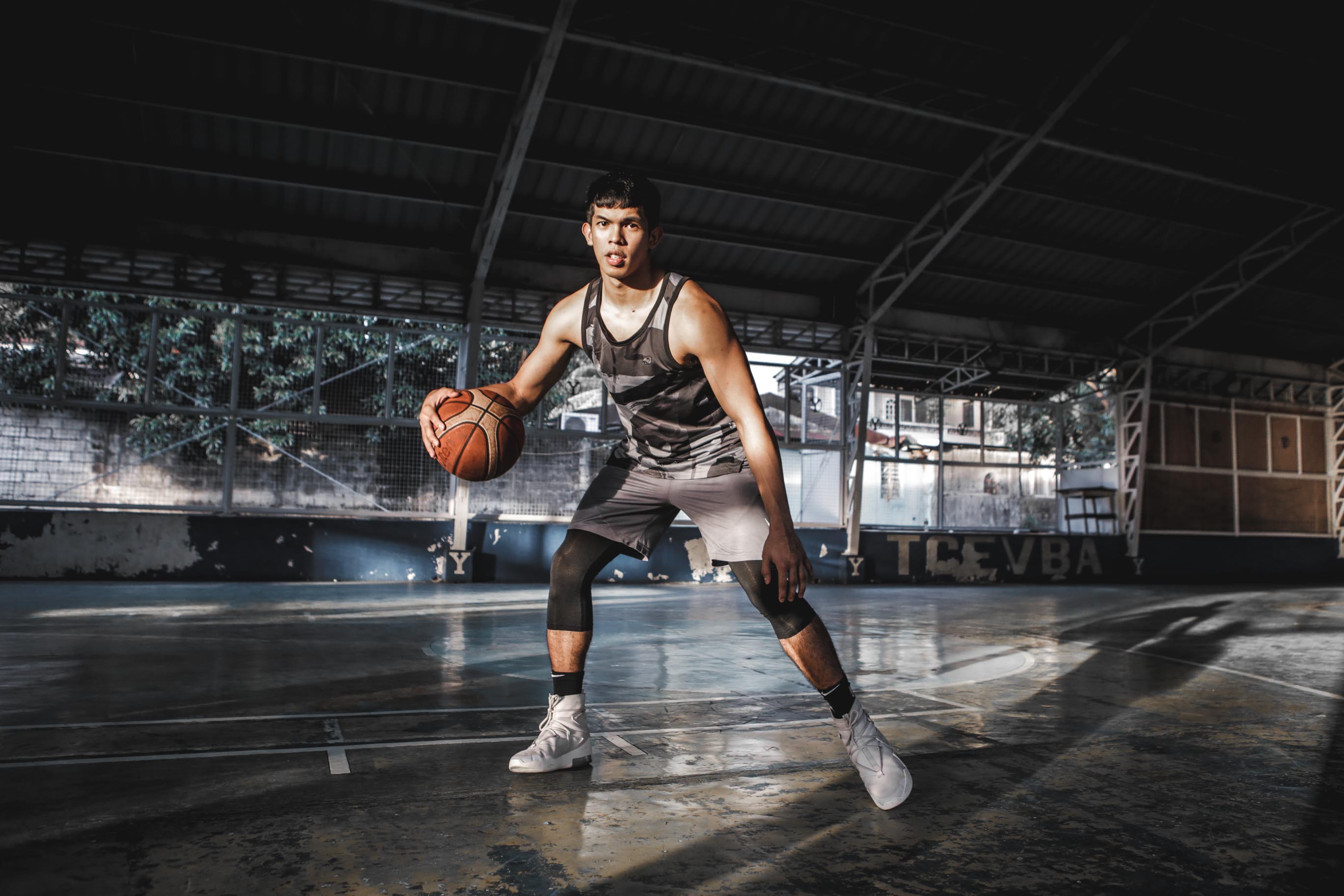 Thirdy missed a chance to play with brother Kiefer in his final year. Photo by Tristan Tamayo/INQUIRER.net

“Alyssa and I looked at each other and sensed there was something wrong. We weren’t really sure if what we heard was right but mama was panicking. Then, she told us, ‘Thirdy failed and he can’t [make up for] his grades anymore because it was already out.’”

“Of course, I was shocked. Like (expletive) he’s not going to be able to play in my final year,” he said.

Thirdy, quite expectedly, was more emotional.

“It was tough. I cried. I cried a lot knowing that I wouldn’t be able to play,” said Thirdy.

In that corner of the mind inhabited by doubt, Thirdy had the sense that the setback would only give his critics credibility. They had already come down on him hard, after all, the moment he stepped into the court as a member of Ateneo’s senior squad.

His successes as a high school star evaporated in a forgettable rookie college season. “The moment I played my first game the people were like, ‘Why is Thirdy like that in college? His game was different in high school’ or I would hear stuff about how my brother was way better than me,” Thirdy said. “I was aware of it. I see it on social media, I hear people talk about it and sometimes I really couldn’t help but compare myself to my brother because he played really well in his first year.”

The only way to shut down the noise was to focus on other things. Like getting better, for instance. Like rising from an adversity his family had never dealt with until then. Bong Ravena had a a trouble-free pro career, winning five PBA championships and getting All-Star nods. Kiefer was a two-time UAAP champ and two-time college MVP and made the All-Star in the PBA in his rookie year.

They dealt with setbacks, yes. Injuries, mostly. Last year, Kiefer was slapped a Fiba ban for taking a health drink that had prohibited ingredients in it. But until Season 78 of the UAAP in 2015, Thirdy’s ineligibility was the Ravena family’s sporting debacle.

And the fact that it had to do with academics made it worse.

“It wasn’t as if it was an injury that kept him out,” Kiefer said. “It was grades—which was all in his control. It’s all on you whether you pass or fail. You cannot blame anybody else but yourself.”

Thirdy plunged into that absent season hungry to prove himself. Without a way to measure his success rate (he was barred from even practicing with Ateneo’s Team), and away from the spotlight, Thirdy pushed himself hard.

“Before school I’d work out and after, I would work out again and it was pretty hard because I was just all by myself,” said Thirdy. “It was a tough year. It was hard for me to figure out what level of basketball I was in already, if I was able to keep up with my batchmates, if I was on the same level as them or if I was lagging.”

“What I did was to make sure I was doing my job.” Thirdy Ravena sat out UAAP Season 78 due to academic deficiencies.

“You still can’t help but think about [the criticisms]. It’s painful of course. The pain is always there, but it’s really more on what I can do with that.

“Instead of making things harder for me, I just used it as motivation to do my job. If I do my job well, they would keep quiet. They won’t have anything to say about you if you do your job well.

“It’s actually a choice. With what I wanted to do with my life. With that year that I had to sit out, I had a choice. I could either think about not playing basketball anymore or to bounce back in a way so people wouldn’t doubt me again. That was my mentality.”

He chose to play. He made his comeback wearing a different jersey number, 0, to remind himself of “the number of people that can stop me from chasing my dream.”

When Season 79 came around, Thirdy was ready. UAAP Season 79 was the start of Thirdy’s comeback. Photo by Tristan Tamayo/INQUIRER.net

“In that first year when I went back we were sixth seed, people thought we’re not going to get higher than sixth place. They didn’t even count us in the Final Four, but we made it to the Finals,” he said.

Ateneo finished second to rival La Salle, then powered by the talented Ben Mbala. That gave Thirdy even more motivation, especially after a pedestrian Finals performance, where he averaged just 5.5 points on 11 percent shooting from the field, 5.5 rebounds, 2.5 assists, 1.5 steals and 3.5 turnovers.

Then Season 80 came. It was his best statistical season and it was the year he really shone as an all-around star. It was also the year Ateneo toppled Mbala and the Archers, with Thirdy emerging the Finals MVP.

“When the team finally won the championship, it was a feeling of satisfaction and finally being able to breathe a huge sigh of relief,” he said. “Finally, everything that I worked hard for paid off in that Finals series.”

Season 81 was a curtain call for Ravena, as he spearheaded Ateneo’s annihilation of a hard-fighting University of the Philippines in the Finals.

After nearly assembling a triple-double to start the series, Thirdy, during the title-clinching game, tallied 38 points on a 13-for-18 clip to masterfully tow the Eagles to their second-straight UAAP crown. He also added six rebounds, six assists and three steals in that game. “There’s this conversation over dinner, the day after the UAAP Finals,” recalled Kiefer. “It was just me, Alyssa (Valdez), mom and dad. Thirdy was out celebrating… I opened the conversation saying, ‘Pa, aminin mo, si Thirdy nung last game, hayop.’”

Bong, who had long been hard on Thirdy because he expected much from him, who told him during his year of ineligibility that he had to man up and pull himself out of the misery he inflicted on himself, finally let out a little praise.

Thirdy had finally silenced his critics.

“That year was the year we separated ourselves from everyone else and it was tough. It wasn’t easy. I won’t say we were able to do that really well, but I was happy that we did it,” he said.

Within the Ravena family, where Thirdy also faced a lot of tough love, the criticisms on his inconsistency died. Kiefer, laughing, said “we all shut up after that [title-clinching] game.”

“It was just one of those games where you’re in another dimension, you’re in a trance, you’re in a zone so much you can no longer feel you’re tired. Thirdy is now the ruler in the Ravena household. Photo by Tristan Tamayo/INQUIRER.net

“That’s the only way how to shut your family up, right? Dad and I agreed, this is Thirdy now.”

This is Thirdy now. Current ruler in the Ravena household. Current King Eagle. First in line.

“[The best advice I received was] it’s not about trying to be someone else but being the best version of yourself. Coach Tab [Baldwin] told me that in a one-on-one conversation in the gym [when I was ineligible],” Thirdy said.

“That’s been my mentality ever since he told me that and that’s what I’ve been trying to do still until now.”

And all that success can be traced to that one missing year in college, where everything changed for Thirdy Ravena.

“Looking back, I feel like I shouldn’t have [felt bad about the ineligibility] at all knowing how he is right now—how that one year benefited Thirdy so much,” Kiefer said.

“If he hadn’t gone under those circumstances, he could’ve been peaking only now. It could’ve been a totally different story.” Graphics by Tristan Tamayo