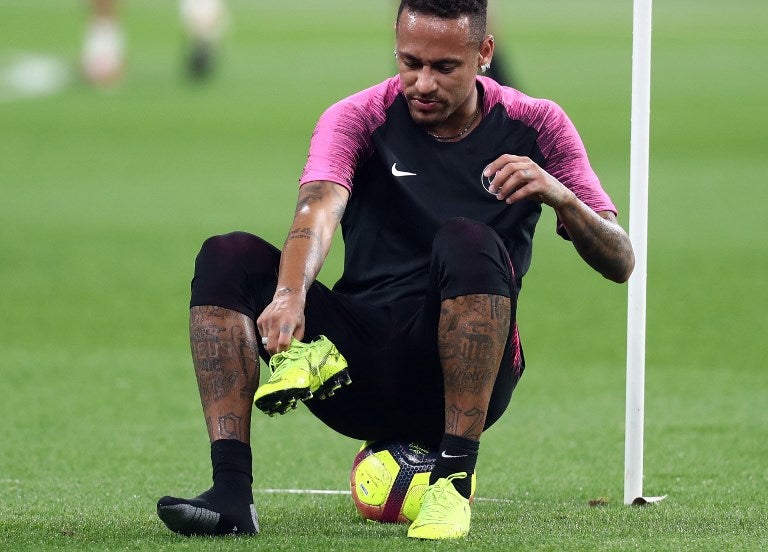 (FILES) This file photo taken on January 15, 2019 shows Paris Saint-Germain’s Brazilian forward Neymar adjusting his shoe during the team’s winter training camp at the Khalifa International Stadium in Doha. – Paris Saint-Germain’s coach said on January 28, 2019 it would be “super difficult” for Neymar to be ready in time for the Champions League last-16, first leg against Manchester United at Old Trafford on February 12. (Photo by Karim JAAFAR / AFP)

Neymar will miss both legs of Paris Saint-Germain’s upcoming Champions League last-16 tie against Manchester United after the French club confirmed on Tuesday that the world’s most expensive player would be out for 10 weeks with a metatarsal injury.

However, Neymar will not undergo an operation, with PSG saying the Brazilian had instead agreed on “a conservative treatment” that could see him return in time for the Champions League quarter-finals in April should they qualify.

“After detailed analysis by specialists, a consensus was reached of a conservative treatment of Neymar’s injury to the fifth right metatarsal,” the French champions said.

“Informed of this recommendation, Paris Saint-Germain’s Brazilian international striker agreed with this protocol. As a result, Neymar is expected to return to the field within 10 weeks.”

Neymar suffered the injury in PSG’s French Cup win against Strasbourg last week, and his coach Thomas Tuchel had already all but ruled the 222-million-euro forward out of the first leg against United at Old Trafford on February 12.

The second leg of that tie is scheduled for March 6, and the timeline announced by the club means he could just make it back in time for a quarter-final first leg, due to be played on April 9 and 10. The second legs are set for the following week.

“Paris Saint-Germain sends its strongest support and encouragement to Neymar Jr. to overcome this injury, with the courage and determination that the player has always shown,” the club added.

While Neymar will now sit out a crucial period in PSG’s season, there has also been concern back in Brazil, which will host the Copa America in June and July.

An operation would have put Neymar’s participation in that tournament at risk, as well as effectively ending his club season.

Brazil coach Tite and national team doctor Rodrigo Lasmar have been in Paris this week to visit Neymar, who suffered a fracture to the same right foot at the end of February last year.

He underwent an operation, performed by Lasmar, and returned just in time for the World Cup in Russia last June.