Clippers rally from 28 down, beat Celtics 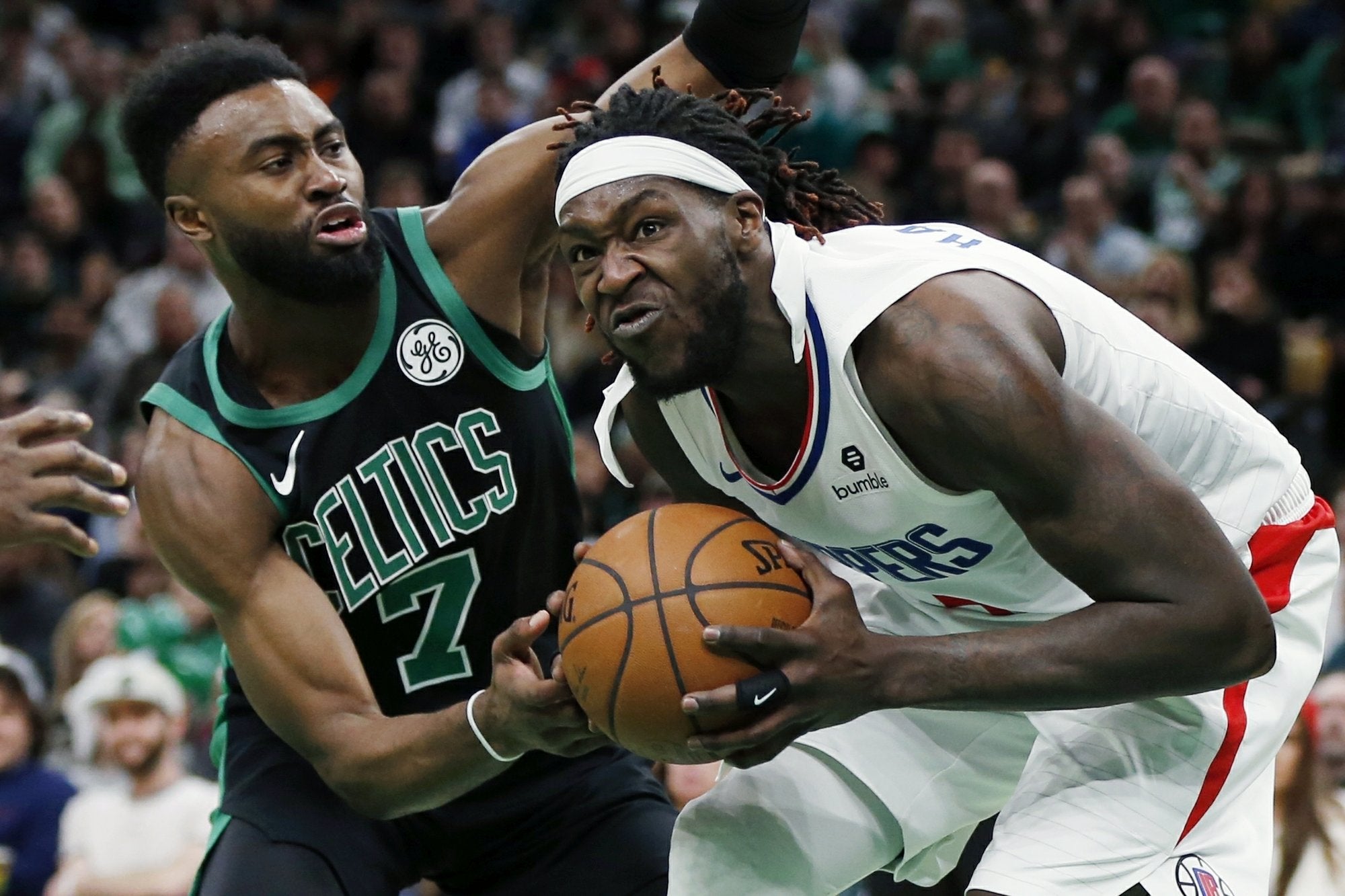 BOSTON — The “Beat L.A.!” chants turned to boos as the Boston Celtics blew another big lead to another Los Angeles team.

One game after the Lakers rallied from 18 points down to win in Boston — and six days after the Patriots beat the Rams in the Super Bowl — the retooled Clippers erased a 28-point deficit on Saturday night to beat the Celtics 123-112.

“We didn’t have it. We didn’t have anything. To pull it out was special,” said Clippers coach Doc Rivers, who led Boston to the 2008 NBA championship. “We were taking notes already for the next game. That’s how far we were out of it.”

Montrezl Harrell, who scored 21 points, forced two turnovers in the final two minutes, and Patrick Beverley hit a pair of 3-pointers in front of the Boston bench to help the Clippers pull away. Danilo Gallinari had 19 points and 10 rebounds and trade deadline acquisition Landry Shamet scored 13 of his 17 points in the fourth quarter.

“I learned a lot in a really short time about this team,” said Shamet, who came from the 76ers in the deal that sent Clippers leading scorer Tobias Harris to Philadelphia. “We played pretty well together for this being our first time as a group.”

Gordon Hayward scored 19 points and Jayson Tatum and Terry Rozier had 16 apiece for Boston. The Celtics followed their highest-scoring half of the season with their lowest-scoring quarter, blowing a 28-point lead for the first time in 15 years.

“I guess it just kind of snowballs on you,” Hayward said. “It’s the NBA, man, it’s how it works.”

The Celtics collapse corresponded to the loss of Kyrie Irving, who left with a sprained knee in the second quarter, when the game seemed comfortably in hand. Coach Brad Stevens said Irving would have more tests on Sunday.

“His knee buckled a little bit in the second quarter, and so that’s all I know,” he said.

Boston scored 15 straight points and finished the first quarter with a 23-point lead, then extended it to 68-40 in the second. The Celtics led 74-53 at halftime, but the Clippers outscored them 28-12 in the third.

Los Angeles finally tied it 100-all, bringing boos from the crowd that expected an easy victory against a team that added five new players at the trade deadline. Gallinari followed with a jumper to give the Clippers their first lead.

The Celtics were down by a point when Marcus Smart missed a 3-pointer, then tried to take a charge on Harrell but didn’t get the whistle. The Boston guard was on the floor, hoping for a call, when Beverley hit his first 3.

Harrell followed by stealing the ball from Hayward, then bounding down the court with a Celtic on either side before going in for a two-handed dunk that made it 114-107. After Tatum hit a 3, Beverley answered, and then Harrell poked another ball free to preserve the lead.

Irving left with 2 1/2 minutes left in the second quarter after spraining his right knee while weaving through traffic on defense. Boston led by 20 at the time, and the team quickly announced that he would not return.

Irving finished with 14 points and two assists in 14 minutes. He missed the last 15 games and all of the playoffs last year with injuries to his left knee.

The game was the last in a rivalry week for Boston and Los Angeles that began with the Super Bowl. The Celtics lost to the Lakers on Thursday night, and the Bruins beat the Los Angeles Kings earlier Saturday 5-4 in overtime.

The Red Sox also beat the Dodgers in the World Series, back in October.

Garrett Temple, Ivica Zubac, JaMychal Green and Shamet all made their debuts for the Clippers after being acquired by Los Angeles at the trade deadline. Temple scored 11 points, Zubac had 12 with nine rebounds and Green scored 2.

Clippers: Monday’s game against the Timberwolves completes a six-game trip, during which the team will have traveled approximately 6,659 miles — the fifth-most in the league this season, according to travelmath.com. They improved to 3-2 on the trip. … The 42 points in the fourth quarter tied a season-high for any quarter.

Celtics: Fell to 22-8 at home. The Celtics went 25 for 31 from the free throw line, snapping a streak of two straight games without missing a foul shot. … They shot 4 for 22 from the floor in the third quarter.

Clippers: At Minnesota on Monday night.

Celtics: At Philadelphia on Tuesday night.

Read Next
‘Successful’ Dubai stint for 3rd-place Mighty Sports, says coach Charles Tiu
EDITORS' PICK
Bong Go demands ‘fair reporting’ from ABS-CBN but will appeal to Duterte to save jobs
Mallorca City: Home of Cavite’s finest industrial hub
Wilder says costume wore him down before Fury did
Franchise of media giant to go on Guevarra tells senators
ABS-CBN apologizes to Duterte for 2016 election ad mess
Here’s How Protein and Calcium Deficiency Can Affect Your Kid’s Health
MOST READ
Dominguez: ABS-CBN account on unaired ads ‘does not tally’ with Duterte campaign experience
Jordan: ‘When Kobe Bryant died, a piece of me died’
Duterte: Set aside petty political differences to ensure Edsa legacy lives on
Lacson: For House to sit on pending bills ‘reeks of abdication’
Don't miss out on the latest news and information.