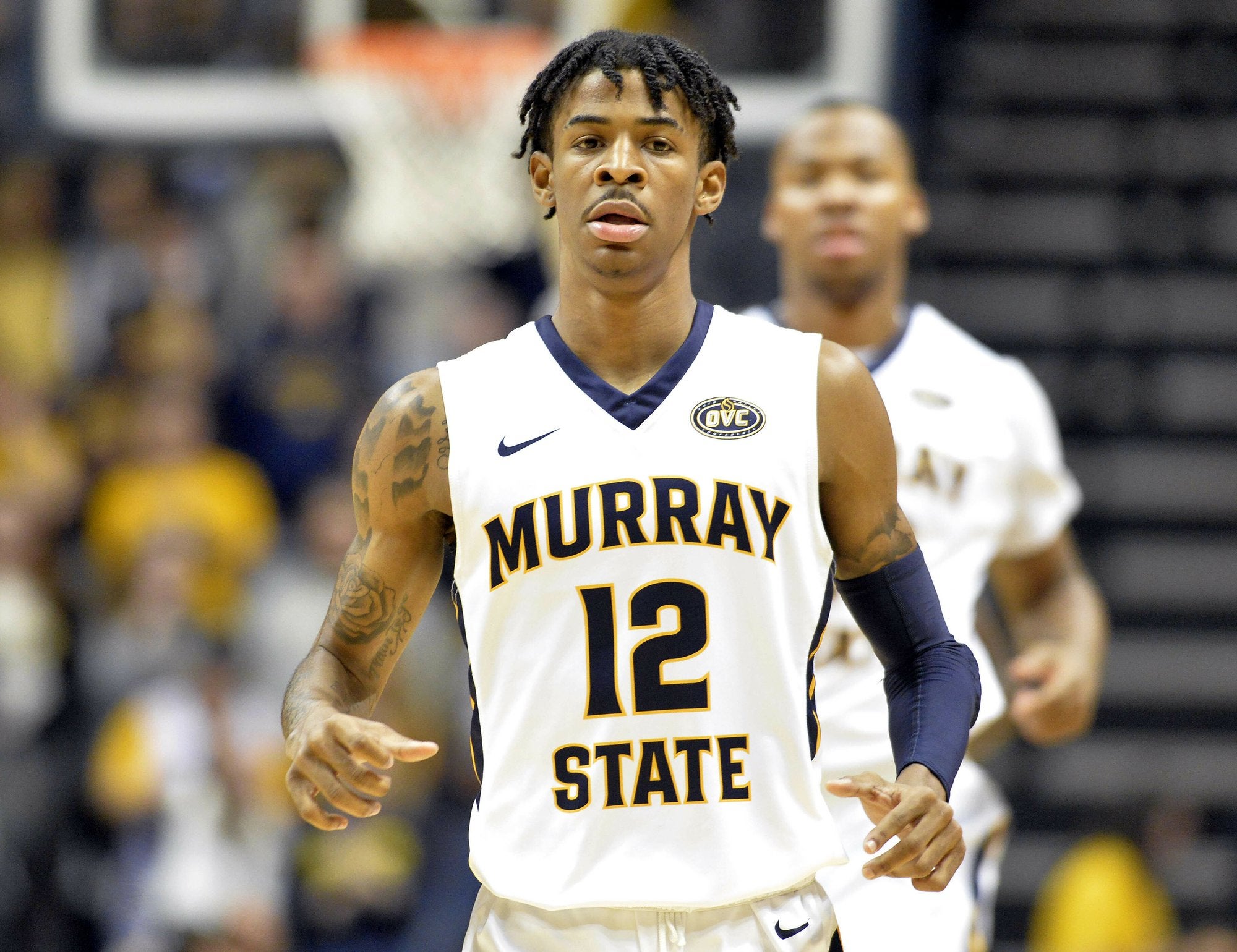 Ja Morant is finding ways to stay grounded following his ascension to the bright lights of college basketball’s national stage.

The high-flying Murray State point guard is off social media to the dismay of 141,000 followers on his verified Twitter account. He is not listening to lofty projections of being a top-three NBA draft pick if he leaves after this season.

And until Morant’s injured right ankle heals, he’s being careful with his highlight-reel dunks that turned him into an overnight sensation.

“There’s still a little bit of pain in it,” said Morant, who turned the ankle in the early minutes against Belmont on Jan. 24. “I’m playing under the rim now, so …”

Nonetheless, his sophomore season has been over the top.

The 6-foot-3 guard became a sensation with his acrobatic dunks, rivaling those by his former AAU teammate — Duke’s Zion Williamson.

All the attention has taken some getting used to.

“Honestly, it surprised me,” said Morant, who also leads Murray State with 5.6 rebounds per game. “I didn’t think I would be here right now in this position I’m in. I know eventually that it would have played out in the end, but it happened fast.”

If the draft projections play out, Morant could be selected right after Williamson. Their AAU team — the South Carolina Hornets — also featured guard Devontae Shuler, who now plays at Mississippi.

Williamson was the man on that AAU squad, though Morant, a year older than Williamson and just 6-0, was still growing. Even so, their AAU coach, Ricky Taylor, said Morant’s point guard skills and floor leadership were “unreal” — not to mention his ability to elevate.

“He could get off the ground then, but he’s getting to the rim,” Taylor said. “Those three more inches have helped him a lot. He’s definitely more aggressive now, whereas he didn’t have to be then.”

The national narrative about Morant almost seems like this is his first year on Murray State’s campus.

But he had a solid freshman season, averaging 12.4 points, 6.6 rebounds and 6.4 assists and helped the Racers win the Ohio Valley Conference to reach the NCAA Tournament.

Now, he has taken his game to another level, averaging 23.9 points and leading the nation in assists at 10.4 per a game. He wants to become the first player to finish averaging those lofty numbers since assists became an official NCAA statistic in 1985-86.

And though Morant’s draft stock is rising and financial advisers have been in constant contact with dad Tee Morant, any decision about his son’s future will have to wait until the spring.

Nobody is counting him out, not after his performance in the game he injured his ankle. He returned after the injury and finished with 20 points and nine assist in a 79-66 loss to Belmont.

“I knew how resilient he was and his threshold for pain,” Tee Morant said of his son in a phone interview with The Associated Press. “Once I saw him jogging, I knew he was coming back in.”

It’s been an impressive journey for a little-known recruit playing for a small mid-major often overshadowed by the Bluegrass State’s basketball powerhouses, Kentucky and Louisville. It’s even more improbable considering Morant wasn’t even on Murray State’s recruiting radar initially.

The school discovered Morant by accident in 2016 during a summer AAU camp in Spartanburg, South Carolina.

He was playing 3-on-3 in an auxiliary gym when then-Racers assistant James Kane — who was there to scout guard Tevin Brown — went searching for a concession stand. He heard balls bouncing and peeked inside the gym for a look and saw Morant dominating the game.

Morant was a late roster addition and not listed, but Kane came away enamored with him and made a hard pitch for the guard.

“It got to the point where it was overwhelming to Ja and they were … calling daily,” the elder Morant recalled. “Coach Kane would call me and be like, ’tell your son to answer his phone or call me or text me or something. They were persistent.”

“I knew Ja was going to be a special player,” Murray State coach Matt McMahon said. “Probably didn’t know it would happen this quick, but he’s an elite talent. Add to that his ability to make everyone around him better and the fact that he’s a hard worker who’s a winner, that sets up to have this once-in-a-lifetime type player.”

Morant is among the top 15 finalists for the Wooden Award, which goes to college basketball’s top men’s and women’s player, and in the top 10 for the Bob Cousy Award for the nation’s top point guard.

He could be Murray State’s highest NBA draft selection, and would follow Racer standouts Cameron Payne (first-round, 2015) and Isaiah Canaan (second, 2013) into the NBA.