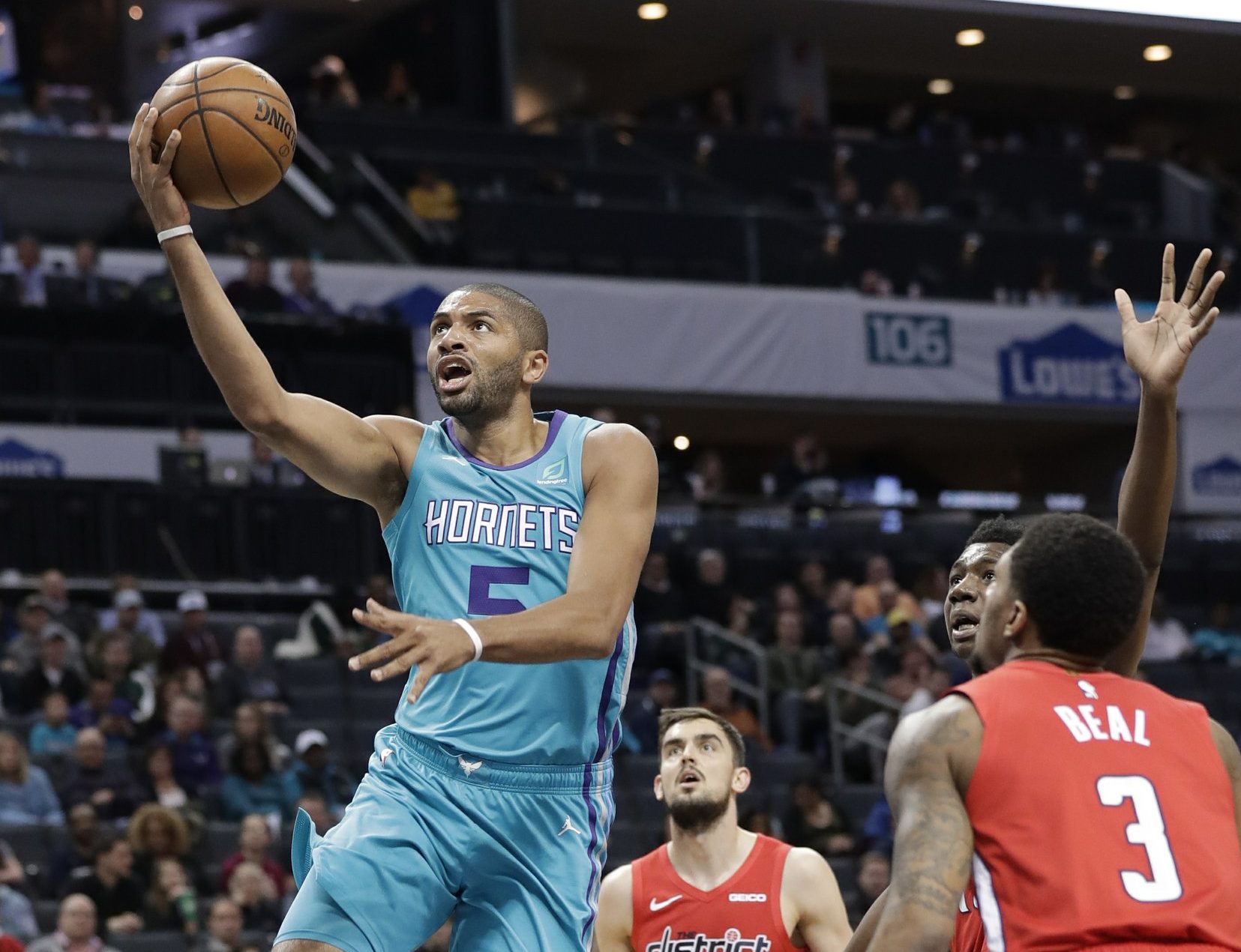 CHARLOTTE, N.C. — Nic Batum is back in his comfort zone.

The Hornets moved the 10-year NBA veteran back to shooting guard — a position he’s played for the better part of the last seven seasons — and it paid immediate dividends.

Kemba Walker had 27 points and 11 assists in his first outing since the All-Star game, Batum added 20 points — one shy of his season high — and Charlotte beat the Washington Wizards 123-110 Friday night.

“That’s me,” a smiling Batum said of playing shooting guard.

The Hornets overcame a season-high 46 points from Washington’s Bradley Beal to improve to 20-9 at home and pull within two games of .500.

Hornets coach James Borrego made the decision to move Batum to shooting guard on Thursday, opting to replace Jeremy Lamb in the starting lineup with rookie small forward Miles Bridges, giving the team more size. Lamb had started all 54 games he was healthy before the All-Star break. It’s the first time Borrego has deviated from the starting lineup for a reason other than an injury.

Batum responded by shooting 7 of 13 from the field with five 3-pointers, and had eight rebounds after coming into the game averaging just 9.3 points. He was taking heat from home fans who wanted him to produce more, given he is making $24 million per season. He had 17 points by halftime, helping the Hornets outscore the Wizards 38-22 in the second quarter. He mostly played the role of facilitator in the second half.

“He came out aggressive offensively, ignited a lot of our offense in transition,” Borrego said. “He was aggressive with his shot and he defended like he does every night.”

Bridges finished with 14 points on 6-of-9 shooting in his first career start.

He said he was excited to learn the news at practice on Thursday, just five days after participating in the NBA All-Star dunk competition.

“I definitely got a lot of confidence playing on a big stage, or dunking on a big stage, in front of everybody,” Batum said. “Just being around all that talent just gave me extra motivation, I want to be there playing (in the All-Star game) on Sunday someday.”

Lamb wasn’t bad in the sixth-man role, scoring 16 points to hand the Wizards their sixth loss in the last eight games. He said he still wants to be a starter, but added that he’s OK with the move if it means getting into the playoffs.

Beal kept the Wizards in the game until late in the fourth quarter, proving to be a one-man wrecking crew. He finished 16 of 25 from the field and made all 10 of his foul shots.

“I just have to elevate my play, that’s all I know I can do is elevate my play and my leadership to do whatever it takes,” Beal said of trying to help the Wizards turn things around.

Wizards: Beal had 20 points in the first half on 8-of-12 shooting. … Turned the ball over on three straight possessions at midcourt in the second quarter on poor passes.

Beal played 41 minutes on the first night of a back-to-back, which Wizards coach Scott Brooks said he doesn’t like to do. But he thought it was necessary for his team to have a chance to win an important game against a conference foe they’re battling with for a playoff spot.

“We’ve got another game (Saturday) and then we’ve got three days off. We just had a long break,” Brooks said. “So that’s all in consideration, but we need some better all-around play with everybody in the game.”

Borrego said the Hornets want to groom Bridges to guard the opposition’s best offensive player, something he believes the athletic rookie has the talent to do. But it will be a work in progress, as Bridges struggled in the times he tried to cover Beal.

Charlotte took control of the game in the third quarter behind defense from Zeller. Zeller swatted Thomas Bryant’s shot in the paint twice, then raced down court to score a layup in transition to give the Hornets their first double-digit lead at 78-67. Zeller finished with 11 points and nine rebounds.