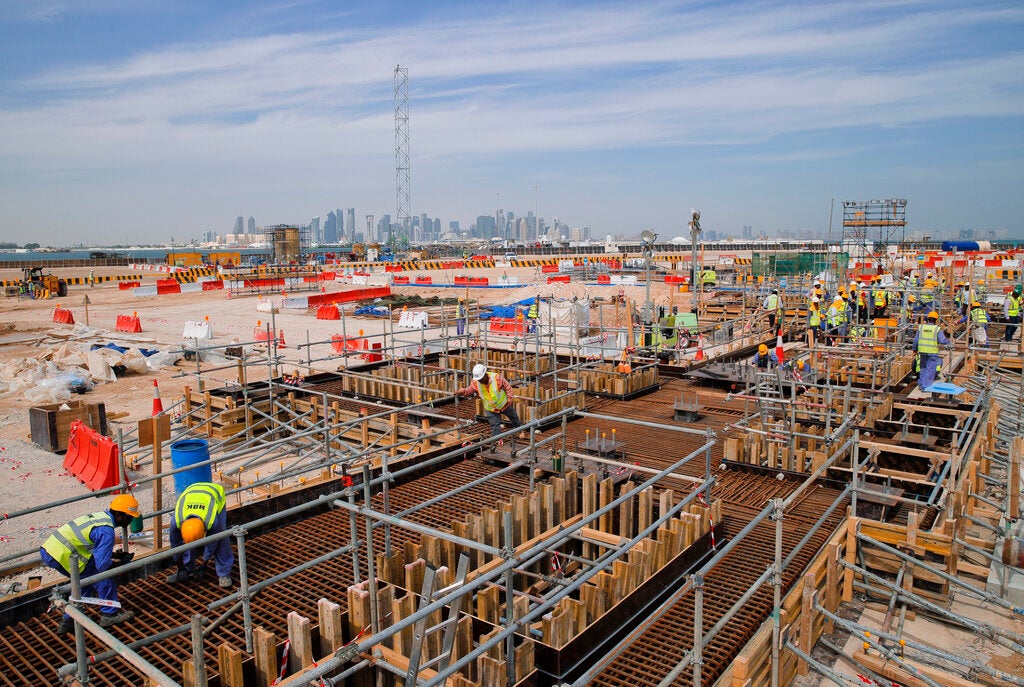 FILE – In this Wednesday, Oct. 31, 2018 file photo, men work on the construction site of the Ras Abu Aboud stadium, backdropped by the city skyline in Doha, Qatar. A FIFA feasibility study concluded the 2022 World Cup can expand to 48 teams by using at least one of Qatar’s neighbors as an additional host, and found there is a low legal risk to changing the format and an additional $400 million in revenue could be generated
The Associated Press obtained a copy of the 81-page report on Monday, March 11, 2019 that assesses the political, logistical and legal issues surrounding adding 16 teams _ a significant change to the format more than eight years after Qatar won the hosting rights. (AP Photo/Vadim Ghirda, File)

LONDON — Persian Gulf countries would have to lift boycotts of Qatar before being eligible to join hosting of the World Cup, FIFA determined in a feasibility study recommending its ruling council endorse expansion of the 2022 tournament to 48 teams despite the logistical and political complexities.

The 81-page study seen by The Associated Press says Qatar would not be forced to share games with Bahrain, Saudi Arabia or the United Arab Emirates unless those countries restore diplomatic and travel ties with Doha. Because of their neutrality in the situation, Kuwait and Oman are the most viable options identified by FIFA to host games in ’22. Venues in at least one more country would be required to cope with the additional 16 teams and 16 games under the expansion proposal.

The feasibility report was prepared for FIFA’s ruling council to consider ahead of a meeting in Miami on Friday, when the leadership will seek approval to press ahead with finalizing plans for adding another 16 teams.

Making the 2022 tournament the first 48-country World Cup, at this late stage, would require Qatar to accept giving up exclusivity on hosting the event more than eight years after its winning bid.

But to protect itself legally, FIFA says that any alteration to the tournament plans “shall be agreed together with Qatar as the appointed host nation, and any new proposals must be prepared jointly between FIFA and Qatar.”

With logistics already challenged by the existing plan to play 64 games in eight stadiums within a 30-mile radius in Qatar, FIFA said two to four additional venues are required in the region in “one or more” nation. The FIFA study identified stadiums in five countries, of which Bahrain, Saudi Arabia and the UAE are currently unviable because they severed travel ties with Qatar in 2017 over accusations Doha supports extremism. Qatar denies the claims.

“Due to the geopolitical situation in the region and the recent blockade that Bahrain, Egypt, Saudi Arabia, the UAE have imposed on Qatar, the involvement of such countries in organizing a co-hosted tournament with Qatar would require the lifting of such blockade, in particular the lifting of all restrictions relating to the movement of people and goods between these countries,” the FIFA feasibility study said. “Ideally, this should be evidenced as a precondition to the appointment of such co-hosts and should cover all aspects related to the FIFA World Cup Qatar 2022.”

Two other potential co-hosts — Kuwait and Oman — are more feasible because they are not part of the boycott. Qatar’s national football team used the countries as stopovers to get its team to the Asian Cup in the UAE in January because direct travel is prohibited.

“Candidate co-hosts would need to be regarded as sufficiently cooperative,” the FIFA study adds. “Such co-hosts would not sanction or boycott economically or otherwise any other potential co-host country.”

A document sent to the FIFA Council says its members will be asked if they agree with the report’s conclusion that World Cup expansion is “feasible provided that neighboring countries host some matches.” FIFA emphasizes that would still keep Qatar as the main host.

The council will also be asked to allow FIFA and Qatar to jointly submit a proposal on using “one or more additional co-host countries” and that the congress of member associations has the final say on expansion in June.

That would come almost nine years after the vote that Qatar’s unexpected vote success. That bidding process has been subject to corruption investigations which questioned Qatar’s conduct in lobbying voters but concluded there was no misconduct. Qatar has also been forced to raise standards of working conditions and improve labor rights protections after significant outside scrutiny. Any additional host nation in 2022 would have to provide guarantees on human rights requirements, the FIFA study says.

The World Cup already has been shifted from its usual June-July slot because of Qatar’s searing summer heat, despite resistance from European leagues whose season will be disrupted.

Spreading hosting beyond Qatar would also change the nature of what has been promoted as a compact World Cup that doesn’t require fans to take flights between matches.

The FIFA study found that the enlarged tournament could still be played in a 28-day window from Nov. 21-Dec. 18. FIFA said there would be “no major concessions to the sporting quality of the tournament” with expansion. While there were a maximum of four matches per day in the closing stages of the 2018 World Cup in Russia, FIFA said the 2022 tournament could feature six separate kickoff slots in the earlier stage to cope with the additional teams.

The FIFA Congress has already agreed to expand to a 48-team tournament from the 2026 World Cup in the United States, Mexico and Canada. The same format is proposed, starting with a group stage consisting of 16 groups of three teams, followed by a round of 32. That would ensure a team could only play a maximum of seven matches at the tournament — like in the 32-team format.

The study also breaks down how FIFA can earn an additional $400 million by adding more games. FIFA said while it cannot rule out legal action from losing bidders by changing the format, the study said it “concluded that the risk was low.”

Read Next
ONE: Amid losing streak, Jomary Torres vows to regain focus
EDITORS' PICK
China’s Xi unwilling to accept vaccines despite threat from protests — US intel
Easterlies to bring rain in PH on Sunday — Pagasa
Complete your early Christmas shopping with vivo V25 Series
What’s in a name? ‘Maharlika’ evokes time of mythmaking
The vivo Y16 makes the season of giving more thoughtful for the whole family
House energy committee chair Arroyo bats for cheap electricity
MOST READ
What’s in a name? ‘Maharlika’ evokes time of mythmaking
Maxene Magalona sees separation from Rob Mananquil as ‘blessing in disguise’: ‘There’s no more anger’
Are we ready for a sovereign wealth fund?
Bea Alonzo welcomes holiday season with new look
Don't miss out on the latest news and information.