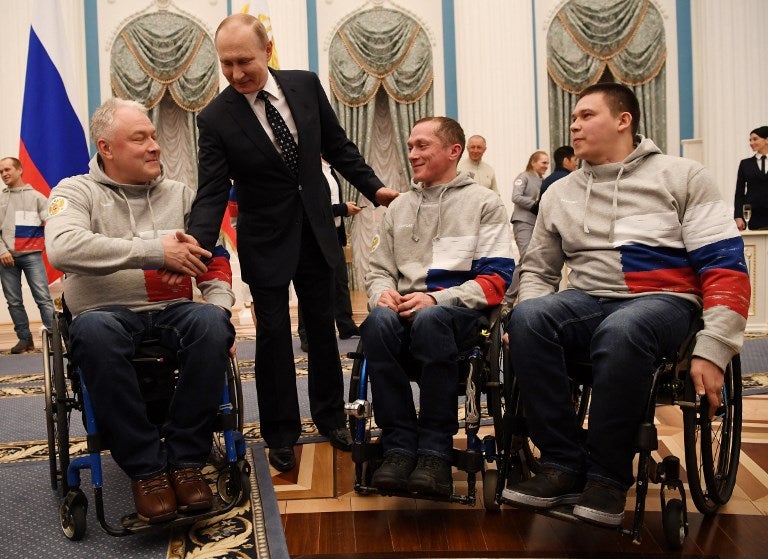 Russian President Vladimir Putin (2ndL) speaks with medalists of the 2018 Pyeongchang Winter Paralympic Games after an awarding ceremony at the Kremlin in Moscow on March 20, 2018. (Photo by Yuri KADOBNOV / POOL / AFP)

MOSCOW — Russia returned to the Paralympics on Friday, though athletes face extra drug tests ahead of next year’s games in Tokyo.

The International Paralympic Committee formally lifted Russia’s suspension on Friday after 2 1/2 years, but set a probation period through 2022.

Conditions include extra drug testing before competitions — with Russia footing the bill — and a ban on government officials serving on the Russian Paralympic Committee.

“We are looking forward to welcoming the RPC back as an IPC member,” IPC president Andrew Parsons said. “The organization should be under no illusions, however, that should it at any stage not meet the post-reinstatement criteria, the IPC governing board can reconsider its membership status. This could include the IPC revoking the conditional reinstatement.”

Russia faces a total bill of more than $1 million, including $125,000 a year for extra drug testing in 2020, 2021 and 2022. Athletes in all but one of 27 Paralympic sports will need to show they’ve been drug-tested in the six months before entering key IPC events, including Paralympic qualifiers. Powerlifting is rated the highest-risk sport, with three prior tests required.

Russia was barred from the 2016 Paralympics in Rio de Janeiro after the IPC found a “medals over morals mentality” led to widespread cheating.

However, 30 athletes from the country were allowed to enter as Neutral Paralympic Athletes for last year’s Winter Paralympics in Pyeongchang, South Korea.

The IPC ruled in January that Russia had reformed enough to lift the ban, but only after dropping its demand for Russian authorities to admit earlier doping-related wrongdoing.

At the time, Parsons said there was a stalemate because Russia would “most probably never accept” a report by World Anti-Doping Agency investigator Richard McLaren. He found in 2016 there was widespread doping involving a cover-up by Sports Ministry officials.

Documents from Moscow’s anti-doping lab revealed in McLaren’s 2016 investigation showed that failed doping tests were covered up for athletes across numerous sports, including some with disabilities.

Athletics is the only sport still with a doping ban on Russia’s team, though it allows dozens of certified Russians to compete as neutral athletes.