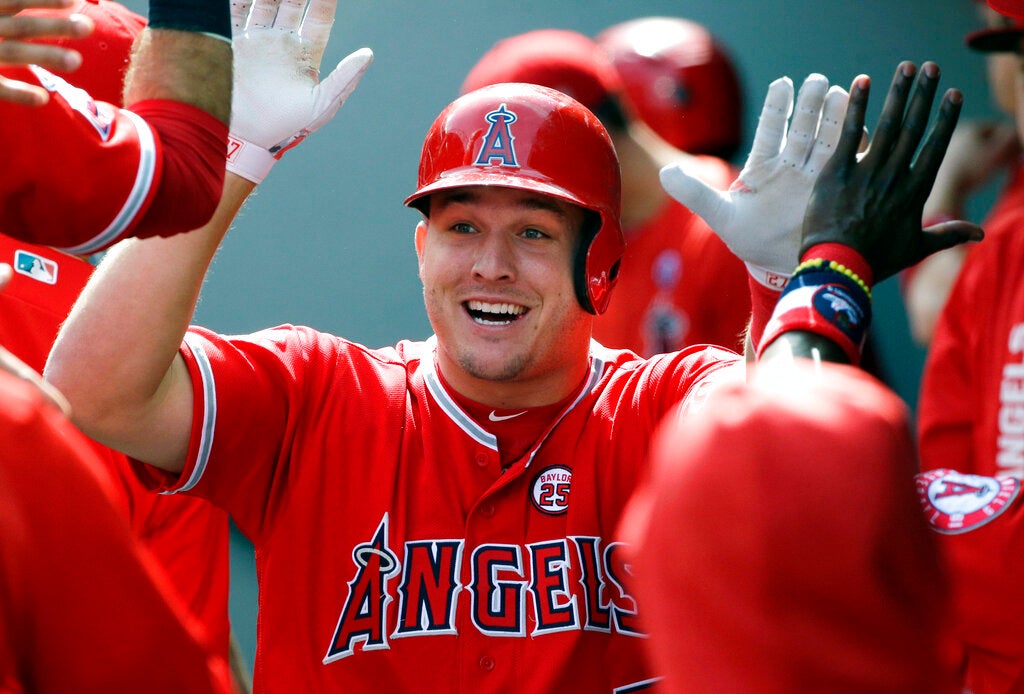 FILE – In this Sept. 10, 2017, file photo, Los Angeles Angels’ Mike Trout is greeted in the dugout after hitting a solo home run in the first inning of a baseball game against the Seattle Mariners in Seattle. A person familiar with the negotiations tells The Associated Press Tuesday, March 19, 2019, that Trout and the Angels are close to finalizing a record $432 million, 12-year contract that would shatter the record for the largest deal in North American sports history. (AP Photo/Ted S. Warren, File)

Mike Trout is about to cash in.

Trout and the Los Angeles Angels are close to finalizing a $432 million, 12-year contract that would shatter the record for the largest deal in North American sports history, a person familiar with the negotiations told The Associated Press.

The deal was disclosed Tuesday by a person familiar with the negotiations who spoke to the AP on condition of anonymity because the agreement had not been finalized. The contract was likely to be announced by the end of this week, the person said.

Hours later, news broke that Alex Bregman and the Houston Astros have agreed on a $100 million, six-year deal that keeps the All-Star third baseman under contract with the team through 2024, according to a person with direct knowledge of the situation.

Trout would set a baseball record for career earnings at about $513 million, surpassing the roughly $448 million Alex Rodriguez took in with Seattle, Texas and the New York Yankees from 1994-2017.

Progress toward an agreement was first reported by ESPN.

Whether Trout’s contract is the largest in the world for a team athlete is difficult to determine. Forbes estimated Lionel Messi earned $84 million from Barcelona in 2017-18 and Cristiano Ronaldo $61 million from Real Madrid, but precise details of their contracts are not known.

A 27-year-old entering what should be his prime years, Trout is considered baseball’s top player and would have been coveted as a free agent after the 2020 season. He lives in southern New Jersey, and Harper said he was excited about trying to recruit Trout to join him in Philadelphia.

Although Trout recently built a home in his native New Jersey, he is staying on the West Coast with the Angels, who are coming off three straight losing seasons and haven’t won a playoff game during his career.

Trout and wife Jessica have made no secret of how much they enjoy living in laid-back Southern California, and the low-key outfielder apparently decided to skip the pressure of free agency entirely.

Trout has been an All-Star in each of his seven full big league seasons and hit .312 with 39 homers, 79 RBIs, 24 steals and 122 walks last year. He has led the major leagues in OPS in each of the last two seasons.

Bregman’s agreement includes this season, buys out three years of arbitration eligibility (2020-22) and pushes back his opportunity to become a free agent by two years.

The person who spoke about that deal did so on condition of anonymity because details had not been released by the team. The agreement was first reported by KRIV-FOX 26.

The 24-year-old Bregman made his first All-Star team last season and was selected MVP of the game after hitting a home run to help the American League win. He set career highs with a .286 batting average, 31 homers, 103 RBIs and a major league-leading 51 doubles, finishing fifth in AL MVP balloting.

The second overall pick in the 2015 amateur draft out of LSU, Bregman has hit .282 with 58 homers and 208 RBIs in 2½ seasons with the Astros, helping them win consecutive AL West titles and the 2017 World Series. He was limited early this spring after having arthroscopic surgery on his right elbow in January.

MORE FROM AROUND SPRING TRAINING

Yankees general manager Brian Cashman announced that setup man Dellin Betances will begin the season on the injured list due to right shoulder inflammation. Betances got an MRI after he continued to lack velocity with his fastball.

Cashman also announced that starting pitcher Gio Gonzalez had passed his physical. If added to the 40-man roster, the 33-year-old left-hander would get a $3 million salary while in the major leagues and the chance to earn $9 million in performance bonuses: $300,000 for each start through 30.

Tampa Bay’s Tyler Glasnow struggled in his fourth start. The right-hander issued four walks in 3 2/3 innings and was charged with five runs, sending his spring ERA to 11.00.

The Tigers also announced that right-hander Michael Fulmer may need Tommy John surgery. The operation was recommended following an MRI exam and a second opinion from Dr. James Andrews.

Fulmer, who experienced elbow soreness during a recent bullpen session, will seek a third opinion.

Yu Darvish made his fourth start for Chicago’s split squad, pitching 4 2/3 innings against a team of Mariners minor leaguers and allowing two runs — one earned — and five hits, striking out six and walking two. Darvish also had an RBI single. Ian Happ and Jason Heyward had RBI doubles and Wilson Contreras singled in a run.

Kyle Lewis, Seattle’s No. 1 pick in the 2016 draft, hit his third home run — a solo shot off reliever Carl Edwards Jr. — and his third double, scoring twice and raising his average to .429.

Shane Bieber struck out six in five innings for Cleveland. He permitted five hits and walked none. Dodgers newcomers A.J. Pollock and Russell Martin homered off Bieber. Pollock also had a double.

Walker Buehler threw 46 pitches over 2 2/3 innings in his long-awaited Cactus League debut for Los Angeles. He allowed three hits and one earned run. The young right-hander was slowed by shoulder soreness earlier this spring.

Eric Hosmer homered and Bryan Mitchell struck out four over two scoreless innings to close it out. Manny Machado went 1 for 4 and is batting .161.

Adam Jones was 0 for 3 in his Cactus League debut for Arizona. He batted leadoff and played five innings in center field.