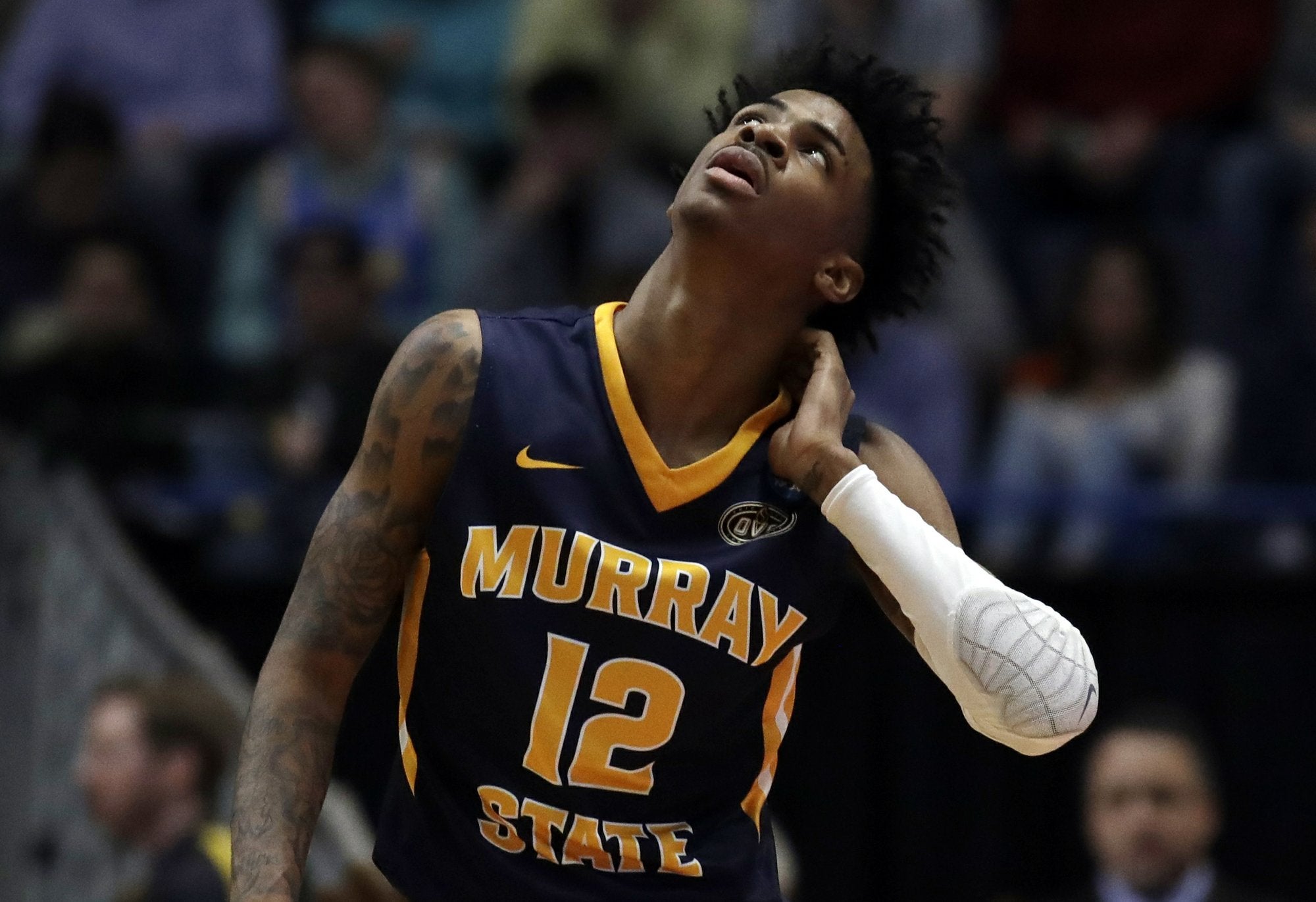 Murray State’s Ja Morant (12) looks up at the scoreboard during the first half of a second round men’s college basketball game against Florida State in the NCAA Tournament, Saturday, March 23, 2019, in Hartford, Conn. (AP Photo/Elise Amendola)

Their exits leave the Sweet 16 searching for a Cinderella.

The lowest-seeded team to reach a regional semifinal Saturday was No 5 seed Auburn, which routed Kansas, a No. 4. That should change Sunday as five double-digit seeds are in action, though they don’t consider themselves long shots.

“We’re a 31-5 team that’s played against high-level competition all year, and we’ve had great road victories throughout the season,” UC Irvine guard Robert Cartwright said. “And we don’t see ourselves that way (as a Cinderella). But we understand that might come with our seeding, but we look at ourselves as a high-level team that can compete with pretty much anybody.”

At least one double-digit seed will get to the Sweet 16 because Cartwright’s 13th-seeded Anteaters face No. 12 seed Oregon in a South Region matchup Sunday in San Jose, California.

Oregon hardly fits a Cinderella profile as a Pac-12 program, even though it needed to win its conference tournament just to crack the 68-team field. Big West champion UC Irvine is a more natural fit; the Big West champion won its first NCAA Tournament game Friday and has even embraced the approach Loyola-Chicago took last year by labeling an assistant coach as its version of Sister Jean Delores Schmidt.

UC Irvine will try to accomplish what Wofford and Murray State failed to do.

Wofford’s 21-game winning streak ended as the Southern Conference champions fell 62-56 to Kentucky. Magee, the NCAA career leader for 3-point baskets, missed all 12 of his attempts from beyond the arc.

“It’s incredibly disappointing,” Magee said. “I feel like if I make three of those shots, we win the game. You know, a lot of them were good shots, and just — they didn’t go in.”

Morant kept Murray State close for the first 10 minutes or so before No. 4 seed Florida State blew out the 12th-seeded Racers 90-62 in a West Region second-round game.

“I was just hurt not being able to take the floor with these guys for the rest of this season, for another game, or possibly two, three, four,” Morant said. “But it’s been a great season. I really was just thinking back on what all we have accomplished this year.”

Even before Saturday’s action, the lowest-seeded team left in the tournament was UC Irvine.

The Anteaters have won 17 straight games and earned their first NCAA Tournament victory in school history Friday with a 70-64 triumph over Kansas State.

“I look at their ballclub, and it reminds me of some of our good Creighton teams back when we were in the (Missouri) Valley (Conference),” said Oregon coach Dana Altman, who coached Creighton from 1994-2010. “We never thought of ourselves as Cinderellas or underdogs, and I’m sure they don’t either. So they don’t think of themselves as Cinderella, and I sure don’t.”

Another potential Sweet 16 upstart is Liberty, the No. 12 seed in the East Region.

Liberty rallied from 10 points down in the second half Friday to beat Mississippi State80-76 for its first NCAA Tournament victory. The Flames faces No. 4 seed Virginia Tech on Sunday at San Jose.

“We’re not getting too ahead of ourselves,” Liberty forward Myo Baxter-Bell said. “We don’t really look at the numbers. I think seeds don’t matter. I think it’s been proven that the numbers really don’t matter. At the end of the day, we all have to go out there and lace up.”

Ohio State, seeded 11th in the Midwest region, takes on No. 3 seed Houston in Tulsa, Oklahoma. Iowa is seeded 10th in the Midwest and seeks its first regional semifinal berth in two decades when it faces No. 2 seed Tennessee.

Although neither team is a double-digit seed, it still would be quite a development if Buffalo gets to the Sweet 16 out of the Mid-American Conference or Central Florida gets there in its first NCAA Tournament appearance since 2005.

So there are still many opportunities for Cinderella stories, even if the teams involved might not care for that description.

“That’s the great thing about this tournament,” UC Irvine coach Russell Turner said Saturday. “You get to settle it in a rectangle. And what your seed is doesn’t matter. You play for it. And that’s what we’ll get a chance to do tomorrow. So if they call us Cinderella, that’s fine. But I think we’ve earned everybody’s respect, whatever they call us.”