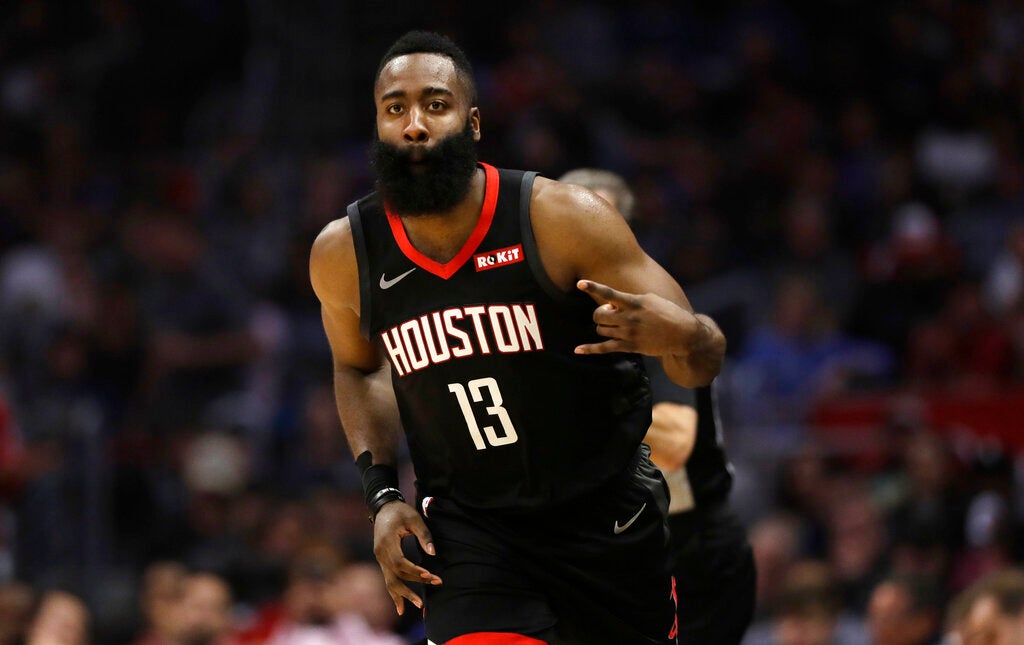 Houston Rockets’ James Harden (13) reacts after making a 3-point basket against the Los Angeles Clippers during the first half of an NBA basketball game Wednesday, April 3, 2019, in Los Angeles. (AP Photo/Marcio Jose Sanchez)

LOS ANGELES  — The NBA playoffs are still days away. Tell that to the Houston Rockets, who have their postseason mentality locked in.

“(Chris) is dialed in, and James, too,” Rockets coach Mike D’Antoni said. “When they play like that, it’s pretty tough to lose. We played unbelievably.”

Clint Capela had 24 points and 15 rebounds to help the Rockets win their fourth in a row. They showed little fatigue in cruising past the NBA’s hottest team while playing their last back-to-back of the season.

The Rockets currently own the third seed in the Western Conference and the Clippers are sixth, which would pair them in the first round.

Asked how the Clippers would match up, coach Doc Rivers said, “If we go by tonight, not very well. But we’re a much better team than we showed.”

Paul stunned the crowd by hitting a deep 3-pointer that beat the buzzer to end the third, in which the Rockets outscored the Clippers 34-20.

Rookie Shai Gilgeous-Alexander led the Clippers with 20 points and Danilo Gallinari added 16. They had won an NBA-best 13 of 15 coming in, but lost for the first time in three meetings with Houston this season.

“Every once in a while, you get the (expletive) kicked out of you,” said Lou Williams, who had 14 points off the bench. “We hadn’t had one of these in three, four months, so we were due.”

The Rockets set the tone early, shooting 64% in the first quarter.

Houston stretched its lead to 22 in the second before the Clippers closed on a 9-2 run to trail 68-53 at halftime.

“We only got, what, three more games now? Four? To get ready for the great grind of the playoffs,” Paul said. “Everybody’s just trying to get going.”

Rockets: They had lost eight of their last 13 against the Clippers at Staples Center. … They improved to 8-4 in the second game of a back-to-back. … The game reunited G Austin Rivers with his father Doc. The younger Rivers is averaging 8.2 points off the bench since signing as a free agent at Christmas.

Clippers: G Patrick Beverley (right hip pointer) rested. … The teams played for the first time since late October. The Clippers won the first two meetings, but several players from both teams either didn’t play in those games or were later traded. … Clipper Darrell razzed Paul in his first trip to the free throw line. After making both, Paul tapped his chest and nodded in Darrell’s direction. … Rapper Ty Dolla $ign sat courtside with a small dog in his lap.

Harden is one of several athletes mourning the shooting death of rapper Nipsey Hussle in Los Angeles on Sunday.

“He was powerful. Not just to a certain dynamic or a certain city, but just to the world,” Harden said. “He was a leader. He was so many things. His life got taken away off nonsense, off B.S. It’s just been sad. Not only myself but a lot of people around this world is affected by it. It just doesn’t seem real.”