No. 1 Bucks: Milwaukee clinches top spot in the NBA 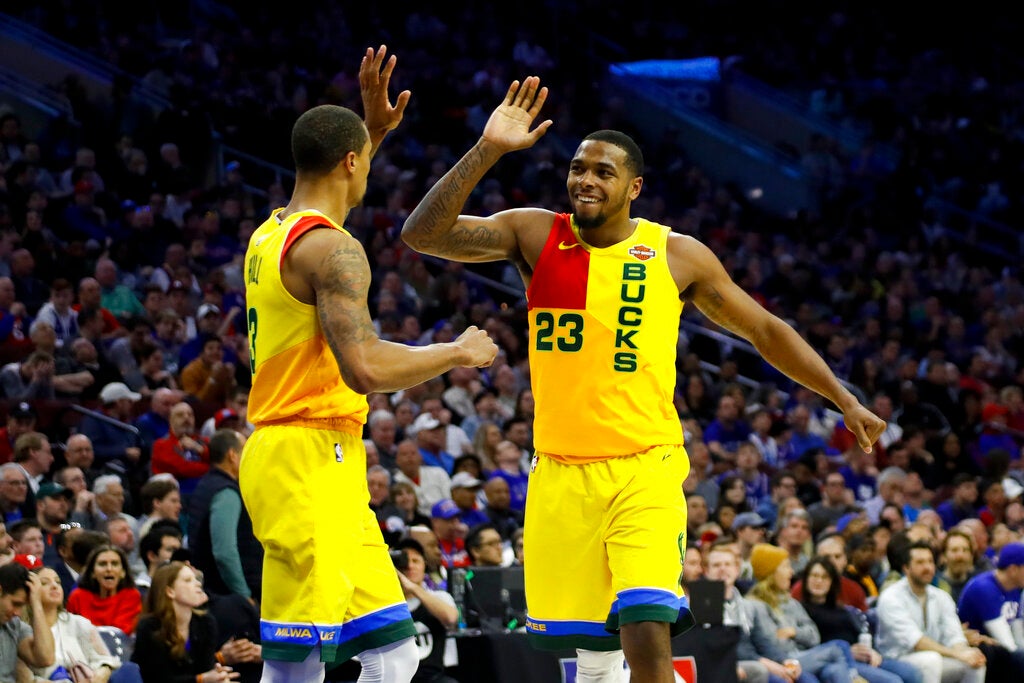 A look at where things stand in the NBA playoff picture, with six days remaining in the regular season:

The road to the NBA Finals goes through Milwaukee. And the Bucks are the first team in the league to know exactly where they will be seeded for the playoffs.

Milwaukee’s win over Philadelphia on Thursday night clinched the No. 1 seed in the Eastern Conference playoffs, and ensured that the Bucks will have home-court advantage for the entirety of the playoffs. It doesn’t guarantee anything, of course, but the No. 1 seed has made the East finals in 16 of the last 19 seasons.

“It’s not just about Game 7. It’s about having the first two games at home,” Milwaukee coach Mike Budenholzer said. “Our guys have worked hard this year to earn that, but it doesn’t mean a whole lot at the end of the day when the playoffs start.”

No other seeds are clinched. Philadelphia will almost certainly be No. 3, but that’s not secure.

It could play a role in which teams get the last three open spots. Milwaukee plays Brooklyn on Saturday, a big game for the Nets and meaningless for the Bucks. Toronto plays Miami on Sunday, big for the Heat, and perhaps meaningless for the Raptors. If Philadelphia has the No. 3 seed clinched by Tuesday, that could help the Heat out in Dwyane Wade’s last home game.

Golden State’s easy win over the Los Angeles Lakers put the defending NBA champions two games ahead of Denver in the race for the No. 1 seed in the Western Conference playoffs.

Still, no seeds out West are clinched. Denver and Houston are vying for No. 2 — mathematically, there are other options, such as Portland getting past both of them for that spot, but in most scenarios the Nuggets and Rockets will be the ones fighting it out. San Antonio could get as high as sixth, but will likely be seventh or eighth.

Plenty of games Friday will affect the West race, with the Portland-Denver matchup likely carrying the most weight on the night’s schedule.

There are 11 games on Friday’s schedule with playoff implications.

— Toronto at Charlotte: It’s almost win-out-or-bust now for the Hornets. For the Raptors, it’s get ready to host the No. 7 seed in Game 1.

— Atlanta at Orlando: The Magic play their final home regular-season game. A win would help the odds that this isn’t the season home finale.

— San Antonio at Washington: Spurs know they’ll start the playoffs on the road. Getting out of eighth likely avoids seeing the Warriors right away.

— Boston at Indiana: Winner will hold a one-game lead in the race for the No. 4 spot in the East with two games left. The loser goes to No. 5.

— New York at Houston: The Rockets could become the first team since Phoenix (in February 2009) to score 130 in three consecutive games.

— Miami at Minnesota: It’s not a must-win for the Heat, but close. When Dwyane Wade plays, Miami has won seven straight at Minnesota.

— Detroit at Oklahoma City: Pistons are fighting to get in and waiting for Blake Griffin to return, while the Thunder have lost seven of 10.

— Portland at Denver: This is the start of a home-and-home that will have a big impact on seeding. Nuggets’ recent schedule has been brutal.

— Cleveland at Golden State: Technically, it’s a rematch of the last four NBA Finals. Cavs could harm Warriors’ plans for West No. 1 seed.

— Games with no playoff implications: Memphis at Dallas, New Orleans at Phoenix.

NOTE OF THE DAY

The Bucks have not won a playoff series since 2001, the longest current drought in the NBA. They have lost nine consecutive series.

QUOTE OF THE DAY

“We’ve got to make sure we take full advantage of the opportunity, take care of business and do what we’re supposed to do.” — Houston’s James Harden, the reigning NBA MVP, on the Rockets’ next two games against lottery-bound New York and Phoenix.