MANILA, Philippines—The Final Four spots are down to three.

Ateneo officially clinched its place in the big dance leaving defending champion De La Salle, University of Santo Tomas, Far Eastern University, and University of the Philippines fighting for the remaining spots in the semifinals.

The Lady Spikers are in second after Week 8 with an 8-3 record, two games behind the Lady Eagles, while the Golden Tigresses and the Lady Tamaraws are squeezed in the third spot with 7-4 records.

The Lady Maroons have the toughest bind out of all the remaining Final Four contenders with their 6-5 record putting them at the fifth spot.

National University was officially eliminated from the race after falling to a 3-8 record while University of the East, 2-9, and Adamson University, 1-10, languish at the bottom of the ladder.

With the team scenarios out of the way, here are the seven best players that made Week 8 must-watch television. 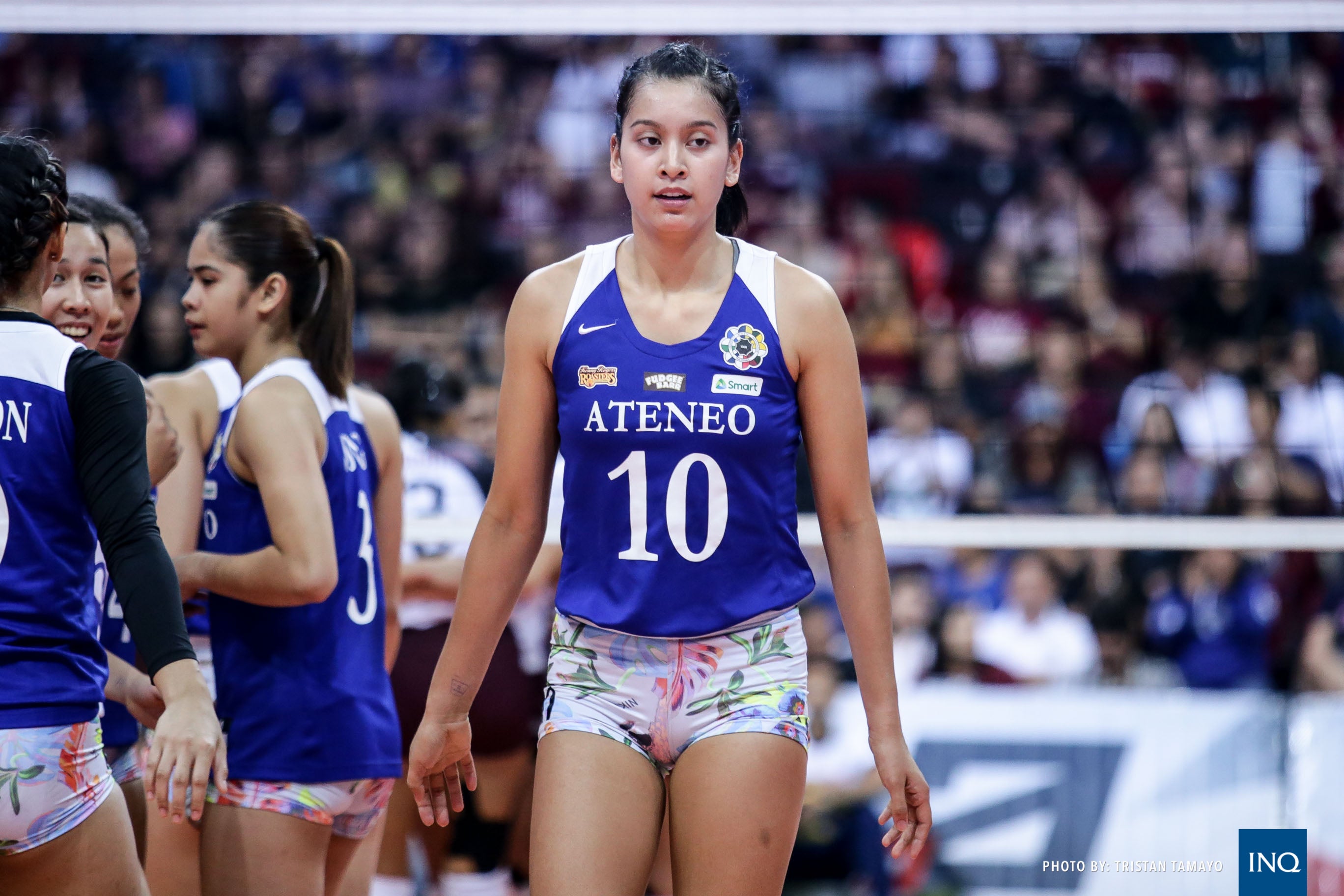 Ateneo’s maddening rush has resulted to 10 straight wins with its lone loss of the tournament against La Salle in the opening weekend, and one focal point of that streak is the steady play of Kat Tolentino.

Tolentino averaged 12 points this week while maintaining her place in the top five of the Best Scorers list with a total of 166 points for the No. 4 spot. Diana Carlos makes a return on this list, not much because of UP’s collective week but through her sheer scoring prowess.

The Lady Maroons split their games this week but Carlos was nonetheless stellar for the no.5 team in the tournament.

Carlos averaged 19 points this week and that was the most by anyone in Week 8.

UP’s captain also ended the week as the No. 3 scorer with a total of 169 points. De La Salle had just one game this week but that lone match helped the Lady Spikers solidify their hold of the second spot in the standings and one person responsible for that outcome was rookie Jolina Dela Cruz.

Dela Cruz was solid for the defending champions with 13 points while also helping on the defensive end with 10 excellent digs.

La Salle’s rookie is also the third-highest scoring opposite in the league, 13th overall, with 115 points behind Kat Tolentino and Adamson’s Eli Soyud. The Golden Tigresses, like the Lady Spikers, played just one game this week and it was a quick one.

Leading the way for the Golden Tigresses was rookie star Eya Laure who’s on track to keep the Rookie of the Year prize.

Laure finished with 14 points to maintain her spot as the second-best scorer in the league with 189 points. 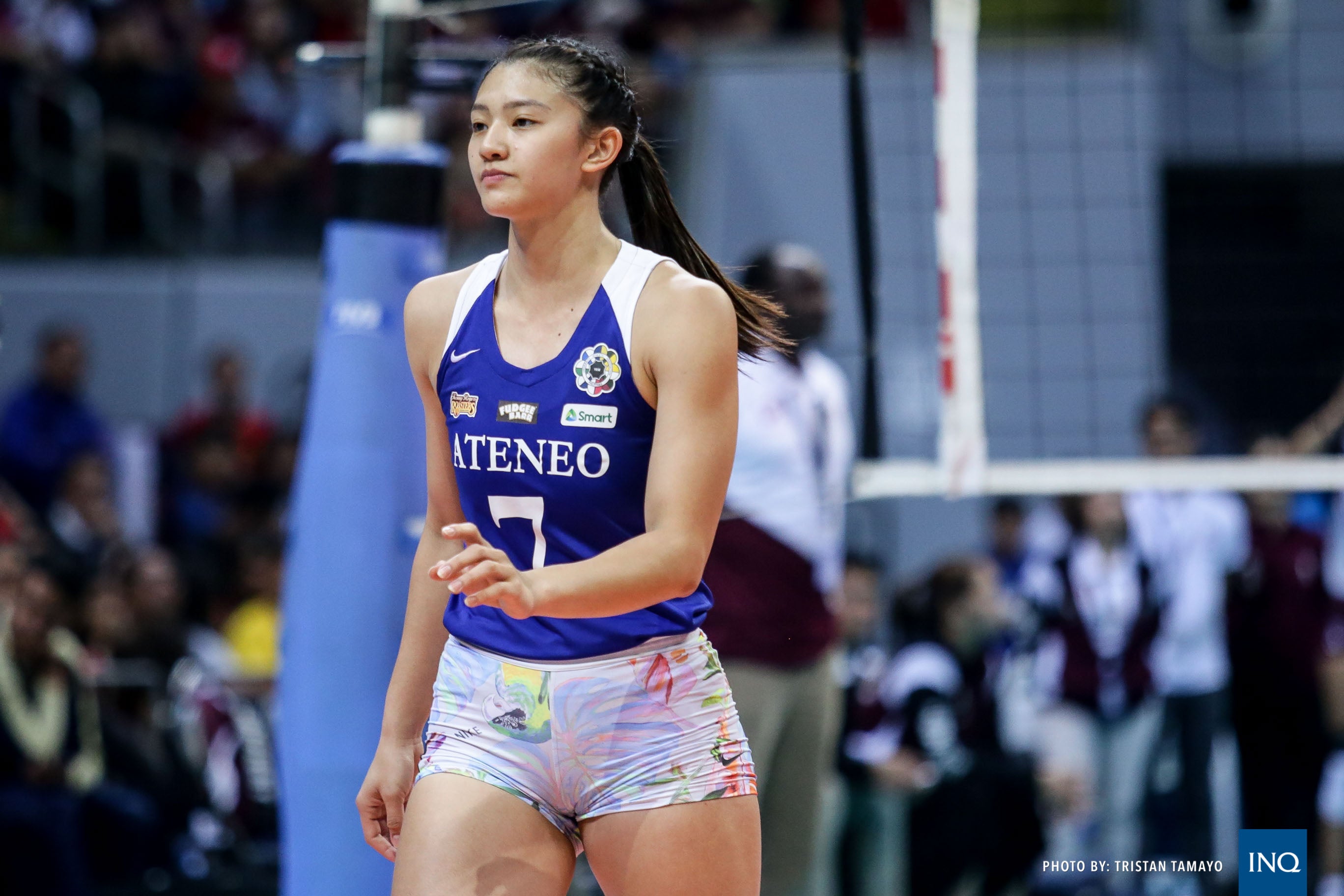 It’s not just Kat Tolentino who has been the stabilizing factor for the Lady Eagles during this long winning streak.

The Lady Eagles’ main force in the middle is looking more impenetrable as the season goes on and she averaged 9.5 points during Ateneo’s perfect run this week.

Madayag is also the league’s leading blocker with a total of 38 kill blocks and an average of 0.9 per set.

In the overall Best Scorers’ table, Madayag is the highest-scoring middle blocker with 134 points. The Lady Tamaraws went 1-1 this week but Heather Guino-o still deserves some praise.

FEU has been undermanned since rookie star Lycha Ebon went down with an injury in Week 6 and Guino-o dutifully stepped up her game in the Lady Tamaraws’ two games this week. UP needed someone to step up from its ranks when star hitter Isa Molde suffered an ankle injury on March 31.

Fortunately for the Lady Maroons, veteran Marian Buitre was there.