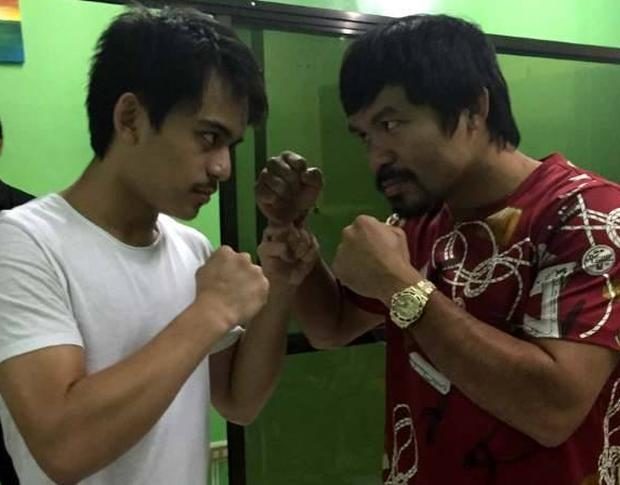 FILE – Manny Pacquiao poses with his eldest son Jimwell in this photo posted on the boxing champ’s Facebook timeline on Aug. 16, 2015.

MANILA, Philippines — Senator and boxing icon Manny Pacquiao may not have seen his son, Jimuel, fight his debut boxing match live, but that did not take away his nervousness during the bout.

The 18-year-old Jimuel showed no signs of amateur jitters and only needed two rounds and a one-two combination to knock out his 26-year-old opponent Miguel Egan in their charity match at Amoranto Sports Complex in Quezon City on Saturday.

Following the match, Pacquiao proudly shared a clip of his son’s match to his fans.

This was Pacquiao’s son’s first ever amateur match in the ring, which made the eight-division boxing champion jumpy at first.

[We were nervous even though we only watched on video.]

Pacquiao’s wife, Jinkee, was no short of nerves as well — proven by a video clip of the match she shared on her Instagram stories captioned, “My son’s first amateur fight! Makuyapan ko!”

[My son’s first amateur fight! I am going to faint!]

Pacquiao said Jinkee refused to watch the match at first, to the extent of crying.

All the nerves were worth it at the end of the day, as Jimuel was able to bag the win.

His brother, Michael, also shared a clip of the match on his Instagram account, proclaiming how proud he is of his brother.

“Proud of you my bro! Congratulations!” Michael said.

Jimuel had been training long before his debut match.

In a video previously shared by Pacquiao on Instagram, the boxing icon called his son “the future.”

The video shows Jimuel training with his father, copying his father’s speed, which the boxing champion has been known for.

Pacquiao said that both he and Jinkee initially did not want Jimuel to pursue boxing, but due to their son’s determination, they eventually allowed him to fight.

[We did not want him to enter the boxing scene. But he insisted, so we eventually allowed him to fight.]

Asked if this will be a long-term career for Jimuel, the boxing champion said: “Gusto niya talagang mag-boxing.”

[He really wants to pursue boxing.]/ac