Steve Kerr rips Warriors after Game 5 loss: ‘We seemed to take it for granted’ 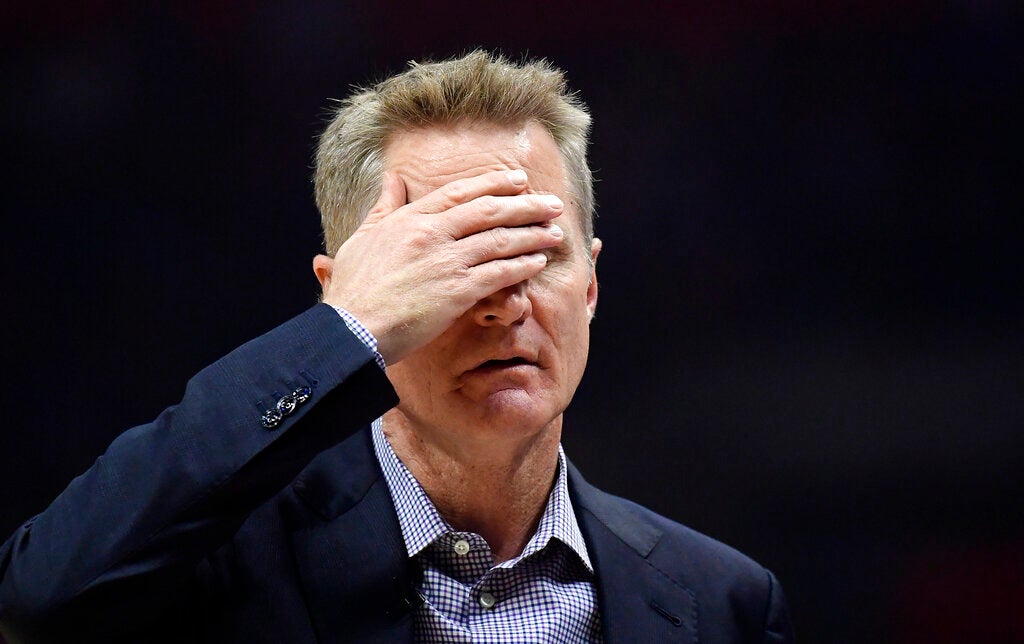 Golden State Warriors head coach Steve Kerr accused his team of taking victory for granted on Wednesday as the NBA champions slumped to an upset 129-121 playoff defeat to the Los Angeles Clippers.

The Warriors had looked set to advance into a Western Conference semi-final showdown with Houston, needing only a victory on home turf against the eighth-seeded Clippers to complete a 4-1 series victory.

But a 45-point display from Kevin Durant could not mask a shoddy Warriors defensive performance which the Clippers exploited to claw the series back to 3-2 as the teams head to Los Angeles for game six.

Lou Williams delivered 33 points off the bench for the Clippers while Patrick Beverley hauled down 14 rebounds to craft an upset which left Kerr bemoaning a lacklustre showing from his team.

“It’s been a year where things haven’t gone exactly smoothly all the time so I’m not surprised by anything, but I expected us to come out and play better and win the game,” Kerr told reporters afterwards.

“But it’s the NBA playoffs. It’s a seven-game series and you’ve got to play, and defend with some urgency. We gave up 129 points on our home floor. We weren’t right from the very beginning.

“Everything we did in LA, we didn’t do tonight. We seemed to take it for granted that we were going to be okay. But I said it before the game — this Clipper team has been scrapping and clawing all year.

“I knew they weren’t going to go down without a fight. Patrick Beverley came in and kicked our butts.”

While Kerr and the Warriors reflected on a chastening loss, Clippers head coach Doc Rivers waved off suggestions that his team could go on to eliminate the Warriors, who are chasing a fourth title in five seasons.

“We’re not getting ahead of ourselves. They’re up 3-2 still,” Rivers said. “But I just loved how we played. I thought tonight was more like us, throughout. We kept attacking, we kept running. That was our team out there today.”

As well as Williams and Beverley, three other players made double figures for the Clippers, notably Danilo Gallinari. The Italian veteran finished with 26 points and seven rebounds.

“To beat this team in a game, you need everybody,” Rivers said. “Everybody did their job. Each guy was a star in their role and that’s why we won the game.”

While the Warriors now face at least one more game in their series, Houston will benefit from extra rest after wrapping up a 4-1 series win over the Utah Jazz in Wednesday’s other playoff game.

James Harden led the scoring with 26 points as the Rockets overcame an improved Utah defensive effort to seal a 100-93 victory at Houston’s Toyota Center.

The Rockets were made to work hard for the win however, and had pulled to within four points at 86-90 with 4min 30sec remaining.

But Utah’s Ricky Rubio missed a golden chance to put the Jazz ahead, squandering a wide open three-pointer from the corner to leave Houston 94-93 in front.

The momentum shifted after that error, PJ Tucker adding two free throws to make it 96-93 to Houston. Harden then made a superb steal and drew a foul to earn two free throws that put the Rockets up by five with 38 seconds remaining.

Royce O’Neale led the Utah scoring, finishing with 18 off the bench.

“You’ve got to give them credit for the entire series,” Harden said. “Every game they found a way to compete, especially tonight. They just didn’t let up.”