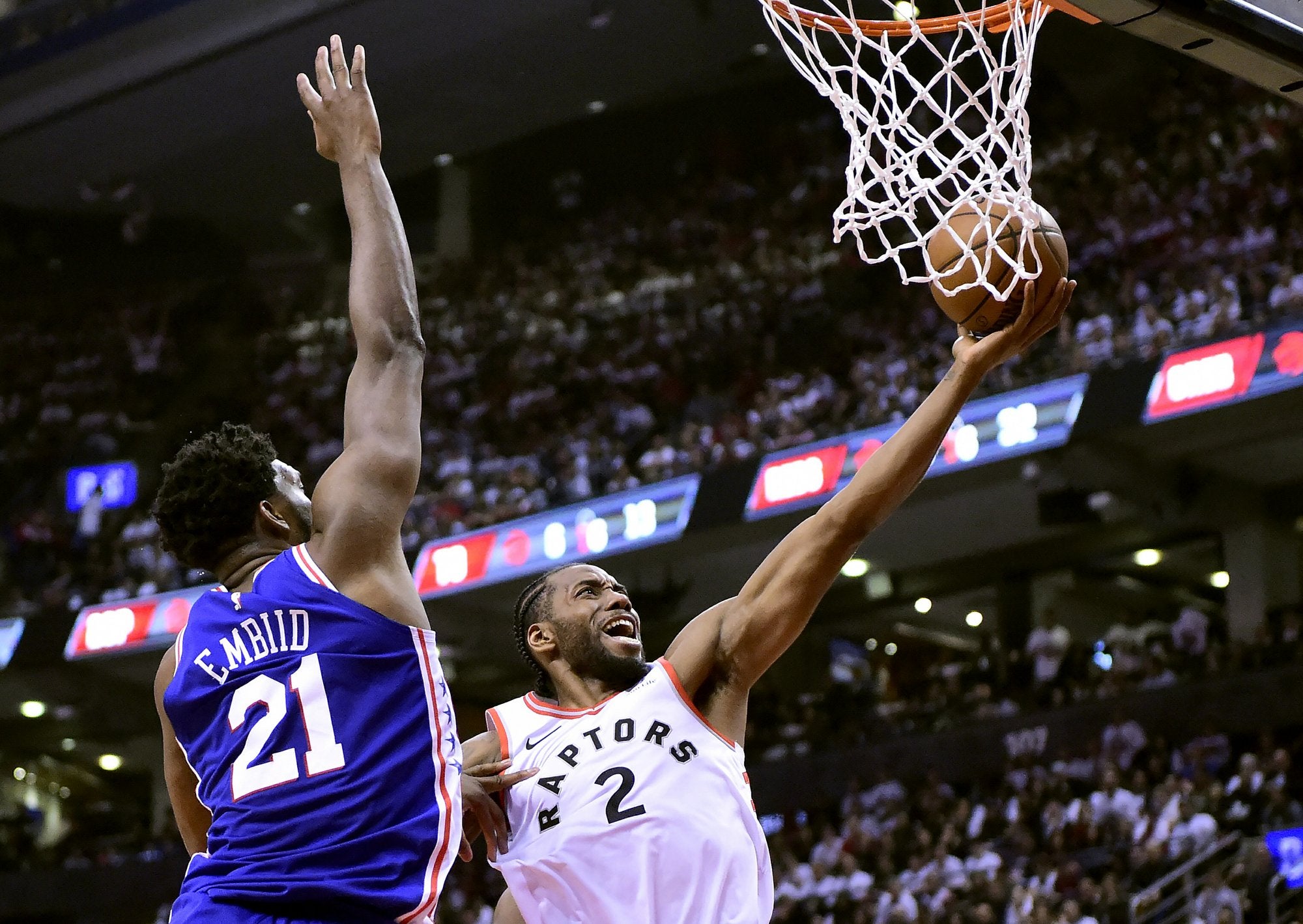 Toronto Raptors forward Kawhi Leonard (2) drives for the layup as Philadelphia 76ers center Joel Embiid (21) defends during the second half of Game 1 of a second round NBA basketball playoff series, in Toronto on Saturday, April 27, 2019. (Frank Gunn/The Canadian Press via AP)

TORONTO — Kawhi Leonard wasn’t interested in putting up a career-high point total against the Philadelphia 76ers. Even as history beckoned, Toronto’s understated star was hoping he could take a seat on the bench.

Leonard scored a career playoff-high 45 points and grabbed 11 rebounds, Pascal Siakam added 29 points and the Raptors beat the 76ers 108-95 in Game 1 of their Eastern Conference semifinal series on Saturday night.

Leonard’s previous postseason high was 43, with San Antonio against Memphis on April 22, 2017. He matched that by making a pair of free throws with 4:45 remaining, then topped it by draining a jump shot on Toronto’s next possession.

Although he appeared focused on reaching the mark, the opposite was actually true.

“A big-time performance at both ends,” Nurse said. “I just like the force he’s playing with at both ends.”

Philadelphia coach Brett Brown said Leonard is “leaps and bounds” ahead of the player he once coached as an assistant with San Antonio.

“The variety of ways that he scored and could get his shot off on some pretty good defensive players and big athletes was incredibly impressive,” Brown said.

Leonard received a standing ovation when he checked out with 3:14 to play and the Raptors up 107-88. He’s just the second player in Raptors history to eclipse 40 points in a playoff game. The other was Vnce Carter, who scored 50 against Philadelphia in Game 3 of the second round on May 11, 2001.

“Kawhi was just in the zone,” Toronto’s Kyle Lowry said. “He probably could’ve had more, but he facilitated some and made some shots.”

“He’s as good as there is in the NBA at generating his own shot, and then making tough shots,” Redick said. “Clearly we need to figure out what we’re doing with him and Siakam.”

Lowry had nine points and eight assists as the Raptors led by as many as 20 en route to their fifth straight postseason victory, extending a franchise record.

Toronto won its 14th consecutive home meeting with Philadelphia and improved to 22-3 against the 76ers since the start of the 2013-14 season. No other opponent has beaten Philadelphia more often over the past five seasons.

Tobias Harris had 14 points and 15 rebounds, and Redick scored 17 points for the 76ers, whose four-game playoff winning streak was snapped.

Embiid missed nine of his 13 shots in the first half. He finished 5 for 18.

Toronto improved to 3-14 in the first game of a playoff series, winning an opener for the first time since a first-round victory against Washington on April 14, 2018.

The only other time Toronto won a playoff series opener was 2001, when Carter’s Raptors won Game 1 of the second round at Philadelphia. Toronto lost that series in seven games.

On Saturday, hot starts from Leonard and Siakam put Toronto in control early, and Lowry fuelled a pivotal 10-0 run in the third quarter that kept the Raptors comfortable.

Toronto’s first bench points came on Serge Ibaka’s jump shot with 1:57 left in the third, a basket that put Toronto up 89-70. The Raptors finished with 10 bench points, seven from Ibaka and three from Fred VanVleet.

Leonard and Siakam both shot 7 of 9 and scored 17 points as Toronto jumped out to a 14-point lead in the first quarter. Down 7-2 early, the Raptors immediately reclaimed the lead with a 9-0 run and went almost eight minutes without missing a shot, hitting on 13 straight from the field. Toronto was up 39-31 after one.

“It was big to have those two guys step up and jump-start us,” Nurse said.

Leonard scored 10 more in the second and the Raptors led 61-52 at halftime.

76ers: The 76ers made 16 turnovers, leading to 22 points for Toronto. … Philadelphia went 0 for 7 from 3-point range in the second quarter. … The 76ers had 13 offensive rebounds to Toronto’s two.

Raptors: Leonard has never played on the losing team in 14 career games against Philadelphia, including four this season. … Siakam scored a career playoff-high 30 points against Orlando in Game 3 of the first round.

Toronto has held its opponent below 100 points in each of the past five games.

Game 2 is Monday night in Toronto.

Read Next
Now or never
EDITORS' PICK
Novak Djokovic crushes Tsitsipas to win 10th Australian Open
Things you can do with vivo Y02s’ upgraded 3GB+64GB storage
Labor groups slam planned importation of 450,000 MT sugar
Viral phone HONOR X9a 5G launched at P16,990
House energy committee chair Arroyo bats for cheap electricity
Philippines to offer VAT refund to foreign tourists by 2024
MOST READ
Jaja Santiago acquiring Japanese citizenship, out for Philippine team–De Brito
Paolo Contis on real score with Yen Santos: What you see is what you get
Peter Rosalita gets standing ovation from America’s Got Talent judges, crowd: ‘No hiccups’
A crown and sash, a necklace and a kulambo
Don't miss out on the latest news and information.