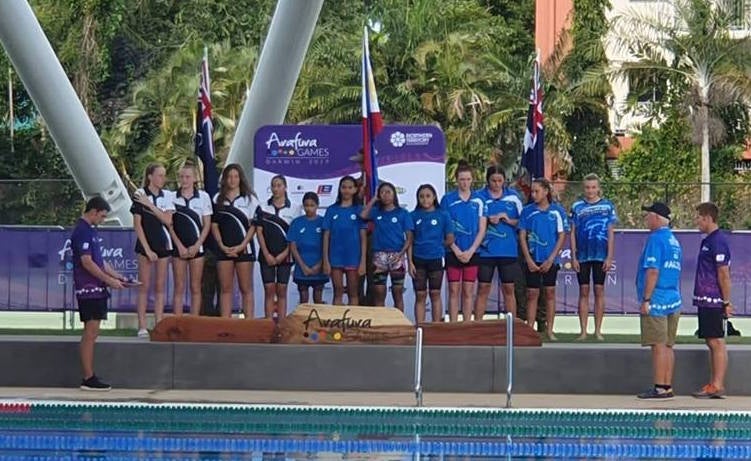 Amogius captured the gold medals in the 13-14 100-meter backstroke and 200m individual medley in swimming while Cabalo ruled the men’s 400m run and the men’s 4x100m relay in athletics to lead the Philippines’ haul of 10 gold medals in Day 1.

The 13-year-old Amogius finished with a time of one minute, 10.53 seconds in the 100m backstroke, around two seconds faster than Western Australia’s Taila Jane Wilkinson (1:12.19) who won the silver.

Amogius then clocked in at 2:33.63 in the 200m IM, around three seconds faster than what Wilkinson tallied in the tiff that was held at Parap Swimming Pool.

Cabalo, meanwhile, cruised in the 400m run finishing the course at 50.73 seconds, two seconds ahead of Northern Territory’s Blair Andrews (52.08) who won the silver and bronze medalist Joseph Salmon (52.34).

National University’s stalwart then teamed up with Joviane Calixto, Jason Buenacosa, and Romel Bautista to conquer the 4x100m relay with a time of 43.49 seconds blazing past Northern Territory and Malaysia.

“I’m really happy and I broke all my times. I’m very, very happy and honored to swim for the Philippines because it’s my country and I’m proud to be a Filipino,” said Amogius.

“This is my dream to take a gold medal here in Australia because the competition here is something else,” said Cabalo.